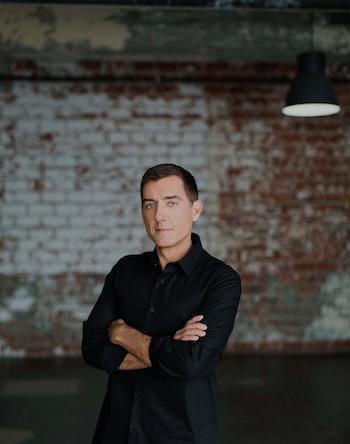 In Ask a Prophet, we use our alien probes on the brains of sci-fi, fantasy, and speculative fiction writers. This week, we spoke to Justin Cronin, the bestselling author of the epic The Passage trilogy about research, why we’re drawn to apocalyptic scenarios, his favorite shows, what’s happening with that film adaptation, and more.

Your books involve a lot of significant time jumps and a wide cast of characters. How do you keep track of everything?

By trying to hold it in my head. I don’t want to say bookkeeping is not a good way to write, because a lot of people do it and it’s enormously helpful. It just doesn’t feel right to me. I try to write with a full sense of the story occurring simultaneously in my mind. To write The Passage, I did indeed have to grow a couple of hat sizes to manage it. Of course you make a few mistakes, that’s why I have a copy editor who keeps track of all the details and if I’ve made an error in continuity, she’s marvelous at catching these things. But generally speaking, I feel like a book senses itself. The story knows itself, and that’s the only way for the writer to make decisions about what to include and what to leave out.

That’s really what writing is. The same way a well told joke is one that is always headed toward the punchline — a novel needs to do the same thing.

For the science parts of the story — the virus, the genetic experiments — did you do much research?

I don’t have any particular background in science; I was an English major in college. But I’m also 53 years old and a person who has curiosity about the world, so over a lifetime, you do absorb enough information to know what you don’t know and need help with. For instance, a former student of mine was ROTC and became an infantry officer in the U.S. Army. Whenever I had a military question I couldn’t answer, I’d ask him. I had a guy who’s a police officer. I have a friend who’s a biology professor. I would go to these people and get help. Sometimes I would do this before I wrote, and sometimes I would do it while I was writing.

Is there any book that most pleasantly surprised you in the experience of writing it?

They were all surprising in the sense that I knew where the story was going, but with each book I was operating in new territory to some extent. The first book is a giant road novel. It’s more like The Odyssey than anything else. The second is a novel about occupation and insurgency and a police state. So I had to dig very carefully about that. The third book surprises me because I enjoy the villain so much.

What are some of your own favorite books?

There’s a moment when you’re writing a novel when you feel like you’ve run out of sentences. I’ll go to certain writers for refreshment then — to be reminded of the infinite variety that language can provide. One of those writers is Ian McEwan. People can be surprised that somebody who writes a 2000 page apocalyptic epic would find so much in the pages of a substantially quieter British novelist, but I don’t think he’s ever written the same sentence twice. I’ll reread one of his novels when I’m feeling depleted, and it’s like getting my gas tank filled back up.

And what about TV shows — are there any you currently enjoy?

Television has become very similar to reading novels as people experienced it in the 19th century. Novels back then would often be published in serial form, so people would get the new Dickens novel spread out over a long period of time. One thing about a book tour is you often get caught up on your favorite televisions shows while you’re in your hotel room. I remember for The Passage tour, I spent the whole time inside The Wire. A show I love and was getting caught up on last night is The Americans. I think it’s one of the best shows we’ve ever had about marriage in general.

Why do you think post-apocalyptic is popular right now?

It comes in waves and periods of time in which there’s a high level of public anxiety. I was born in 1962, so I’m a Cold War kid. I grew up under the shadow of the greatest threat ever to the planet, which was 10,000 nuclear missiles on one side of the globe pointed and 10,000 nuclear weapons at the other side of the globe. Civilization could have been eradicated in about 40 minutes if a state got too angry. So there was a great flowering of those kinds of books and I read them all. It was the anxieties of my era.

Of course, in 1989 that threat kind of evaporated when the Soviet Union broke apart and we came to understand how insufficient their technology really was. The Cold War had been, in some ways, a ghost. But 9/11 created all that anxiety that had been waiting in the wings. After 9/11, the things that make us anxious are much less clear. One good thing about the Cold War was everybody knew exactly what to be afraid of. Since then, our anxieties are more confused. What’s the threat? It’s a guy walking in a subway with a bulky overcoat. It’s global warming, which is this slow-motion catastrophe. So these books are coming back and the reason we read them is literary experience catharsis.

When you read a story like that, two things happen. One is, because you are witness to it, you are automatically cast as the role of a survivor of this catastrophe, because you’re seeing it unfold. Everybody who watches The Walking Dead is putting themselves in the place of Rick’s resourceful crew. So it’s kind of reassuring about your own resourcefulness. Then of course, the books or the TV show ends or movie ends. We look up and the beautiful green-blue world is still here. That’s another reassurance to you.

We’re going to see these stories in great profusion in years to come. They never really go away.

The Passage has been optioned for a film adaptation for a while — is there any news on that front?

Here’s what I am permitted to say: There are plans afoot, it could become a “major television event” through FOX Studios.

Would you be involved?

Yes, in some manner. I think television is the right format for this story. One, television accommodates large stories. A good television show goes for a number of seasons, it has many characters, it naturally leads to ensemble storytelling. And television right now is excellent. It is being run by writers. Accomplished writers of fiction are indulging in television! Sometimes it’s a side project, sometimes they throw themselves in it wholeheartedly. But it’s produced a tremendous profusion of great TV.

You get a group of people together and at some point somebody says, “what are your favorite shows?” They didn’t say that in the 1970s. What would they have said, Three’s Company? I grew up with the worst television imaginable. Movies were good. But I’m not somebody who wants to work in Hollywood in a large way. I see myself as a novelist, it’s what I love, it’s my specific skill, it’s what I have to offer. So that’s what I’ll always do. But in formulating this particular complex story, I’m the guy who has the whole thing in his head. That’s enormously helpful.

I have about 10 years worth of backlogs of ideas. I have long lists of projects that I might take up next. The interesting thing I’ve found is that an idea that captivated you five years ago and had to put aside may not be the one that catches you now. I’ve been writing The Passage for 10 years. I started when I was in my early 40s and I’m in my early-ish 50s. I began this project with a kid in elementary school and a kid who was two years old. He’s now a teenager and the little girl is a freshman in college. So I find myself in a rather different phase of life. The ideas that captivate me now follow accordingly.

So we’ll see where I go next. You can’t comfortably stop writing if you’re a writer. It makes your brain feel empty and mournful. Right now I’m on tour for The City of Mirrors. It’s not a time to write, to be honest. It’s a time to make sure you get three reasonably nutritious meals a day, sleep, and use a lot of Purell. But in five weeks or so, I hope I’ll have something ready to go.

The one thing I asked my publicist to do for my book tour is, I don’t care if it’s the Hampton suites at the airport — put me in a hotel that has a pool in it. I’ll go and swim laps for an hour, and that’s when I do all of my thinking. So I hope that 17 swimming pools in the next four weeks will get me ready to go!