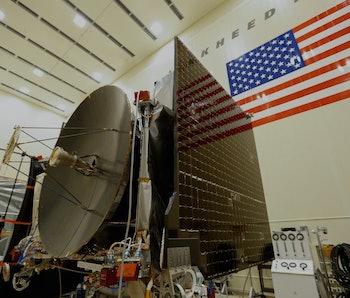 This afternoon, NASA announced that it will launch its OSIRIS-REx (which stands for Origins, Spectral Interpretation, Resource Identification, Security — Regolith Explorer) spacecraft on September 8th. The launch will take place at Cape Canaveral Air Force Station, aboard a United Launch Alliance Atlas V rocket from Space Launch Complex 41. OSIRIS-REx’s job will be to complete the first U.S. mission to sample an asteroid. The spacecraft is expected to reach its destination in 2018 and return a sample to Earth in 2023.

The spacecraft, built by Lockheed Martin Space Systems in Denver, is expected to retrieve at least 60 grams (2.1 ounces) of surface material from the asteroid known as Bennu (formerly 1999 RQ36). The purpose of the mission is to study the samples for what scientists suspect might be clues about the origin of the solar system hidden within the years of space dust. Scientists also believe that samples from Bennu might hold information about how water and organic molecules could have eventually made their way to Earth. Next Tuesday, a free talk at the Library of Congress will detail the mission’s objectives further, and discuss the possibilities of what can be done with the resulting samples. “OSIRIS-REx will return the largest sample from space since Apollo 17,” said Jason P. Dworkin, chief of the Astrochemistry Laboratory at NASAs Goddard Space Flight Center in Greenbelt, Maryland. “Like the Apollo missions, OSIRIS-REx samples will be available for the world’s best laboratories to study and unlock the secrets of our origins.”

Though this will be the United States’ first attempt to land on an asteroid, it is not exactly the first mission of its kind. Back in 2014, the European Space Agency’s Rosetta space probe made headlines when its Philae lander completed a successful landing on a comet known as 67P/Churyumov-Gerasimenko, fully completing a mission that began back in 2002. The Rosetta was the first-ever spacecraft to orbit a comet and then land on its surface.

To keep the hype going, NASA launched an art contest back in February that invited creative types to send their work to Bennu. The spacecraft’s twitter account has been updating frequently to detail its trip halfway across the country in preparation for that September 8th launch. For those curious about where to watch the launch live, the details are slim, but chances are you’ll find it on NASA’s livestream or on their YouTube channel.