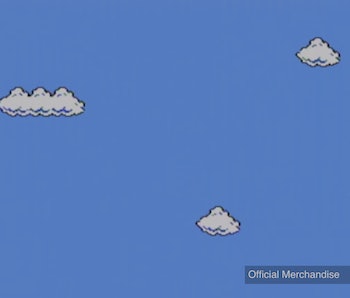 In Cory Arcangel’s world, art is clickbait and clickbait is art. Art is also the banality of rental-car insurance photos, recycled paparazzi shots of celebrities, and a six-minute YouTube videos of the clouds from Super Mario Brothers floating by.

Arcangel has been coopting all of the internet’s assorted trash, gems, and moments of brilliance into subversive modern art since he decided to give up classical guitar and enter the art world’s clusterfuck 15 years ago. His works include a photo series of pictures he’s taken for rental-car insurance reasons, blown-up paparazzi photos of celebrity crotches and hacked computer games in which avatars act out all of our existential dread by failing to win again and again.

“I wanted to show every possible variation on the type of imagery you would see in your day-to-day life,” Arcangel told the Guardian.

Arcangel has a new show at the Lisson Gallery in London called currentmood, which incorporates a giant amalgamation of his photos, videos, and appropriated images displayed in identical sizes on a blank wall, blurring the lines between mediums, according to The Guardian.

He’s also drawn upon his background as a musician to create aggregation-art music. Check out this video, where he edits cats stepping on keyboards into playing the melody of Drei Klavierstücke op. 11, a famous Schoenberg composition.

And, of course, here’s his 2002 project “Super Mario Clouds.” You can watch the video, but we promise, it’s literally just six minutes of the clouds from Super Mario Brothers going by.

Arcangel’s work certainly isn’t traditional, but it does reflect some of the endlessly recycled-to-the-point-of-nihilism attitudes that permeate pop culture these days. Arcangel isn’t afraid to appropriate, distort, or amplify the subtle absurdities of everyday life, calling into question the things that entertain, shock, disturb, or even bore us. If art is a reflection of life, he’s definitely nailed the 21st century.