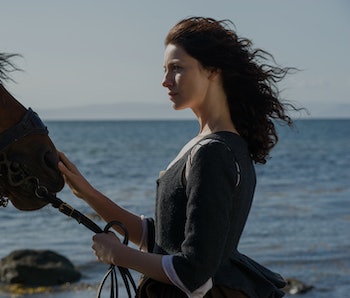 Game of Thrones and Outlander are often compared, even though their only true commonality is that they’re both shows based on doorstopper book series with rampant fan bases. Also, critics like talking about how both handle sex. Game of Thrones is a sprawling mediation on power and corruption across several fictional lands and an endless string of families; Outlander is an intimate portrait of a marriage, with some time-travel and Scottish history thrown in.

But they do share an unusual and important element that isn’t addressed nearly as much as their so-called similarities: both are shows airing in the 20-teens Golden Age of TV, but their source material was originally published in the ‘90s. This puts their adaptations in uniquely difficult positions, because the way we talk about sexuality and rape — two topics that come up with frequency in both stories — has evolved a great deal over the past sixteen years. And both shows have clearly grappled with the pressure to stay true to the source material yet update its more questionable turns for our current times. Intriguingly, the shows often take opposite approaches.

Game of Thrones has gotten a lot of flack over the years for going an oddly pro-rape route — adding dubious questions of consent to scenes where none existed in the books (Daenerys’s wedding night with Khal Drogo; Jaime and Cersei’s sex at Joffrey’s funeral; Sansa’s violent rape). The issue with the depiction of sexuality in the books is more related to representation, because aside from Loras Tyrell, Renly Baratheon, and Oberyn Martell, there is a noted absence of LGBTQ characters. When asked if he would add more, George R.R. Martin said:

I’ve had letters from fans who want me to present particularly an explicit male sex scene. Most of the letters come from women. I’m not going to do it just for the sake of doing it. If the plot lends itself to that, if one of my viewpoint characters is in a situation, then I’m not going to shy away from it, but you cant just insert things because everyone wants to see them.

Martin’s attitude reflects a cultural conversation around homosexuality in the ‘90s. If you were an author who wasn’t interested in the subject, you’d see no point in including it in your world. But in today’s world, a mainstream show looks odd omitting it.

The show has adjusted by including a few more male/male sex scenes than are in the books. The rape front remains an ongoing area for improvement.

The Outlander books, on the other hand, are filled with so much rape, it begins to feel like a less serious subject, and its depiction feels almost absurd. By the fourth book installment of the series, every member of the main family — father, mother, daughter, — has been raped. The father and daughter even bond over their experiences with rape. Even in the first novel, Claire and Jaime, the main couple, have some sexual encounters where the consent is dubious.

We look on that today with raised eyebrows, but when the novel was written, the “forced seduction” trope was very much mainstream in ‘80s and ‘90s romances. The show wisely realized it wouldn’t play well onscreen to today’s viewers and tweaked the scene (in “The Reckoning”) to be more consensual.

Both shows have stumbled in some areas and succeeded in others — but they have harder paths to walk than other shows of their ilk, being uniquely beholden to a story around which the conversation has changed. Going forward, Outlander will have to make some choices about whether it wants to include all the rape the later novels featured, and Game of Thrones will have to decide if it’s ready to listen to its audience’s response. The ride will not be smooth for either show, but it will be fascinating to watch.