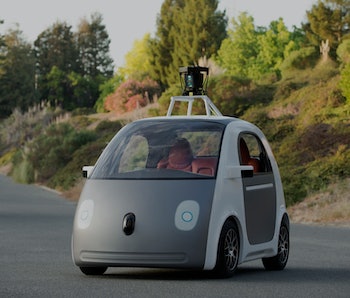 This week, Google was granted its patent for a solution to the fears of anyone who has ever worried about being struck by a self-driving car. While the idea may not stop a car from hitting someone, it aims to keep the victim from sustaining potentially worse, or fatal injuries. The patent, granted on May 17, is a simple solution that needs no app to function: an additional adhesive layer to the vehicle’s outer shell.

The idea is just as simple. Where most accidents that involve a pedestrian being hit can often result in the victim being flung elsewhere, or even back into traffic, the adhesive will act to “stick” the victim directly onto the car, avoiding further injury. The patent breaks it down in more scientific terms:

While it is not yet confirmed that Google plans to implement the sticky outer layer to their own self-driving cars, the patent’s focus on this technology being made available for self-driving cars makes it obvious. The patent also states that the adhesive can potentially be used on other kinds of cars. The patent is needed at a time when pedestrian traffic fatalities are rising at a worrying pace, and is driven by the need to keep self-driving cars as safe in functionality as possible — even when they’re not.