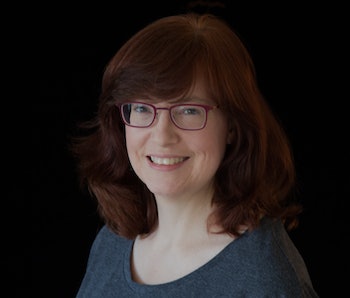 In Asking The Prophet, we probe the brains of sci-fi, fantasy, and speculative fiction writers. This week, we spoke with Elizabeth Bonesteel about spaceship mysteries, coming up with futuristic technology, and more.

What comes first for you, world-building or characters?

I’m one of those people who plots as I go. I get a bunch of characters together and then I kind of throw them in a pot and see what comes out of it. Characters will dictate the world-building sometimes. Then you have to create a different situation or even a technology that puts them in a place where they need to go.

How do you go about creating a technology?

I was actually writing this morning about how we’re somewhat limited in our ability to create future technologies. When we think “this would be cool” or “is that even possible” — all of it comes from our knowledge of science today. I created screens and the communications that were projected — almost holographic — so you could brush them out of the way with your hand. That seems like a natural progression of things that we have today with touch screens. Five years from now, who knows where things will be? That might look ridiculous.

Do you read a lot of sci-fi?

I read a lot more sci-fi when I was growing up. I picked it up again recently. In the late ‘80s and early ‘90s, I kind of gave up on science fiction. I stopping seeing it as much that looked interesting to me on the shelf and I started gravitating towards mysteries. That’s probably why I’ve essentially written a mystery novel set in space.

What’s some of the stuff you’ve read recently that you enjoyed?

I just finished Half-Resurrection Blues by Daniel Jose Older. It’s an urban fantasy and somehow I had it in my head that I didn’t like urban fantasy, but it was a remarkably entertaining and well-written book. I just started Radiance with Catherynne Valente the fact that her entire prologue is a defense of the existence of prologues is something that I really love. I’m catching up on The Expanse. Those are the main ones.

How have you seen the genre change during your time in it?

There’s a lot more mix up of genres then there used to be. Or at least people are somewhat less shy about that sort of thing. I think of Mary Robinette Kowal and some of the romantic plots she writes. That sort of thing is more common and accepted in science fiction than it was years ago. I grew up reading science fiction that I bought at a drugstore on this little tiny shelf in the back. It sort of felt like this big secret that nobody else knew about. It wasn’t something that you generally told everybody about if you found a book that you really liked. But now it seems like things have opened a lot and there’s a lot of cross-genre stuff that’s going on right now that’s just exploding.

Why do you think there is more cross-genre writing?

I think a lot of people like me grew up. When I was young, it was often viewed as almost a kid’s genre. You’re seeing the same thing with graphic novels — people who grew up with comic books are now adults and they still recognize it as powerful and vital storytelling. Science fiction is the same thing. It’s become serious because the people who took it seriously are now out in the world and have some economic impact on it.

What do you think is the value of sci-fi?

When you pick up a science fiction or fantasy book, you know you’re not going to be reading about the world you live in now. That can allow people to consider ideas or concepts that may be very different than things they would have entertained in the context of reality. If they can project it onto this fictional universe, it can be more thought provoking than just a blatant political argument with somebody. You play these “what-if” games and think about it in a way that’s both, in a sense, more interesting than the real world and less threatening to the core beliefs you’ve already got. It’s a less confrontational way of presenting some of the possibilities.

More like this
Entertainment
10 hours ago
Rick and Morty’s scariest episode ever copies the best sci-fi of the year
By Corey Plante
Entertainment
9 hours ago
Vesper is a breathtaking sci-fi warning about our real-life future
By Eric Francisco
Entertainment
8 hours ago
House of the Dragon makes the darkest Game of Thrones plotline even darker
By Mónica Marie Zorrilla
Share: