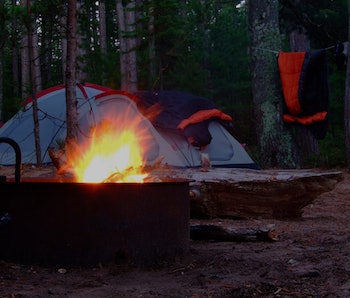 You know that friend who takes frequent smoke breaks and unironically states that he’s going out “for some fresh air?” If you like camping, you’re that Guy. Here’s why: Tents are sprayed with a fire retardants before they are sold because people are bad about following guidelines like “For the love of God, you’re not supposed to cook IN your tent.” What does that mean? Pretty much that you spent that night in the wood inhaling toxic chemicals.

A new study published in Environmental Science and Technology has found that campers are regularly exposed to toxic chemicals because manufacturers treat tent fabrics with flame retardants.

The researchers analyzed skin swabs from the hands of volunteers who set up 15 different tents, as well as air samples from inside the tents. The most common flame retardant compounds were organophosphates, a neurotoxin that is also used as a pesticide and has been linked to the death of at least 25 children in India.

Levels of these compounds on the hands of volunteers who set up tents were up to 29 times higher than they were before. Air samples suggested that a person sleeping in a tent for eight hours would inhale between a few and 400 nanograms of these chemicals per kilogram of body weight. That’s still well under the acceptable daily dose set by the U.S. Consumer Product Safety Commission, which is 5 micrograms per kilogram of bodyweight, but the researchers say that recognizing all sources of exposure is important because effects are cumulative. Babies and children are particularly vulnerable to exposure and health effects.

Increasingly, the value of flame retardant chemicals in home fabrics, furnishings, and electronics is a matter of debate, as some experts doubt their effectiveness and others point out health risks.

When it comes to tents, avoiding putting open flames in our near tents is a far more effective solution than chemicals when it comes to avoiding waking up in a ball of burning, molten plastic.