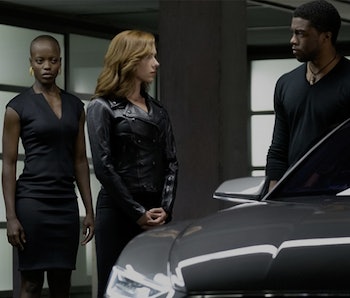 We can all agree that Black Panther was the real victor in Marvel’s cinematic Civil War, right? The film even devoted one of its two post-credits sequences to an enthralling exterior shot of Wakanda — gigantic panther statue, oh my! Is that thing just chilling with its mouth open, over people’s backyards when they’re having barbecues, or does it greet you at the gates like The Argonath on the River Anduin?

In the coming months, we are going to learn, collectively, a good god great ton about Wakanda, the fictional African nation now led by T’Challa (Chadwick Boseman). It appears the MCU will continue the comic book tradition of considering Wakanda the most technologically, socially and economically advanced nation in the world, due in part to the country’s vast vibranium mines — you know, the metal that was used to build Cap’s shield, Wolverine’s spine, Black Panther’s costume, some of Hawkeye’s arrow tips, and a great deal of Avengers tower?

In order to protect its natural and tech resources, Wakanda looks to its leaders, and those leaders’ version of the Secret Service, an all-female team of master combatants known as The Dora Milaje (dora-meh-LAH-shay). One of the warriors actually made a quick appearance in trailers for Avengers: Age of Ultron, but she was removed from the final film.

While they weren’t called out by name in Civil War, we did get an intriguing tease when an unnamed character played by Florence Kasumba told Black Widow (Scarlett Johansson), “Move. Or you will be moved.” Although Black Widow steps aside, T’Challa admits that he’d be interested to see a fight between Kasumba’s security chief and the Russian ex-spy.

You’re not the only one, BP. Fans are already clamoring for more information on the Dora Milaje, though it hasn’t been confirmed that the Wakandan crew, or Florence Kasumba, will make an appearance in Black Panther.

The Dora Milaje first appeared in a 1998 Black Panther comic. They are customarily led by a character named Aneka, who may be the woman Kasumba was playing in Civil War. While the original group was formed with the intention of training each girl as a future wife, T’Challa, in the comics, reinstated the Dora Milaje as a military faction. In the MCU, though, it appears the Dora Milaje are already functioning in some form before T’Challa takes power, so that timeline might be altered in Black Panther.

In the comics, the Dora Milaje have worked alongside Deadpool and Storm, and they have a particular interest in defeating Doctor Doom.

The Dora Milaje also play a vital role in the war against Thanos (known to MCU fans as the Infinity War) — they actually defy T’Challa at an inopportune time and leave him hanging. They decide, instead, to follow T’Challa’s sister Shuri, who enjoys a run as Black Panther herself. This is yet another possibility for actress Florence Kasumba — although it’s unlikely that the woman she played in Civil War is T’Challa’s sister, it’s still possible.