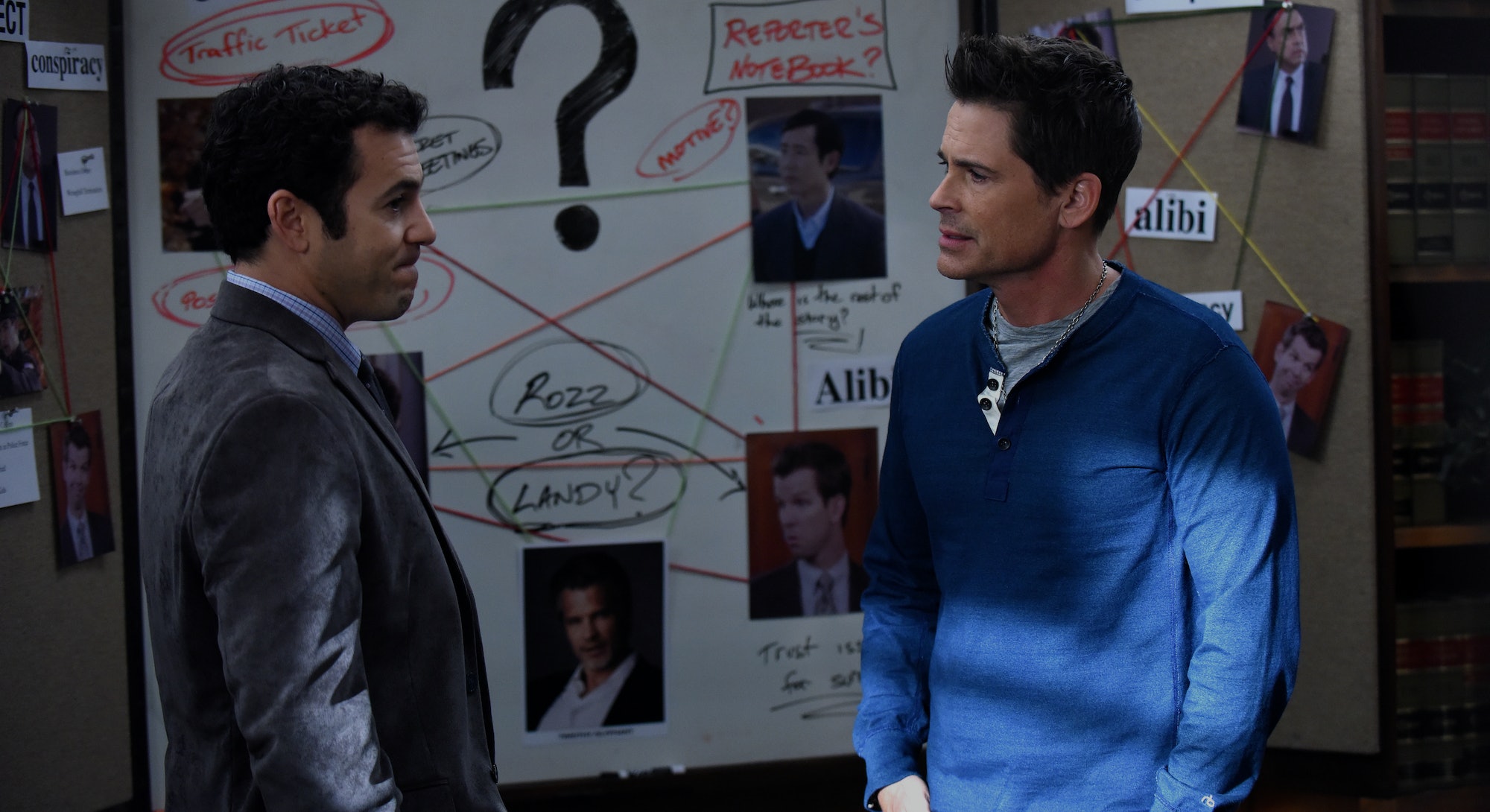 There is no more bizarre or ironic case of life imitating art imitating life than the situation in which The Grinder, the very funny and very endangered freshman Fox comedy, finds itself.

The sneakily subversive sitcom, created by Jarrad Paul and Andy Mogel, stars Rob Lowe as Dean Sanderson, an earnest-but-stupid actor who left his starring role as a dashing lawyer on a ridiculous courtroom drama to try his hand at actually being a lawyer at his brother’s (Fred Savage) real-world firm in Idaho. Dean is wildly unqualified to practice the law, despite (or perhaps because of) his years working on the show-within-the-show, also called The Grinder. He has no law degree; the only skill he brings to the table is recognizing television plot tropes and spouting catchphrases like, “But what if it didn’t?” in the hopes that they’ll lead to real-world breakthroughs. And yet somehow, and to his brother’s great dismay, a lot of people — including his dad, niece, nephew, and co-worker Todd — seem to ignore that reality and have faith that his fictional experience will be of use in the real world.

The idea for the show began with a silly debate: Would you trust Noah Wylie, an actor who starred on ER for years, as your emergency doctor, over some other person with no medical qualifications at all? But it was also a chance to poke fun at both the self-seriousness of television and the growing obsessiveness of its audience.

“It’s this funny thing about how people are fascinated by it, and it is this thing in our culture, it is so important to people,” Paul told Inverse. “But it’s so stupid, and that’s what we’re trying to convey in the show.”

And herein lies the irony: The Grinder, which finishes its first season on Tuesday night, is at risk of not getting a second season, and its early demise would be a shame. The show has earned critical acclaim from insiders and TV critics, and has boasted several memorable guest stars (including Timothy Olyphant as Dean’s Grinder replacement) but Fox has yet to give it the green light thanks to its relatively low ratings. Paul and Mogel reviewed the first season with Inverse ahead of tonight’s finale, and previewed what could be to come if Fox gives them the thumbs up next week.

From the get-go in this show, Dean is the nicest parody of celebrity — and people’s reactions to it — possible.

Paul: We’ve always thought that was a funny dynamic, especially in a town that is kind removed from Hollywood, when someone comes home and they can do no wrong, everyone wants to be supportive.

Did you experience that at all after some early success as writer/directors?

Mogel: Jarrad is a massive star in Miami, Florida.

Paul: We talk about that when we go home. And all our friends, too; as writers, when we go home, it is kind of this foreign thing to people, and they do kind of react to it in a different way than any other business.

Mogel: We always laugh that someone could be a surgeon, saving lives, and they get less questions than we get.

Paul: My cousin is a renowned radiologist in Chicago, he’s one of the smartest guys I’ve ever met, and like, my family could give a shit about him.

The twist late in the season where they needed him to be take on the audacity of his Grinder persona in order to crack a case was a great use of a common trope.

Mogel: That’s a classic moment we love in movies. Where the hero can’t be the hero, and he has to be talked into doing what he does. He needs that speech to motivate him, which is something that Rob’s character has grown accustomed to. You figure in most shows, someone talks him into doing something because he’s the hero.

Paul: We love how Hollywood infects this town, and how he infects it, but it’s also he brings his stupid TV show into this world, and that informs our story. Like that side story episode [Dean gets inspired by his TV character cracking a case during an unrelated subplot]. He’s lived in this TV show world, and can’t help but bring those elements in.

Mogel: Maybe because as viewers we’ve all grown accustomed to these tropes too, and that’s why they can work in Boise. They just seem like natural story turns to people, so they go along for the ride.

When you were prepping to do this show, were there any shows you paid a lot of attention to, for parody purposes?

Paul: I watched some Scandal, The Good Wife. But they’re all so different. CSI: Miami is definitely one that Rob really loves.

Mogel: Rob was obsessed early on, every time Caruso takes his glasses off and delivers a line, Rob was always really interested in glasses work. Thats something we adopted a little bit on our show.

Rob has been on TV for a really long time, and he was on The West Wing and other similar dramas.

Mogel: That’s what makes him so perfect for us. He’s really funny and really willing to make fun of these characters he’s played, and their tropes, and he knows them inside and out.

Paul: Down to, “Oh, I need to turn here.” The blocking ends up being so obvious to him, because he’s done it so similarly in other shows. He did this one show called The Lyon’s Den, after The West Wing, where he was the lawyer. And basically the show within the show of The Grinder, is basically that show. It lasted I think 13 episodes. They did really ridiculous shit on it. He talks about it all the time.

Is there anything he’s not willing to do?

Mogel: I think that’s maybe our problem. People in Hollywood are liking it, but no one else is watching it.

Do you think people have not understood it?

Mogel: It’s not joke-driven, I would say. The comedy is more situational, and the overall story being the comedy, more so than jokes popping like a Family Guy.

Do you have a map of what happened in the show-within-the-show, The Grinder? The clips from that fake show that open each episode are getting more and more preposterous. Is there a Grinder story bible?

Mogel: We’ve been finding it. We really had fun building that world out. Jason Alexander played such a great show creator, and that relationship is endlessly interesting to us. We love that dynamic of whose show it is, and them battling over what that show should be. We’ve had fun laughing to ourselves about how that show degraded.

Paul: It is our favorite part of making the show. We had to say, I wouldn’t say fight to keep them, but there was a little bit of nervousness about doing it every week.

*Mogel: There was the viewer thinking it was actually a drama, that you’d tune in and think you’re watching a different show than you’re actually watching, that’s definitely a concern. We were hoping that if the show really worked, we could make a full episode of The Grinder within The Grinder, and just pull back at the very end and see that the family is watching it.

Does the finale tonight set up for a second season? What’s your strategy or plan for that?

Paul: We weren’t bold enough to do that. I think fans of the show will like how we ended it.

So where is it on renewal? Have you had any indication?

Paul: There’s just so much out there.

Did you try to make it binge-friendly from the beginning?

Mogel: We did but it’s hard because when you’re on a network, you have to first take into account first that people are watching it live. It could be episode six, but a new audience is joining. We didn’t want to have to reset the premise every time.

Paul: They didn’t want us to do any kind of serialization in the beginning. And then I would say around the holidays, thats when we kind of pivoted and serialized it a little bit more, once we kind of got going.

There were doubts that you could keep the premise going this long, and you were able to do that, but say you do get a second season, will you have to make big changes? How long can he think he’s qualified to be a lawyer, or at least active legal intern?

Mogel: We did pitch a second season, and it’s kind of what youre saying. We did hear a lot of that, “How do they keep it going?” We didn’t think it was a hard thing to do, and we still think we can keep going with it, but we have an interesting and fun thing for season 2, if we get to do it, that does involve a shift. In keeping with the essence of the show and what we love about the characters, but it’s a sizable shift.

Paul: It’s a shift like a drama show can shift. Like for example, an idea would be, Cliff Beamis wants to do another show, so the season arc could be, does Dean take a job on another show, and how does that affect the family? Taking it to a different place, story wise.

Mogel: Theres something about the character, that allows us to shift in different ways. He could have other experience in things he’s done, he hasn’t only played a lawyer in his career. There’s something about this character that lets us do and shift into different modes. He can be an expert on more than one thing. Even his grinding skills can be applied to more than one area.

Do you think the title The Grinder’s proximity to the app Grindr caused problems?

Mogel: We definitely heard a lot of that.

Paul: The title has given us so much, and it means so much to the character. The definition of grinding is so applicable and useful. But we’re also aware that it’s the dumbest fucking title in the same time.

Mogel: But that’s part of the thing, we were naming the show-within-the-show, and was like, what would htey name this show? And The Grinder just seemed right. We know there would be things that came with it, but we definitely think we got more out of it than it hurt us.