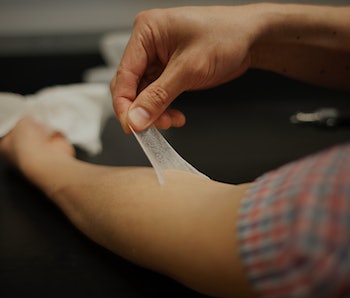 Face lifts and skin tightening procedures have turned plastic surgeons into millionaires, but scientists developing a liquid “second skin” could put them out of business — at least temporarily. Researchers publishing in the journal Nature Methods report that their new silicon-based polymer can tighten human skin, smoothing out wrinkles and instantly reshaping eye bags, for up to 24 hours.

The substance is oddly reminiscent of dried white glue, which bored elementary school kids everywhere peel off their hands in stretchy sheets. Developed by researchers at MIT and Massachusetts General Hospital, together with Living Proof and Olivo Labs, it’s been shown to mimic the mechanical and elastic properties of healthy and youthful skin after it’s applied. Early tests have shown it helps skin hold onto moisture as well as snap back to its original state after being stretched over 250 percent (normally, our skin only stretches 180 percent).

While its cosmetic implications are obvious — peace, Botox! — the scientists are hoping it can be used medically; it could easily be repurposed as a form of protection against the sun’s harsh UV rays or as a way to deliver drugs for skin conditions like eczema and dermatitis.

They discovered the substance after combing through a library of over 100 synthetic polymers — molecules that are made up of many repeating units — that contained siloxane, a structure made up of silicon and oxygen atoms. The goal was to create a material that behaved like skin; a chemical feat that is notoriously difficult to achieve. Their final choice optimized flexibility, comfort, and skin-tightening ability as well as optical properties — “otherwise it won’t look good,” the paper’s senior Robert Langer, Ph.D., said in a release.

They settled on a chemical that’s smeared onto the skin in cream form in a two-step process: The siloxane components are applied first, and then a second ointment — a platinum-based catalyst — is spread on top, causing the siloxane subunits to link together in a strong, chain-like film across the skin’s surface and become essentially invisible.

Olivo Labs is spearheading the development of the substance for medical purposes, but it’d be a safe bet that the youth-chasing cosmetic industry won’t let it go unnoticed.

More like this
Science
8.5.2022 1:00 PM
The most miraculous sci-fi movie on Netflix reveals a scientific debate over aging
By Tara Yarlagadda
Science
8.3.2022 3:44 PM
Ground-breaking technology restores dead organs back to a life-like state
By Miriam Fauzia
Science
7.31.2022 1:00 PM
How do cats co-exist with each other? The answer may lie in their gut
By Tara Yarlagadda
Related Tags
Share: