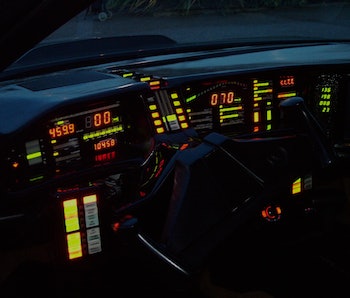 Flashy rides were an integral part of 1980s sci-fi and, because filmmakers spent the entire decade trying to perfect the cockpit shot, interiors and displays became just as iconic as sculpted hoods. Designers went to town on dashboards, gifting the most memorable sci-fi whips with CRT displays, voice synthesizers, and lots and lots of LEDs. But the interfaces were far from prescient. No one saw monitor-style screens in today’s Teslas (and pick-up trucks) coming. But what they did envision was, though silly, beautiful in its own right.

The auto industry would agree with that assessment. Detroit spent the middle of the decade taking cues from sci-fi movies and TV shows, making “futuristic” dashboard standard fare in mid-priced cars. The results, notably the hyperspace-ready DOS-knockoff embedded in the 1984 Chrysler Lazer, were ridiculous. Eventually, manufacturers moved on. That was good news for drivers given that LED heavy displays were unreliable, hard on the eyes, and, in some cases, distracted drivers to the point of causing accidents.

Still, those cockpit shots were great and those dashboards deserve one last read.

Knight Rider’s KITT 2000 was the ultimate ‘80s car on the inside and out. With the exterior of a Pontiac Trans Am, KITT’s interior was the pinnacle of digital dashboard technology. With a gullwing steering wheel, digital equalizers, and all those glorious LED gauges, KITT’s interior was basically an arcade game complete with A.I. For the next five or so years, all GM cars tried and failed to emulate KITT’s high-tech displays in one form or another.

The good news is time need not be a barrier for a kick-ass, Knight Rider-inspired dashboard. There are several companies (still in business in 2016) that sell KITT 2000 dashboard kits, and will turn your Toyota Camry into the KITT your inner David Hasselhoff desires.

By the time the Back to the Future debuted in 1985, the DMC-12 was already a bit of a pop culture joke: the car’s designer, John DeLorean, had recently been acquitted on cocaine smuggling charges, purportedly, to keep his struggling motor company in business. The sad part is, before Doc Brown installed the flux capacitor, one of the the DMC-12’s selling points was it’s classy, if not understated interior.

Nevertheless, the most recognizable feature might be it’s iconic digital calendar. While production vehicles didn’t have the keypad input (or of course, the ability to travel through time), dashboard digital clocks found in just about every production vehicle on the market were pretty much identical to Doc Brown’s DeLorean’s display for the next decade and a half.

For those unfamiliar with the very short lived ABC series created to compete with Knight Rider, Automan was a hologram artificial intelligence who could turn himself into a very tangible Lamborghini Countach. There is probably nothing more 1980’s than the interior of the car – because Automan himself was literally the interior.

Glowing blue suit aside, some car companies in the mid ‘80s began to play with the idea of giving cars a faux-android personality. Chrysler and Dodge K cars came equipped with a “Electronic Voice Alert” that sounded like a very rudimentary version of Siri. “E.V.A” was so irritating (and creepy), Chrysler scrapped the project after a couple of years due to customer complaints.

Moving past the fact that he used his super cool spaceship car to abduct young boys so they might be indoctrinated into a intergalactic military unit, Centauri’s Space car was pretty much the quintessential 1980’s sci-fi interior. Gullwing steering, lots of LED gauges, and an 8-bit navigation screen, were all pretty much accepted as the future of production car interior aesthetic.

Weirdly enough, though a flying cars from Blade Runner known as Spinners are probably the least feasible in terms of exterior design, their interiors are probably the closest in terms of predicting 21st century dashboards. Aside from the gull-wing steering wheel, the interior of the spinners, with 3-D navigation and a large control screen isn’t too different than the technology in late model Audis and Volvos.