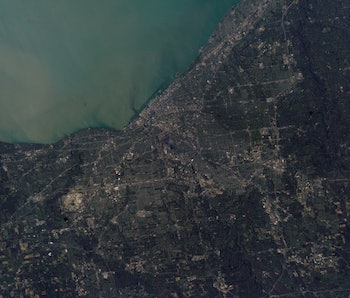 By the end of the 1940s, Cleveland was a boom town with a population over 914,000. As of 2013, the U.S. Census Bureau placed the population at around 390,000. That’s a staggering 58 percent reduction over six decades. Like other Rust Belt cities, Cleveland is clearly not what it used to be.

“Cleveland has always been a kind of big manufacturing center, given its central location and connectivity to the rest of the country,” says Terry Schwarz, the director of Kent State University’s Cleveland Urban Design Collaborative (CUDC). “As industries downsized, especially the steel industry, there were fewer jobs, and that led to migration and population loss.”

But those numbers aren’t telling the whole story. In the same time, the population of the Greater Cleveland metropolitan area swelled up from 1.4 million in 1940 to 2.3 million in 1970, before shaving down to a little over 2 million by 2010. Schwarz attributes this to increased sprawl and urban spread. “Even though Cleveland’s population than half of what it was at its peak, the population of the region has remained fairly stable.” Cleveland’s loss of residents isnt necessarily a bad sign — the major problem is simply that the city hasn’t been able to replenish this population.

And that’s led to a very obvious problem: vacancy. Like it’s Detroit brethren, Cleveland and its people have seen swaths of property abandoned and remain unclaimed. The problem is not as bad as it once was, but more than 12,000 buildings still sit empty in the city. That’s 8.8 percent of residential structures. Schwarz says there are probably about 8,000 buildings in a poor or distressed state. The city is still reeling from the effects of the 2008 foreclosure crisis.

So how do you solve a problem like empty buildings? One solution many are contemplating is to simply demolish the damn things and clear the space for reinvestment, and there are mixed opinions about how that effective that approach is.

But starting tearing down everything and starting over isn’t the most cost-effective measure. The goal for many, instead, is to build other forms of infrastructure that can help make blighted neighborhoods more well connected to the rest of the community. The hope is that by giving people better access to to these vacant areas, developers will have a bigger incentive to swoop in, establish businesses, and help bring money into the area once again. As the money goes, so does the people.

As CUDC urban designer Jeff Kruth explains, some of hardest hit neighborhoods are situated on the west side of town. “When the highways came in the 1950s, they served downtown and the west side really well. There was never any sort of roadway that was built on the east side of Cleveland, however. Because you never had that kind off quick access between downtown and the east side, of those neighborhoods were never seen as viable.”

That’s why Ohio is currently building something called the Opportunity Corridor: a five-lane boulevard that will stretch out about three miles and help connect the east side neighborhoods of Cleveland to downtown. The goal of the $331 million is to revitalize some of Cleveland’s most struggling neighborhoods which exist in an area commonly known as the “Forgotten Triangle” — in which poverty rates and vacancy rates both exceed 50 percent.

According to Kruth, the goal is to connect the two biggest job centers in eastern Cleveland — University Circle, which houses Case Western Reserve University along with a slew of art and cultural institutions and museums; and the Cleveland Clinic — to downtown. “It’s not a bad idea to try and connect those things,” he says.

Kruth and others at the CUCD basically signed on as a neutral third-party to try and figure out exactly how the ensure the Opportunity Corridor can generate substantial development. “Our biggest fear is that you’re just going to see the development of what we call lowest common denominator types of development: gas stations, fast food, and the kinds of the things associated with a normal highway the dont really serve the neighborhoods they’re surrounding.”

His team saw the close proximity of 79th Street light rail stop to the proposed highway as an opportunity to bolster public transit close to the corridor and encourage multi-modal networks for traveling and commuting. Instead of allowing the Opportunity Corridor to solely encourage more cars on the road, the city could find a way to implement more walkable spaces, bike lanes, light rail and bus rapid transit routes, etc.

Schwarz emphasizes that vacancy and revitalization projects like the Opportunity Corridor also provide a unique opportunity to test out more experimental forms of infrastructure and design. In particular, she’s interested in finding ways to push green infrastructure as a solution to Cleveland’s problems.

Right now, Cleveland is contending with a century-old sewer system that allows for increased overflow of bacteria and toxicity produced by algal blooms from Lake Erie. Schwarz and Kruth have been trying to figure out how a three-mile road could be fitted with stormwater capture mechanisms that would reduce overflow into the sewer system and keep the city’s water system safer. That captured water could then be slowly released into a natural system later on. “To me, it just seems like a very logical thing to use,” says Schwarz.

Nevertheless, a $331 million dollar project has to help to the city in some sort of way. Despite the unknowns, Kruth and Schwarz are more or less optimistic a project like the Opportunity Corridor and others like it can do wonders to both reduce vacancy in Cleveland and help push the city towards a greener future.

More like this
Gear
November 22, 2022
This mini EV is a portable party machine you probably can’t afford
By Jackson Chen
Gear
November 21, 2022
Hyundai’s Ioniq 6 is an eye-catching EV with a range that might surprise you
By Jackson Chen
Innovation
November 24, 2022
Inside the scientific quest to future-proof corn, America's favorite side dish
By Kurt Kleiner and Knowable Magazine
Related Tags
Share: