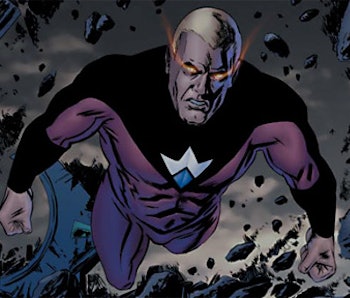 Adam McKay not only won an Oscar for the financial dramedy The Big Short in 2015, he contributed mightily to the re-written screenplay of Marvel’s Ant-Man. Now, the comedy veteran has lined up a superhero film of his own.

Instead of tacking a recognizable hero from either Marvel or DC, McKay has signed on to direct an adaptation of the comic book series Irredeemable from Boom! Studios. Inverse has the rundown of what to expect from all the major players of this story.

Irredeemable is a 2009 comic that focused on an all-powerful hero called the Plutonian. One day, he begins murdering large portions of the planet who defy him. A group of heroes comprised of some of the Plutonian’s old allies form a team called the Paradigm to oppose this new superhero tyrant. Further twisting the traditional superhero story, the Paradigm even enlist the help of an evil supervillain to help them fight their former colleague. Along the way, some of the heroes are killed by the Plutonian, or fall to their own personal demons.

Originally a hero much like Superman, Plutonian has fairly similar powers to the Man of Steel. It isn’t so much that Plutonian becomes a villain, it’s that he begins murdering essentially anyone, regardless of their moral orientation. He is introduced in the books in the middle of killing his partner, Hornet, and his family. After that, he kills civilians, heroes, and villains alike and the reason for his sudden madness drives the first mystery of the series.

A collection of heroes that were allied with Plutonian before his turn, the Paradigm members are in hiding at the start of the series because the Plutonian is actively hunting them down. The team consists of:

A former villain and Plutonian’s rival, he becomes a good guy after seeing Plutonian turn evil. He and his unfortunately named sidekick, Jailbait, make it a mission to fight Plutonian, which sometimes seems them align with the Paradigm. Max Damage is the star of his own comic, Incorruptable which ran and ended the same time as Irredeemable.

Mark Waid is the writer behind the original comic. Waid’s work is often defined by his willingness to play around with a particular character’s individuality in ways that defy previous depictions. This creativity can be seen in his most recent work, writing for Marvel’s Black Widow.

According to Deadline, Hansel and Gretel: Witch Hunters’ Tommy Wirkola will write the adaptation, with McKay assuming directing duties.

Despite being known primarily for his comedy work, McKay is also a talented director who can at least craft imaginative scenes like this bar scene from The Other Guys starring Will Ferrell and Mark Whalberg.