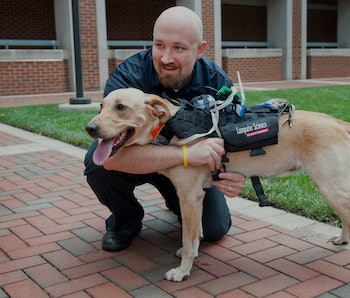 There’s a new Pavlov in town. Researchers at North Carolina State University just published results from their dog-training technology’s inaugural study. The summary: Next time you want to teach an old dog a new trick, you may just need to install a software update.

These researchers used 16 volunteers and their dogs to test out their system. Dogs were equipped with special harnesses that could detect postural changes. When a dog went from standing to sitting, for instance, or vice versa, the harness communicated that state change to a computer. Depending on which behavior the researchers and volunteers were attempting to train into their dogs, the computer would either reward the dog or do nothing. So, if the dog went from standing to sitting, and the goal was to teach the dog to sit on command, the computer would beep, then dispense treats as soon as the harness registered that the dog had sat. If and when it stood back up, the computer did nothing.

Consistency in reward is important for dog training, the researchers say — perhaps even paramount. When a dog demonstrates the correct, desired behavior, trainers must be timely and consistent in offering up their reward. Dedicated, expert dog trainers are very good: It’s not that difficult to determine whether a dog obeyed or disobeyed your command.

This hardware and software system is just about as good – 96-percent accurate when doling out rewards. And it was more consistently responsive: When it did dole out a reward, it did so instantaneously. The faster you give a dog a bone, the more prone that dog will be to learn a new trick. The researchers anticipate that the computerized system will accompany serious dog trainers, yielding unprecedented efficiency. And unprecedented skills:

“In the long term, we’re interested in using this approach to animal-computer interaction to allow dogs to ‘use’ computers,” David Roberts, an assistant professor of computer science at NC State and co-author of a paper on the work, tells the NC State News. “For example, allowing an explosive detection dog to safely and clearly mark when it detects components of a bomb, or allowing diabetic alert dogs to use their physical posture and behaviors to call for help.”

It doesn’t take a great mental leap to acknowledge that these researchers are capitalizing on something that the advertising, entertainment, and social network industries have known for some time. We humans are also technologically conditioned: We use hardware — a camera, say — to capture a sharable snippet of life, then we use software to share that snippet of life. If the shared snippet is good — if it exhibits proper behavior — then we are rewarded with a shower of likes, reactions, and comments. If the shared snippet is garbage, then nothing happens.