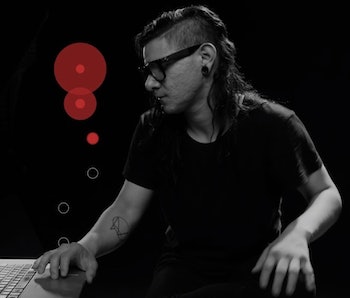 American educators are inadvertently grooming the next wave of beat makers. In April, jazz legend Herbie Hancock, together with the Thelonious Monk Institute of Jazz and U.S. Education Secretary John King, launched Math, Science, and Music, a website-slash-curriculum designed to churn out more well-rounded students by folding arts lessons into core classes focused on math and reading. What they ended up creating was a budding music producer’s dream.

The online apps that make up the site — like kid-friendly recording studios and computer keyboard-driven instruments — turn math and science classes into crash courses on music composition and production. Geometric shapes turn into swinging jazz percussion; lines of code transform sound samples into a thumping four-on-the-floor beat. The next generation of STEM kids — and a fresh wave of curious adults — could turn out to be low-key Skrillexes, Timbalands, and Mike Will Made Its. Here’s a rundown of the program’s three dopest apps.

The Groove Pizza app, fusing geometry with beatmaking, breaks down music into its basic beats the same way you slice up a pie. Designed in collaboration between New York University’s Music Experience Design Lab and the online music recording studio Soundtrap, it’s basically an online music recording studio represented by the simplest possible interface. In this case, a pizza with toppings.

The default Groove Pizza is split into 16 slices, each of which represent one sixteenth note in a 4/4 time signature. Cycling around the pizza’s diameter represents one measure. The pizza is divided further into concentric rings, like targets on a dartboard. The outermost ring of the pizza controls the beat of a kick drum, the middle of the snare drum, and the innermost circles the less frequent, more ornamental beats, like cymbals, bells, and shakers.

As users add and connect beats along the concentric circles, the rhythm’s backbone takes on the form of geometric shapes. The incessant rat-tat-tat of an octagon-shaped snare pattern on a standard pizza, for example, sounds very different from the more trapezoidal, and thus naturally syncopated, rhythms laid on a 12-beat Bembé rhythm pie. It’s a deceptively addictive little app; for such a simple interface, the results are surprisingly sophisticated.

Scratch, a programming language previously launched by MIT for kids to create stories, games, and animations while learning the basics of coding, was repurposed as a music production system for the initiative.

Starting out with virtual instruments known as “Sprites,” users modify basic chunks of code to customize how sounds will play out together. A conga drum, for example, can be programmed to ring high or thump low, speed up, get louder, or stop after 20 seconds. Throw in a similarly customized acoustic guitar strum and electric piano sample, together with the pauses in between, and you’ve got the elements of a basic song. The rest is repetition.

And that’s the basic lesson behind Scratch: There are a lot of ways of looking at music, but for the young, uninitiated composer, it’s helpful to think of it as a series of repeated elements — chords, rhythms, and individual notes — synchronized with others in predictable patterns for specified periods of time. The real fun, of course, comes when those patterns are broken.

The aQWERTYon app, like the Musical Typing feature in Garageband, turns a laptop keyboard into a synth, giving even non-musicians a taste for instrumentation. The program, named for its keyboard’s similarity to the layout of an accordion, may sound goofy, but it actually provides a stellar starter class in musical improvisation.

Users can load up their favorite songs via YouTube and play directly over them; The program automatically picks up on the key signature and scale in the song, laying out musical notes on the QWERTY keyboard that fit, sonically. Suddenly, smashing keys becomes the computer equivalent of unrestrained riffing on an electric guitar. Together with Music Theory for Bedroom Producers, a simplified explainer on which notes fit with certain chords and why, the aQWERTYon equips budding musicians with everything they need to start composing and recording.