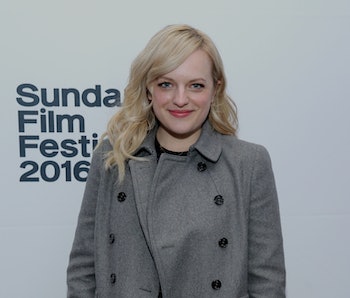 Margaret Atwood’s most famous work, the dystopian masterpiece and eerily relevant The Handmaid’s Tale will continue to be eerily relevant and masterful onscreen. The upcoming adaptation will star Elizabeth Moss, who played powerful woman Peggy in Mad Men and feminist dream cop Robin in Top of the Lake.

Because apparently sometimes, as unlikely as it seems, we can still have nice things. The Handmaid’s Tale will be adapted into a 10-episode drama on Hulu in 2017. The ironically Scientologist star Elizabeth Moss (perhaps this is a move like Katie Holmes in The Giver) will be joined by writer Bruce Miller (The 100) and producers Daniel Wilson (The Handmaid’s Tale film), Fran Sears (The Sophisticated Gents) and Warren Littlefield (Fargo). And lest you fear TV will ruin the project, Atwood will be on board as a consultant.

“A rat in a maze is free to go anywhere, as long as it stays inside the maze.” — Margaret Atwood, The Handmaid’s Tale

As HBO is also developing Atwood’s MaddAddam trilogy, it’s a good time to be an Atwood fan.

Next up, bring on the adaptation of The Heart Goes Last, with the sex robots, Elvis impersonators, murder and mind control in all their glory.