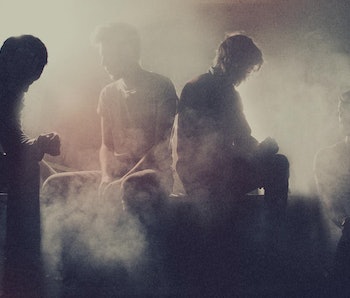 The human experience has changed drastically since Homo sapiens first arose in Africa’s Great Rift Valley somewhere around 150,000 years ago. The addition of some Neanderthal DNA aside, humans have not. But evolutionary inertia can be overcome, and the advent of biohacking and other transhumanist projects may usher in a moment of punctuated equilibrium — unusually rapid and divergent adaptation. This potentiality has prompted many people to wonder about the future of the human species. Will our descendants be something else entirely, a sort of Homo futurus? Depends on how willing you are to ignore Aristotle.

Genus and species are classificatory systems that attempt to organize life into neat, comprehensible particulars. Particular names of species, like Canis lupus, are “natural kind terms,” meaning they allow us to refer to real, physical things: we can point to a wolf in nature and say “Canis lupus.” Wolves exist and they are never leopards. They’re very consistent that way. The abstract idea “species,” on the other hand (as opposed to a particular species at a particular time), is a bit less substantive.

It’s not altogether clear whether species are real. Put another way: The concept of “species” is real only in the sense that it has explanatory power. That means that the idea is fungible. And bulletproof classification systems have long eluded taxonomists. The effort to organize the natural kingdom began with Aristotle, who thought that there were real, identifiable relations throughout nature and wanted to organize them. Aristotle focused on “essences,” claiming that there is something essential about a horse that makes it identifiable as a horse. In a sense, Watson and Crick proved Aristotle half-right, but it’s understandable that philosophers in modern times — post-Darwin — have shied away from the Greek’s neat definition.

Evolution, they argue, shows that nothing can be truly essential to a species: In a hundred-thousand years, that very property (the one once dubbed essential) may no longer be advantageous and may therefore fade away. The idea of a species is therefore not specific to a group of animals, but to a time and place in which those animals exist. But that’s an uneasy explanation too, because it makes the idea of species the ideal of species, which means we’re no longer dealing in natural kind terms.

One way to slice through this Gordian knot, advanced by Cornell University Professor Richard Boyd, attempts to skirt those classificatory ruts. It’s called Homeostatic Property Cluster theory, and, at first glance, it sounds totally wacky. That said, it may be the best way to think about the future or futures of humanity.

Natural kinds, Boyd posits, are HPCs. Let’s imagine a particular natural kind: tiger. Tigers have properties, or specific attributes, such as two eyes, four legs, sharp teeth, and stripes. The species “tiger,” or Panthera tigris, then, has a cluster of properties. This cluster itself is homeostatic, meaning its inner workings tend toward equilibrium, stability. HPCs, however, can develop and change over time. If it becomes advantageous for tigers’ stripes to turn to polka dots, for instance, then the “tiger” HPC will simultaneously evolve until the tigers, and the cluster, regain homeostasis.

There’s a so-called causal mechanism behind this shift. Whereas essentialist views would have a hard time keeping up with evolution, HPC theory can. One property of the concept “species” is a shared ancestry; another property is gene flow, or the ability for members of one species to reproduce. For these polka-dotted tigers to remain true tigers, then, they must have descended from normal, striped tigers and must also be able to breed with those normal tigers. (Other properties apply, too, but these are most important.)

That’s part of the point of HPCs: they are adaptable. They’re clusters, and these clusters have fuzzy edges. Some clusters overlap, like Venn diagrams. And that’s where it becomes difficult to say that the human species can itself evolve or mutate enough to become a new species.

Under the outdated essentialist view, it would have been relatively easy for a new species of human to arise. Let’s say that the human essence is rationality. Then assume, for the sake of argument, that transhumanism prevails, and that it becomes normal for future humans to have computers implanted to augment their ratiocination. No longer do humans need to reason through mathematics (if you put 2 with another 2 you get… 4): instead, our newfound cyborg natures reason for us. Yet some humans resist this change, preferring good old natural rationality. There are now two essentially different species of humans: those who reason independently, and those who do not.

Under the HPC view, though, that same thought experiment yields a slightly different outcome. Assuming that these transhumanists still by-and-large resemble the boring, old, normal humans moping around the planet, and that these transhumanists can still interbreed with these conspecifics, then all that happens is the human HPC expands. Now, artificial rationality is included within the somewhat amorphous human property cluster.

Two remaining thought experiments shed further light on how HPC theory might handle human divergence in the future. First, imagine that humans continue to develop humanoid robots. The more these robots come to resemble humans — looking like humans, speaking like humans, rationalizing like humans, emoting like humans, working like humans — the closer their HPC will come to that of humans. The Venn diagram gets very close to looking like a circle. But even if robots learn to participate in the reproductive process in some way, they will never share a common ancestry with their fleshy partners. The circle is never fully achieved.

Now, imagine that, way in the future, a group of humans takes off to a faraway galaxy. Along the way, their shuttle strays off the chosen course and they wind up on an isolated planet with no way to communicate back. They survive. Generations go by. The vastly different conditions on this faraway planet foster adaptation. Eons later, Earth’s humans rediscover these bizarre humanoid mutants. While they do share the same common ancestry, their phenotypic and genetic properties have deviated. As a result, the two populations are no longer able to reproduce. And, therefore, we must say that — even under the HPC view — this population is no longer Homo sapiens. They share an ancestry, but their properties differ too much.

What HPC allows for that traditional models of taxonomy do not is the inclusion of technology. Robots can be treated as natural kinds. So can computers. In a sense, this view re-contextualizes humanity outside of the biological evolutionary systems. Given that medical and scientific progress have fundamentally altered selective pressure, it’s probably as good a time as any to do that, and to start thinking of adaptation and technological adoption as fundamentally similar processes.

Will the human species splinter or become something new? Aristotle would like to say yes, but the truth is more complicated. When we think of our humanity — that which makes us Homo sapiens — as a collection of traits rather than a single, metaphysical ideal, it becomes possible to consider what we might want to add. Humanity does not simply evolve to survive: it expands.