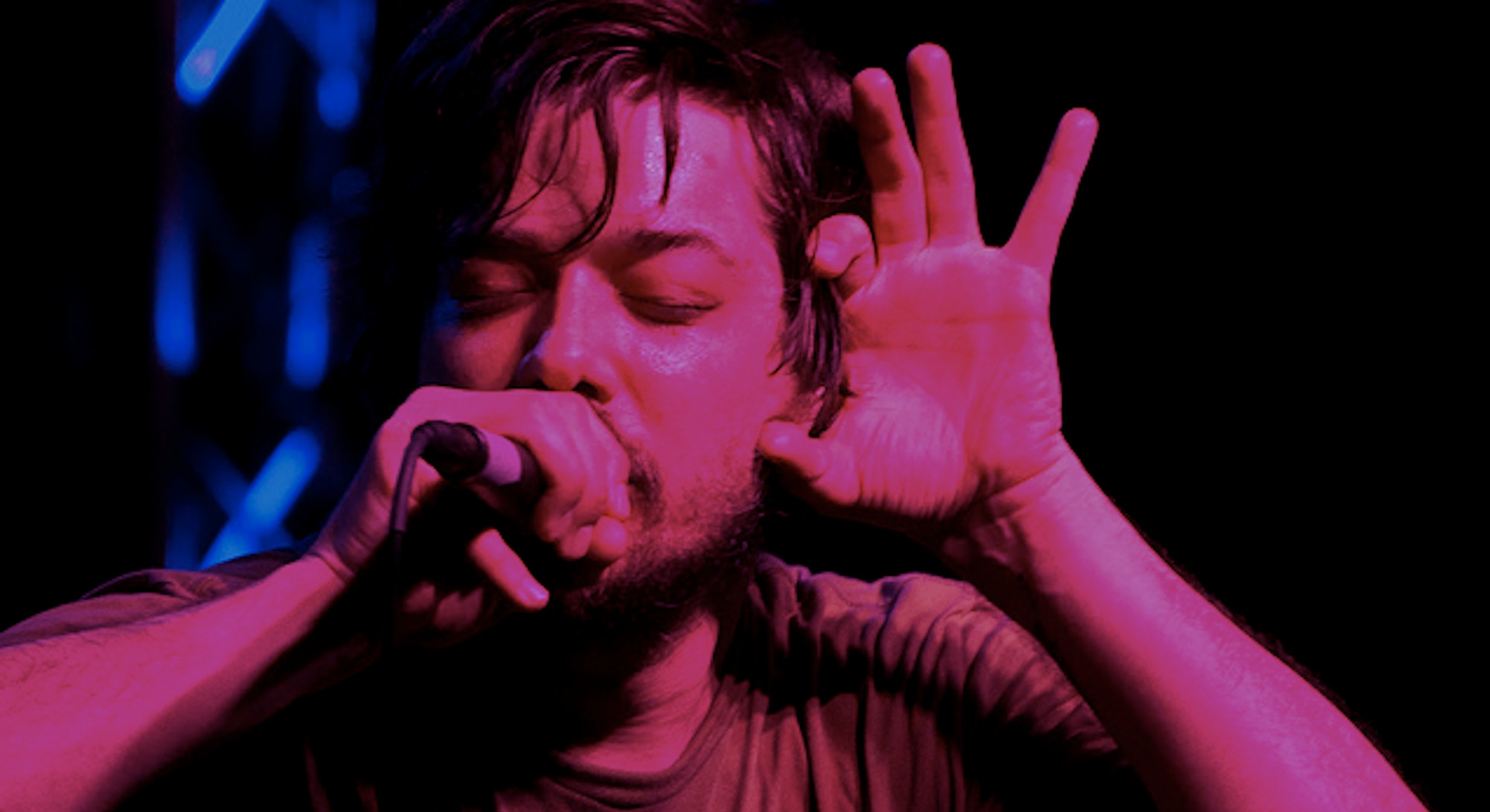 This week, alt-rapper Aesop Rock will release The Impossible Kid, his first studio album since 2012. Aesop, born Ian Matthias Bavitz, is often credited as one of the most important rappers to emerge in the late ‘90s. His first major album, released in 2000, featured verses from Slug, Dose One and Vast Aire. Critics worshipped his unique, sonically complex style, and his fame in alt-rap circles surged, until he suffered a nervous breakdown in 2001.

That same year, Aesop released Labor Days, the album best known for the single Daylight, which broke the rapper into the mainstream. Since 2001, he’s added countless fascinating projects to his discography, including team-ups with The Weathermen, Hail Mary Mallon with Rob Sonic, and collaborations with Kimya Dawson.

With The Impossible Kid, Aesop is experiencing a personal renaissance; the album has been paired with a stunning series of animated shorts, and his press team tells us the artist has been rapping, skateboarding and working as a painter — he was classically trained at Boston University — as he prepares to drop his album.

Watching The Impossible Kid shorts feels like a revelation for those who have followed Aesop’s dark music for decades. Episode 1, which was released online in March, follows Aesop after he wakes up next to a barn and walks briskly through a forest full of cartoonish animals, who all know him as “Aes”. He hurries his way to his psychiatrist, who turns out to be an animated, bespectacled bear named Dr. Izzo. The weirdest part? Aesop is a pretty great actor.

Aesop, who released the video for his first single Rings back in February, spoke to Inverse after sharing the entire Impossible Kid album with us. We discussed re-finding creativity, how to tell a dork from an artist, and how it feels to perform on stage.

I really enjoyed how candid you were in your interview with Open Mike Eagle last year, on the podcast Secret Skin. I suffer from anxiety too. Do you find that your anxiety stops your creative process, or have you been able to use your experience in crafting this new album?

Thank you. Rapping kinda gives me a purpose. I wouldn’t say it’s therapeutic in the sense that when I’m working I instantaneously feel some sense of relief - but when everything else feels like it’s failing around me, I still have a blank page that needs filling. The anxiety stuff can certainly affect my mood and therefore my work - but it’s also always there. As soon as I can climb out of whatever I’m going through, it’s there and ready to be taken advantage of.

Oh man, I dunno. The song should probably say something more like “Life is a fickle mistress, your guess is as good as mine.”

I love your darker stuff — “Holy Smokes” is probably my favorite — but you’ve released some really vulnerable, yer optimistic music. Do you have a song on the new album that speaks most accurately to your worldview?

I mean it’s all in there — and all speaks to my worldview. I kinda feel like people can contradict themselves and still be right and accurate both ways. I’d say in general, I lean toward pessimism. Any songs where “hope” is conveyed probably aren’t very autobiographical. I kinda prefer the darker stuff — that’s just the kind of imagery I gravitate toward. I enjoy music with a little bit of grit to it, so that’s what I try to make. I like to make stuff that sounds like I had no choice - the words and beat had to come out of me.

I assumed “Dorks” was going to be some kind of geek manifesto, but you’re actually using the word to describe “jealous little sycophants”, and artists who all believe they’re geniuses. What’s going on there? If some professed creatives aren’t really making anything worth listening to, what makes art matter to you?

“Dork” is a pretty goofy insult. I feel like if I notice someone is trying way too hard to be noticed as the coolest guy in the room, calling them a “dork” immediately calls it out in a way that only a sillier insult can. It sorta brings the hot air back down to earth. I sometimes meet musicians who are maybe 10% about making music, and 90% about “other”.

They like to be called “musicians” because to some degree it’s seen as cool, but it often feels like at the core it’s not really about actually being creative and doing something worthwhile, It’s more about feeling like they’re at the center of some social moment or cultural phase in a way that cheapens the actual creative side. When I see people gunning for the spotlight in a way that feels gross or dishonest, or just dripping with a mis-guided self-importance, “dork” is the word that comes to mind.

The first verse in “Rings” seems to be about your past as a painter. Does your sensibility as a painter influence you as a rapper, or are they entirely separate parts?

Rings is about feeling some sadness about having let my passion for visual arts somewhat fall by the wayside over the years. I always loved it and still do, but ultimately just wasn’t that good no matter how much I worked at it. At some point my focus shifted more towards music full time, because I was getting some positive reinforcement, and I felt like the path to my goals was more attainable. I’d like to think some of the sensibilities crossover - In general I try to be as visual as I can with the writing, try to keep it cinematic and reference things that really paint a concrete image in my head.

I mean rap can really be anything you make of it. In my early years it was certainly more of a social tool for me, and on the whole rap music always has leaned on the idea of being around a crew, traveling in packs, etc. But I think as I got older I started incorporated my tendencies as a visual artist into my music - meaning that - part of why I loved drawing pictures was because I could shut out the world, and have this one on one relationship with a blank page. I think in a lot of ways my music has grown into that - just kinda me vs the medium, and really seeing what I can do, with less of a focus on the social aspects of the genre.

The video you released for “Rings” is hypnotizing. The animation happens inside your head, and we see you pre- and post-death. How do you feel about performing for the camera, versus performing on tour? Do you find it difficult, or is it just part of the job?

As far as cam v. tour — yea it’s kind of a different beast. When I’m on a camera I sort of have to be aware of what I look like, because we’re making a visual counterpart to the song - so much so that if we have the budget there can be a make-up person or wardrobe assistant making sure my appearance on camera looks as it’s supposed to.

When I’m on stage I am a jumping, sweaty old mess. It’s way more about the feeling, and getting through a set, and doing the best renditions of the songs in that setting. Often I’ll leave stage and catch myself in a mirror backstage and I just look like a psycho - and I’ll think to myself ‘whoa have I looked like this for 90 minutes!”. It kinda doesn’t matter in that scenario. Ultimately it’s all part of the job, and they both have their highs and lows.

It’s rare that a rapper doesn’t talk about sexuality often. Is “Take Me To the Basement” your sexiest song? I think so. How does the subject of sex factor into your music?

I haven’t heard that song in years, but I don’t know that it was really about what you’re saying it’s about. I guess whether or not it’s my “sexiest” song is up for debate. I think I generally avoid some of the topics that have been done to death in rap — drugs, sex, money, violence, etc.

I mean I certainly touch on all of those if they pertain to what I’m speaking on and feel relevant, but I just don’t use those things to completely define me. It’s the same with beats though - you don’t wanna do something you feel has been done to death, so even though you reference things that exist, you try to not be defined by any one idea.