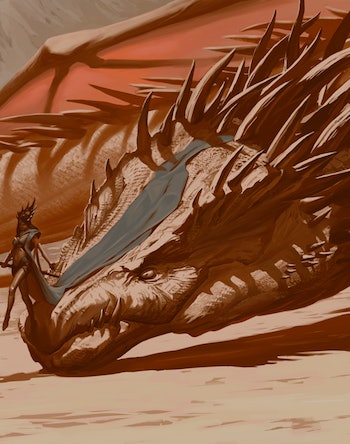 Fantasy artist Johannes Holm is best known for his work on high-profile projects like Assassin’s Creed and Star Wars: Uprising. He’s an illustrator and character designer with an eye for the intimidating. He can take almost any animal and, in short order, make it look like the thing could kick your ass. What’s impressive isn’t the presentation, but rather, the characterization. Every being he renders looks like it has a back story.

Some do. Some don’t. But it feels like maybe they all should. For instance, who wouldn’t want to watch the R-rated version of “Redwall” hinted at by a heavily armored cadre of Sciuridae? Inverse spoke to Holm about his process and his militarized, slightly grotesque, hyper-violent world.

Let’s start with the obvious. Tell me about The Rodents, because it’s my favorite image I’ve seen in weeks. Do these little guys have names and personalities? Are you working with a backstory?

The Rodents is something I am currently developing. It started as a piece of art, but now I’ve written an ever-growing backstory and if all goes well, it will end up becoming my first full novel. The artwork I will collect into an accompanying art book which I plan on publishing separately as a visual guide to the world I plan on exploring.

What’s up with assassin chinchilla, and why does he look so amused? Do you imagine him being ruthless, or is he more of an amicable killer-for-hire, like Rick and Morty’s Krombopulis Michael?

The chinchilla came together when I wanted to do an assassin character. A friend, who happens to own one, suggested it be a chinchilla. The combination was something so brilliant I simply couldn’t resist.

It is a female, and she is a contract assassin who belongs to an old secret clan that only teaches the deadly arts to its few members. She is their most adorable clan member and can bypass any suspicion using the power of her cuteness. But make no mistake, she is also their most skilled assassin.

Your “Mutant Beast” is so goddamn disturbing, and it recalls the puppetry in John Carpenter’s The Thing. How do you envision this kind of thing coming together? What mutated it, and is that existence painful?

It’s funny that you mention The Thing, as that movie is a classic, in my mind. I have watched it countless times and you just dont get that kind of practical monster effects today on the big screen, which is a shame.

For this creature, I imagined a being from another dimension, call it a demon if you will, had entered a human. It finds its own shape within the human body, but the more humans it consumes, the larger and more twisted it grows.

The skeletal system in “Alien Beast Rider” is really interesting. Do you ever think about the inner workings of your monsters, or are you most concerned with how they appear to the viewer? In what kind of world does that rider exist, and why does it submit to the little guy on its back?

I am always aware of the physical workings of my creatures, as I want them to exist in a real world, however alien or horrific they may look. This means, constantly questioning the design in terms of practical appearance.

Why did the creature develop like that? What kind of environment does it live in and what role does this creature play? Predator or prey? For this particular beast I imagined that an alien tribe learned that if they were the first thing the beast saw when it hatched, it would develop a lifelong loyalty towards that creature. So each beast rider had to catch their own egg first and raise the beast to be able to ride and hunt with it. This is a combination of traits we find in real animals.

What are you into, as far as contemporary monster design? Have any films, comics or TV shows really inspired you lately?

Now is probably the most exciting time for someone like me, whose profession it is to design for fantasy and science fiction. We are watching film-quality TV shows like Game of Thrones and complex games have never been as high in quality and as complex in narrative. Easy grounds to find inspiration.

Ultimately, I find the best source for inspiration comes from nature. Creature or monster designs, if they are good, have their base somewhere in reality and nature just never ceases to impress.