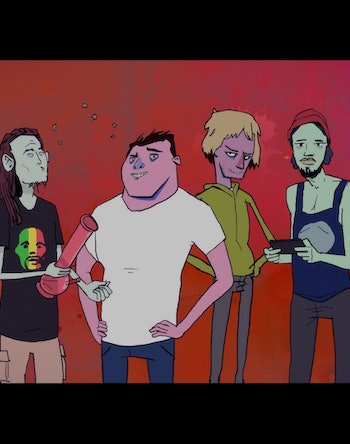 Nerdland director Chris Prynoksi and writer Andrew Kevin Walker definitely don’t have to worry about whether or not their new animated film comes off as anything less than R-rated. Nerdland’s navel-gazing 30-year-old protagonists John (Paul Rudd) and Elliot (Patton Oswalt) are men-children who will do anything ridiculous (or illegal) to become famous, and the film’s drab, dystopian L.A. setting feels strictly designed for adults. There’s also the spectacle of a puckered asshole which pops up twice. All this, of course, is the filmmakers’ “homage” to the dubious dreams of success projected by Hollywood, and a society that is increasingly becoming disconnected from reality.

At NYC’s gorgeous Smyth Hotel, we chatted with Chris and Andrew about their latest film collaboration, the consequences of overstimulation and entertainment, and the truly nerdy subculture that their character The King (Hannibal Buress) embodies.

Chris, what inspired the dystopian L.A. look of L.A of your film? Aesthetically, it seems like you were inspired by comic artists like R. Crumb, as well as your time at Beavis and Butthead.

CP: Yeah, working on Beavis and Butthead was hugely formative. I was really young, right out of school. They gave me a good shot to storyboard and direct on that project. Crumb was a huge influence. But the biggest thing is our studios in Hollywood. It adds authenticity to the film because everybody who worked on it knows Hollywood so well. We really wanted to dig into making it look gritty and real and not idealized.

Andrew, after writing screenplays like ‘Se7en’ and ‘Sleepy Hollow’, how did you adapt in writing for animation?

AKW: I wrote Nerdland originally as live-action, and this was the route by which we did it - both animated and fully independent, and allowed it to be a movie that we’re all super proud of.

CP: I think you can make the characters that much more absurd, and you buy it. It almost feels almost oddly more real as a cartoon than live-action.

AKW: As we went through the script we just had to make sure, “Will this play, animated?” I’m trying to look for a metaphor. Like if I was given the bricks, the beautiful mortar that he [Chris] was putting on between scenes wasn’t on the paper at all, but was what, in my opinion, makes the movie great. Just certain things like the rock n’ roll janitor at the mall. It was a great collaboration. I really feel like it was teamwork, and it wasn’t like “Fuck you, man. Change that!” It was like, tap, tap tap. “Do you mind if I express my opinion about this?” Everybody was very respectful.

Did you feel free to go darker and more sadistic than usual because ‘Nerdland’ is an adult cartoon?

AKW: I think that the darkness was already there on the page. It’s just that it really sprang to life through the expression of Chris’ directing. The script did not change a whole lot. It’s just everything about it, because of the animation and because of how the actors performed it, kind of got elevated.

Chris, you’ve mentioned being shocked when certain themes in ‘Nerdland’, like mass shootings and police brutality, became increasingly relevant. Are there any other prophetic parallels you’ve since become aware of?

CP: Yeah! In this cartoon, it’s a heightened reality. It’s a heightened, ridiculous level of media. But I feel like at this point now, especially with politics, it’s even crazier! Who would have predicted the state we’re in now? It’s nuts.

AKW: You can’t exaggerate the absurdity of the reality.

CP: I had this conversation with Mike Judge about Silicon Valley, where they would write these scenes, and they’d be like okay, they [the characters] have to make an offer for a cartoonishly large amount of money. They’d shoot the scene and then there’d be a real thing, like an app being bought for four billion dollars. So they’d have to rewrite it, because it wasn’t ridiculous enough.

I noticed nods to other dystopian films in Nerdland, like that Clockwork Orange-ish scene where John and Elliot force themselves to watch The King’s ultraviolent video tape. Afterwards, their brains are fried and they seem ready to kill to become famous. Do you worry about kids not being able to distinguish between reality and fantasy anymore?

AKW: It’s just going to happen, right? I’m not worried about it.

CP: I definitely worry about the effects of non-stop stimulation from a very, very young age, but I don’t have kids.

AKW: Here’s what’s interesting to me. There’s people in this room, myself included, who could easily sit for six or seven hours playing video games and beyond. Like, just let me urinate into this soda bottle and keep playing. A lot of that stuff’s in the visuals. It’ll be interesting at how people will be able to cope with looking up past a foot in front of their own face, whether something like that becomes obsolete.

I definitely identified with the film. It’s becoming harder and harder just to leave the entertainment hub of your room.

CP: Why would you?

AWK: That’s the beauty of avatars. I know my way around certain cities in Grand Theft Auto much better than I do around Los Angeles or New York. I could take you easily through San Andreas, but I couldn’t tell you how to get back to Chipotle over here. Unfortunately, I’m proud of that.

In the film, Elliot claims that “30 is the new 12”. Were you hoping that ‘Nerdland’ would help a whole generation of Millennials grow up?

AKW: I would hope almost the opposite. I would hope that stuff like that would give somebody who’s feeling like “I can’t be a screenwriter or a novelist,” if they like they’ve passed their prime - no! As negative as some of the stuff in this movie may seem, it’s all about “go dream your dream, dreamer.” But within boundaries.

John and Elliot are old enough to exercise free will, but but they’re also living in this insanely narcissictic culture that is perpetuated by Hollywood. Who’s to blame?

CP: The way I see it is Hollywood and our society kind of sucks because everyone is obsessed with fame for fame’s sake, including our main characters, who feel like they have something to offer, but they really don’t [laughs].

AKW: But even if they do have something to offer, they’re going about it obviously in the wrong way. That certain kind of sweaty-palmed desperation is certainly something I never want to forget. I wrote Se7en when I worked at Tower Records at 66th and Broadway [in New York]. There’s just different ways to deal with that. It’s kind of like the thing in the movie where every time it seems like John and Elliot might learn a lesson and take one step up the maturity ladder, they get distracted away by something else. But if you did like them at all it’s a relief, because that’s very important.

Well, part of the reason I like them is because they’re just trying to survive in a society where you are constantly forced to market yourself.

CP: Absolutely. It is almost a race. You have to keep up with the next person. “I’m not tweeting enough, Instagramming enough. The hurdles are coming faster. I’ve gotta jump, jump, jump.”

AKW: I treat Twitter like a job. It always amazes me when I find people who do that because they enjoy doing it. That’s weird.

CP: It’s hard to find the balance. I think it’s really interesting right now with the way you can immerse yourself in an unreality that seems real. I did an interview last weekend with a guy who said that he lives 95% of his life in virtual reality. He said, “I hardly ever come out and go into the meat world.” I was like holy shit, that’s crazy, but that’s what’s going to happen. He wasn’t even like, I’m a weirdo. He was just stating that it’s a thing now.

Can you guys talk a bit about how you came up with Hannibal Burgess’’s character, The King?

CP: You know, the Simpsons did such a good job with that “comic book guy” character.

AKW: We didn’t want to feel like we were copying.

CP: One of the greatest moments of my life was sitting in LA listening to Hannibal reading his lines in New York. Hearing him crack up reading from the script.

Is The King based on someone you know?

AKW: I collect original comic book art. And if you go to Comic Con you’ll bump into a few Kings. The other idea I really like is someone who goes, “Where can I get the Paul Lind Halloween special that had Kiss appear?” Or people who seek out Faces of Death videos. So I love that The King traffics in comic books, graphic novels, rare videos. The fringe VHS element of the world that’s still out there, the analogue content that you can still find sometimes - the King’s in that world.