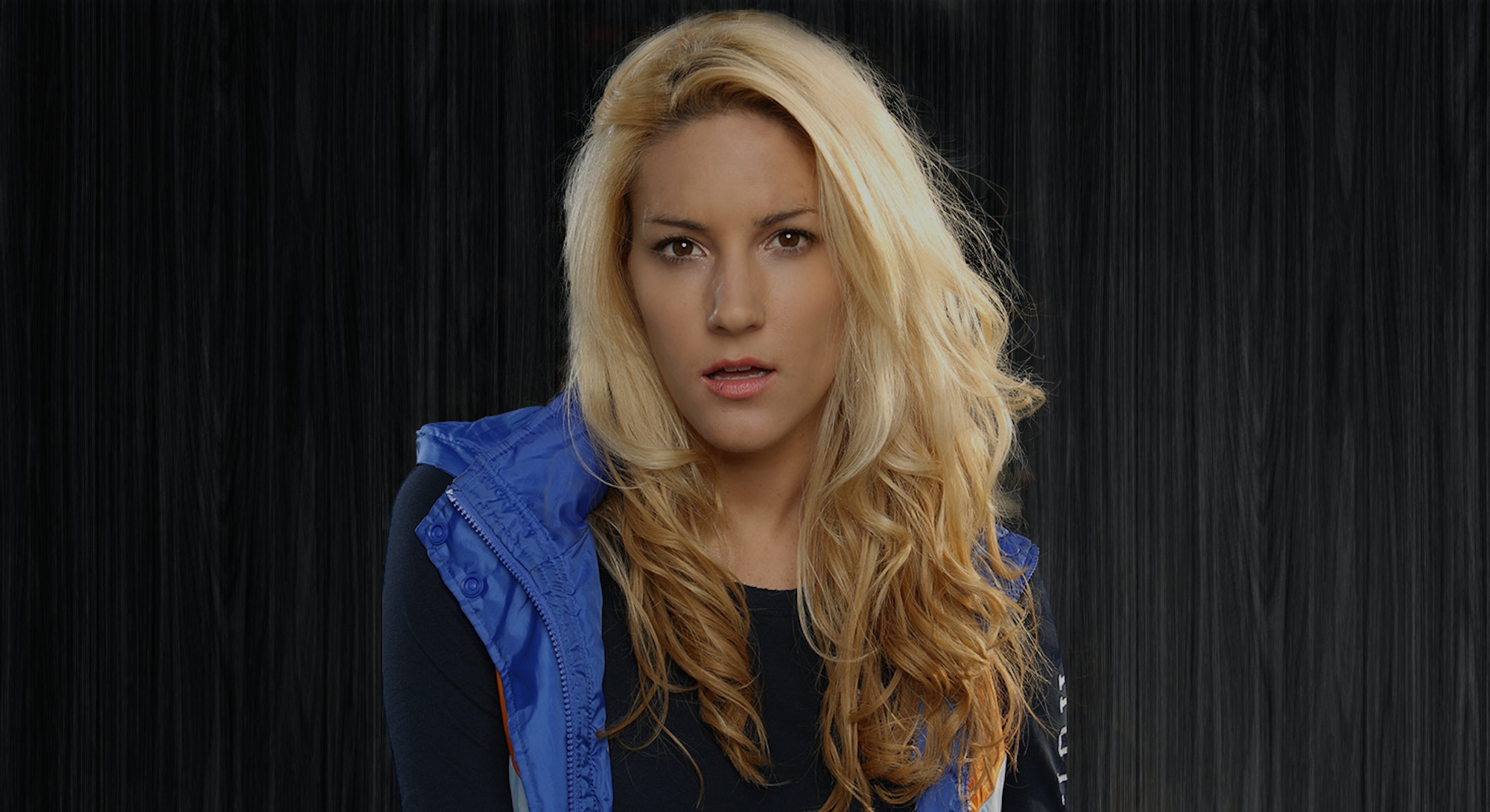 Adrienne Airhart is an L.A.-based comedian who is maybe a little too obsessed with donuts. She runs a pot-shop feminist comedy show and is engaged to a vaping superhero — all while constantly battling online to vanquish joke theft. We asked her about her favorite TV show from her childhood and the conversation went off the rails pretty quickly.

Adrienne, tell me about the TV show you grew up on.

Welp. I had one of those hippie moms who didn’t quite pick herbs from the garden and make pesto out of poisonous nettles (my aunt does that, though) but she refused to let us be sucked in by the salacious world of television. I am in my 30s and I have never had television in my home.

Did we own a television? Sure. But we didn’t have cable. People will still say to me, “No no, the show I’m talking about was on basic cable. You saw it.” And I’ll have to say, “No no, the cord that goes from the wall where the magic is to the back of the TV? We didn’t own that cord.” And then they get it. We were allowed to watch two VHS movies a week: one on Friday night and one on Saturday night. Weekend days were for being outside (I was raised in SoCal so that was feasible, but even after we moved to snowy Portland those rules remained.)

After school on Fridays, we would walk to the movie store together and pick out one movie each (my brother and I): he always picked either Michael Jackson’s Moonwalker or something for which he wasn’t QUITE mature enough but my mom allowed it because she hated how bored he was. I chose The Red Shoes (a movie about a girl who is cursed to dance forever until she dies, creepy) or musicals. Singing’ in the Rain was my fave.

I got to see little bits of shows at friends’ houses, but my mom always knew because I’d come home asking for Gushers or light up sneakers or whatever all the commercials were pumping into me.

My mom was totally right to keep me away from eating my afternoon with tv. I credit that tactic to my ability to window shop and research stuff before I buy it without being coerced by cool kids in commercials. But when I’m in a sports bar with a shitload of TVs playing I definitely feel like one of those mormon child brides who escaped the church and steps out, blinking into the sunlight, so confused by the world.

The most common phrase I have ever said in my life (besides “Ayy pass that blunt”) is “I’m sorry, I don’t understand the reference.” Because if you’re quoting a TV show from before 2012 I’m not going to know about it.

You also thought Friends was an animated show, yes? Does that… is that… have you recovered from being brought up that way?

I wasn’t cool in high school anyway, so it wasn’t a surprise when at the lunch table in my junior year a girl was talking about Phoebe and I was like, “Oh is she the one that uses a sword and not the ax?” and every girl at the table just blinked at me like I was a moron. I think I thought it was Sailor Moon-esque and that they were a bunch of comedic superheroes dubbed over in English.

In retrospect, what show do you wish you’d had as a kid? Might something have changed you — now that you know these shows?

The only thing I really think I missed out on was SNL and stand up comedy on late night. I did not even know what stand up comedy was until I was about 23. My life was flooded with ballet classes and homework for all my fucking AP’s and honors classes and having to care for my much younger sister while my single mother traveled a lot. I missed out on a lot but I wouldn’t trade any of that shit for the world. I read a ton of books instead of watching tv and I think that’s why I’m able to hold a conversation so well despite being a crazy person.

I knew a lot of characters from SNL because my mom would imitate them to me (she grew up with TV), but I’ve had to go back and watch a bunch just to feel like I can hang in a conversation. I’d say, “Ma-king COPIES” but really I had no idea why I was saying it. I do feel like my comedy is more genuine to me because I am not influenced by anyone, but I might have had better joke structure earlier on in my career if I fucking knew what that was.

You run a comedy show out of a marijuana dispensary. Tell me about how that show came to be, and does pot influence your enjoyment of TV?

I’ve been trying to establish myself as a cannabis professional/comedian for years now. Since before we even moved to LA. I was arrested for marijuana possession back in Florida before I started to doing comedy and it actually led to me having to defer my acceptance to grad school in Seattle and stay in Florida longer. So, I started doing comedy.

Eventually when we’d moved to LA and lived here for a while I decided I wanted to know about the pot industry from the ground up (or, like, the middle ground. I don’t have a green thumb!) so I started working at a wonderful, mostly-female-staffed, super legal dispensary called The Higher Path in Sherman Oaks.

I maintain a very close relationship with the owner and higher staff to do my show there monthly and keep promoting them in any way I can. Their mentality of keeping weed professional, safe and sharing the education about it is exactly the way I want to continue in the cannabis industry.

How’d you get into comedy?

I was at a comedy club picking up a friend who had been trying to coerce me into trying stand up (again, I had no idea what it was) and I saw my future husband Aristotle on stage, hit on him, and went on a date with him at the same club 2 days later to watch the roast of Los Angeles’ darling Wendi Starling.

Aforementioned arrest happened that night and Aristotle and I kept dating since I wasn’t leaving for grad school anymore. I’d hang out with him late at night after work (I was managing a kosher yogurt shop while I got my second degree in computer science) and after a few months he and his friends were like, “You should really give this a go.” And I did. And it felt so natural because I have no stage fright since I was a dancer my whole life. A year and a half later we moved to LA and the rest is history. Stand up is my life now!

You make a pretty kick-ass webseries. Is the format of that something you had to learn, without TV in your background?

I thought about doing a web series for a long time but was so scared that it would suck because I was such a noob about all things comedy and film related. I did spend most of my life on stage dancing and singing in musicals but it’s so different on film. I was tripping on ayahuasca in the desert in 2014 and when I woke up out of my trance I was like, “I have to do a series.”

I approached my friend Delanie Fischer (who was and is my roommate) and asked if she wanted to do it with me. “Make our own content and be in charge of how it goes out? YES!” she cried. The name came because when we were drunk one night and she told me she always forgets she’s taller than me and I said, Yeah man, we’re two inches apart.” We stared at each other and knew that would be the name of our series.

I’d be remiss to not bring up the constant risk you suffer — of having jokes stolen on social media by the FatJews and FuckJerrys of this world. What is it like to find out people are stealing your ideas? What can we do about this?

You’d think I’d be flattered, right? I guess deep down I am. These assholes think my content is “curatable” and their fans are always super interactive with whichever jokes of mine they stole, which feels nice. Usually a friend or fan will alert me to the theft and I’ll contact the account in a way that gives them a chance to do the right thing: tag me. They don’t have to delete! I want my material out there, that’s why I tweeted it!

But think of how many more followers I’d have if they’d just fucking tagged me. The last one that happened? Someone messaged me that they’d told her it was stolen, she blocked them, and then I posted my original tweet and tagged her. I gave her 12 hours to do the right thing and then in the morning I posted about it on Facebook and Twitter. The reaction was IMMENSE.

I’m so lucky to have such loyal friends and followers. She blocked a bunch of them, deleted the post and never contacted me or gave me credit. I hope this ends one day, but these dramatic calls-to-action that I, and other comedians, do are going to lead to a revolution in joke crediting. I’m sure of it. Team work is the dream work!