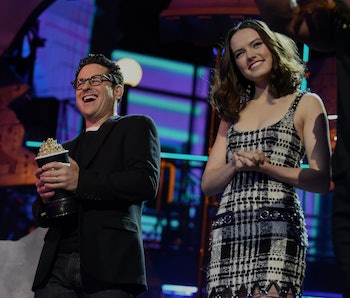 At the Tribeca Film Festival it J.J. Abrams appeared to drop one of the biggest bombshells about the new Star Wars series since he finished his directorial duties on The Force Awakens.

One of the most discussed mysteries of Episode VII is the identity of Rey’s parents. It’s generally been speculated that the female protagonist’s parents are either Han and Leia, or Luke.

But during a Q&A with the Star Wars director and Chris Rock, a young fan named Kyle straight up asked the question on everyone’s mind — “Who are Rey’s parents?”

Abrams laughed, and nervously responded: “Rey’s parents are not in Episode VII, so I can’t possibly, in this moment tell you who they are. But I will say that it is, this is all I would say — it is something that Rey thinks about, too.”

The response drew laughter from the crowd but a flurry of questions on social media because a literal interpretation of this statement means Rey is neither a Skywalker nor a Solo.

However, in a comment to EW Abrams explained what he was trying to say.

“What I meant was that she doesn’t discover them in Episode VII,” Abrams said. ���Not that they may not already be in her world.”

But some fans seemed unpersuaded, saying that Abrams is just backtracking after his misstep. Plus, fans are weary of any statements from the director after he swore up and down that Khan wasn’t in Star Trek Into Darkness.

So what do we substantially learn from this whole incident? Probably not much —other than Abrams is getting pretty tired of walking on eggshells every time he talks Star Wars. But that’s what he signed up for, and he’ll likely have to deal with it for the rest of his life.

This week we did at least learn why C-3PO’s arm is red. Unfortunately, the next Star Wars film Rogue One probably won’t answer any burning questions, either. Sorry, Kyle.