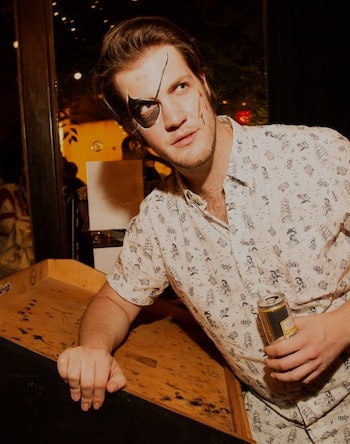 I once saw Eli Yudin pay cash for every single bottle of Redd’s Apple Ale in a bar. Only in this moment did I know that I’d found a soulmate. Yudin is a painfully funny comedian who is way too young to be as good as he is. Also, he knows how to slam a dozen Redd’s Apple Ale in one sitting and still obliterate some Smashing Pumpkins karaoke, so he’s headed for fame and fortune. We sat down with him to discuss his favorite childhood TV show Tintin, and all of the emotional weight that comes with watching French animation.

How did you get started in comedy?

I started comedy in college, while I was in art school at the University of Michigan. There’s a fantastic comedy club in Ann Arbor called the Ann Arbor Comedy Showcase, and every Wednesday is their open mic, the “Comedy Jamm.”

The club is closed Sunday through Tuesday, so I ended up calling about 2 hours before showtime, to which I got a “Yeah, you’re on.” I then grabbed my roommate Penn and informed him that I had to do 3-4 tequila shots immediately, to which he kindly acquiesced. That was the first time I ever went up on stage.

I didn’t eat shit, luckily, though that seems to be the first show story for many. Unfortunately, that first time on stage was a detriment to my art studies, as it sort of flipped a switch for me that this was what I’d always wanted to do. I think almost any genuine stand-up I’ve talked to has had that moment where everything else kind of fuzzes out once you realize this is it. Also, real careers kinda go out the window. Sorry mom & dad. (Though, I was in art school, so it wasn’t like I was throwing an MBA in the trash.)

I asked for any show in the world and you pulled Tintin, which I missed out on completely as a kid. How’d you find it and why did it matter?

Well, I have the memory of a bar of soap, so I couldn’t remember exactly my FAVORITE show. I ended up asking my mom what she remembered me being most obsessed with. Between her answers of TMNT, Tintin, and The Simpsons, I figured that would be the most interesting. (A comedian who likes The Simpsons? I can’t click FAST enough!)

I didn’t start with the TV shows, I started with the comics by Hergé. I have a hunch my first exposure to it was likely thanks to my Aunt Ellie. She also turned me on to Asterix the Gaul, another french comic that I was obsessed with. I remember playing a cripplingly difficult Sega Genesis Asterix game that I definitely would have quickly given up on had it not involved Asterix.

I think I was mostly drawn to the pure adventure of it. The stories are very old-school explorer-type plots and settings, very Indiana Jones-y. Lots of temples, tombs, mysticism, putting an earnest character into a mysterious situation.

I kind of miss that nowadays. You can only watch so many existentially tortured men quip their way through big city life before you’re like “Yeah, seems tough, but I’m pretty sure I want to see someone fight a mummy.”

Do you still like it now? Has your appreciation changed?

I watched a bit for this interview, and it does still hold attention, though it does feel a little slow-paced compared to the sort of action-heavy cartoon you might watch these days.

The stories themselves are incredibly detailed, even now. I re-watched the “Cigars of the Pharaoh” episode, and within its 44 minutes, Tintin & other characters enter a pharaohs tomb, are kidnapped, rescued by a gunrunner, crash a plane into a jungle, and are institutionalized in an asylum after being driven mad by poison. So they’re certainly not boring.

To be honest, though, Tintin himself is pretty fucking boring. He’s a reporter, which is pretty much just an excuse for him to snoop, but a very middle-of-the-line, courageous but fairly bland character. He might as well be just a shadowy outline with the word hero” written inside it. The comic relief and the fun comes from the supporting characters. Even his dog Snowy is way cooler than him.

The ones that immediately come to mind are “The Cigars of the Pharaoh”, “Tintin and the Picaros”, and one I can’t find but involves aboriginal dreamtime and a large opal.

As for characters, Captain Haddock is an obvious favorite. He’s an alcoholic sea captain who serves as the foil to Tintin’s gung-ho “let’s go save the world!” attitude. He also has some of the most fantastic insults of all time, which is apparently accredited to Hergé trying to stay true to the “mouth like a sailor” trope while not being able to curse due to the young people who read the comics.

Thompson and Thomson are also beloved, as identical-looking police officers only discernible by the shape of their mustache. They speak in a lot of Spoonerisms and generally bumble around and provide comic relief.

Did you pick a foreign TV show to prove that even as a child you thought you were better than everyone else?

Yes. I would often read it cross-legged on the playground and smoke thin french capris, leering at the kickball court.

Did Tintin inform your comedy at all? Did any show from your childhood influence you as a comedian?

I would have never thought it did, but in retrospect I can see places where it bleeds in. Not as much in my stand-up, but in my sketch writing there are places I can recognize some influence. I love thought-out and unique secondary characters, and a heavy amount of my sketches and scripts I’ve written are in the not-quite-everyday realm. Lots of werewolves, demon possession, cursed rubies. As for other shows, they recently put Animaniacs on Netflix and I’m realizing how much I owe to that sort of gleefully stupid madcap sort of comedy as well.

Finally, I wanted to personally congratulate you on the $10k you raised in a Kickstarter for House of Farts. Tell me how this massive artistic undertaking came about. To you achieve your vision?

At first, I’ll admit, donations were slow. But luckily, I was walking by a swamp when I saw a giant crocodile with Warren Buffett in its jaws. I gave that alligator a swift kick to the eye and he freed Warren, who, in return, promised to fund any Kickstarter I ever created. God really does provide! (See, without even meaning to, that was a very Tintin-esque reasoning.)

Catch Eli’s calendar on his site and follow him on Twitter for more dangerous nonsense and Redd’s Apple Ale non-sponsorship.