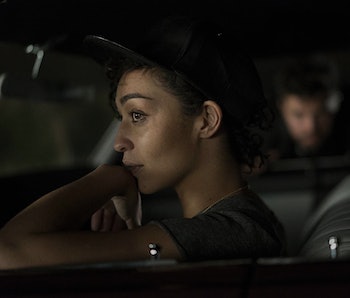 A few days ago, AMC’s official Twitter account for its upcoming TV adaptation of Garth Ennis’s seminal comic series Preacher, revealed the first good look at Tulip, one of the series’ three major characters. The clip is entirely free of dialogue, but watching it, you’d be hard-pressed not to get a solid feel for Tulip’s character.

Since the studio is keeping the general plot under wraps (as much as it’s possible to keep secret the plot of a 20-year-old comic series, anyway), there’s not a lot of context to this scene beyond its visceral appeal. However, this brief glimpse at one of the series’ most important characters does provide some pretty exciting clues about the content of AMC’s newest show.

First Off, Who Is Ruth Negga?

If you’ve been watching S.H.I.E.L.D. as regularly as you should have been, you’ll immediately recognize Ruth Negga as Raina, the intermittent bad girl from the first three seasons. She began as a sultry, yet mysterious vixen and ended things as a fortune-telling porcupine. It was a long, sad ride for Raina.

But the show demanded that Negga adapt her character to meet the needs of the evolving plot, and she always rose to the challenge with great aplomb, making her one of the more interesting and complexly portrayed characters on the show.

Of course, Negga’s career hasn’t been limited to Marvel properties; she’s been giving great performances for years in a variety of roles. Unfortunately, she’s had the routine misfortune of shining in films that are mostly ignored. Remember her stirring turn in Andre 3000’s Jimi Hendrix biopic? No? Or how about her simply amazing performance as a vulnerable, yet manipulative heroin addict in Samuel L. Jackson’s The Samaritan? (Honestly, she kills it, but the rest of the movie is just mediocre.)

Once you’re familiar with her work, Ruth Negga is an actresses whose lack of fame boggles the mind. Every time she appears on screen, she’s so dialed into her character that it’s hard to take your eyes off of her. She really is an immense talent and a pitch-perfect cast as Preacher’s female lead, Tulip.

Okay, What’s So Great About Tulip?

To hear AMC tell it, “Preacher is the story of Jesse Custer (Dominic Cooper), a conflicted preacher in a small Texas town who is inhabited by a mysterious entity that allows him to develop a highly unconventional power. Jesse embarks on a journey to, literally, find God, joined by his ex-girlfriend Tulip (Ruth Negga) and an Irish vagabond named Cassidy (Joseph Gilgun).”

Obviously, that’s a glancing overview as it makes zero mention of the nefarious Christian cult that’s out to murder Jesse’s face off, nor does it mention the oddly integral young man who tried (and failed) to blow his face off the day Kurt Cobain died. What it also fails to mention is that Tulip was about to be a hitman for the mob when she runs into Jesse.

In other words, she’s one tough chick who’s not afraid to blow someone’s face off when the need calls for it. Tulip routinely steps in as Jesse’s muscle (when she’s not saving his ass to begin with) and — in the comics — she’s more than capable of holding her own against Jesse’s machismo and Cassidy’s douchebaggery.

More Than Just a Girlfriend

For anyone who’s spent time with the Preacher comics, it’ll be no surprise to learn that the love story between Jesse and Tulip is extremely pivotal to the series. These two characters already have a decade-plus of tumultuous shared history when they run into each other in the comics. From there, the relationship is a rollercoaster ride of wild emotions and shifting alliances.

For those concerned that Tulip will be reduced to a stereotype, Negga promised ComicBookResources that Tulip would remain as strong a character on the small screen as she was in the comics. The actress explained that not even the love story was straightforward:

“I think it’s a power balance, really, in the relationship. How it shifts and how they — basically, they grew up together and they’re so intertwined and it’s not just a straightforward girl trying to get her boy back. It’s a lot more complicated. He’s her life. It’s not just like a boy-girl thing, he’s her stability. He’s her anchor. I think that’s sort of bigger than the whole kind of boyfriend girlfriend thing.”

While AMC has assembled a pretty talented cast to take on Garth Ennis’ controversial comic, but Ruth Negga may just end up being the most talked about member of the cast. Her character in the comics is a fluid mixture of aggression and vulnerability, a part that Ruth Negga is more than equipped to play.

We don’t have much longer to wait; Preacher is set to premiere on AMC on May 22.