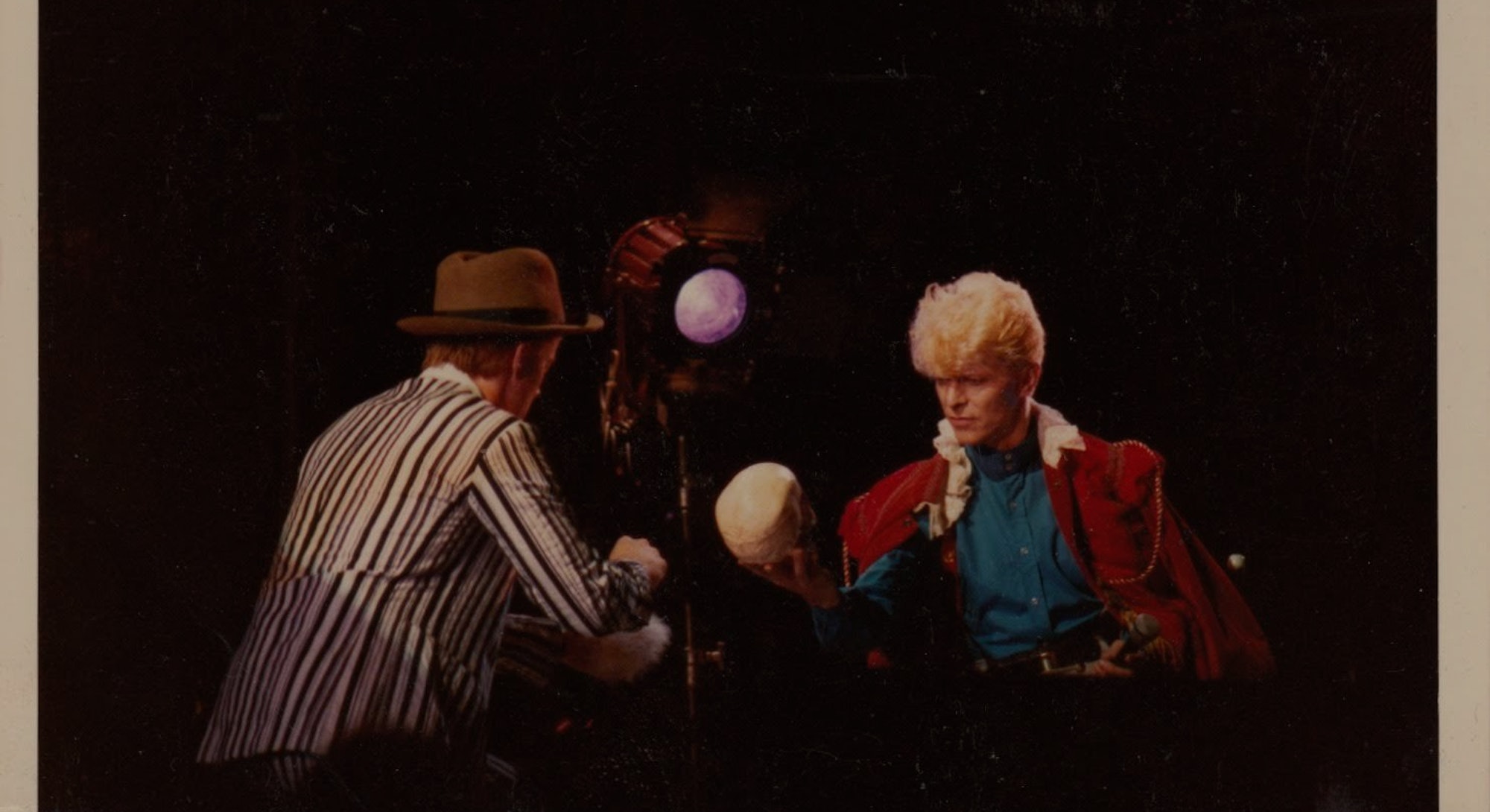 Frank Simms was a young musician when he first crossed paths with David Bowie.

“While we were still recording in the studio with David, as we were leaving the last day he said, ‘Oh, Frank. Can I have your phone number?’ Simms tells Inverse. “And I’m dying. I can’t believe David Bowie is asking for my phone number!”

Simms was doing backup vocals on Bowie’s “Let’s Dance” that day and soon after, Bowie made use of that phone number.

“Within two weeks his manager called and said, ‘David Bowie wants you to be on tour with him.’”

Simms accompanied Bowie on the “Serious Moonlight” tour in 1983 — and since then, Simms has done studio work with the likes of Billy Joel, Madonna, INXS, Carly Simon, Elvis Costello, Brian Wilson, Cyndi Lauper, and more.

Simms naturally has a few stories up his sleeve, and he sat down with Inverse to tell them.

How did you first become connected with David Bowie?

After college, I started a band and we drove to New York to play in clubs. There were three of us: me, my brother [George Simms] and this other guy David Spinner. We would play everywhere: Catch A Rising Star, Renos Sweeney’s, Tramps. Then we got a bigger band and started playing locally in Stamford [Connecticut]. Somebody heard us and said, “You guys are great!” So he talked to a guy at Elektra Records.

One of the guys in the band introduced us to Nile Rodgers. Whenever he was producing something, he’d say, “Come on in and sing for this guy’s record.” That was how we met David. We sang with David on “Let’s Dance” and then it, of course, became a huge hit.

Everyday was something different. In Australia, he would say, “I rented a yacht so we’re just going to Sydney harbor and we’ll set the anchor. Go swimming if you want!” And the Australian promoter would hire these Australian models. We’d sit and talk with them — some of the girls from The Road Warrior were there, so we were asking them, “What was it like making a movie?”

With most of the places we went, there were such incredible extras provided along with the event. In New Zealand, the Maoris heard we were coming so they had a gigantic ceremony and a feast to welcome David and our band. The night before we went to the ceremony, David asked me, “Could you come up to my room? I heard they’re going to sing us a song, so I want to write something to sing back to them.”

Or sometimes we’d get onto the plane and they’d say “David has invited five sushi chefs,” so we ate an entire sushi buffet the minute we walked on the plane. We always stayed in five-star hotels, and private planes. And we saw tons and tons of stars. Everyone from Iggy Pop to Paul Simon to Susan Sarandon appeared.

What surprised you the most about Bowie?

He had a great sense of humor. He was very accessible. Even the first couple of days recording for him — he wrote a song called “Cat People.”

We called it “Cat Urine” or “Cat Feces” and he would laugh. Usually if you did that in front of other rock stars, they say, “Get out of here, you’re making fun of my song.”

He appreciated the fact that we didn’t worship him. You can only imagine how many people were like, “Oh David, oh David!”

We were in West Berlin, and we’re driving down the street in a taxi, and there’s David, alone, his cap on, walking down the street. He didn’t care. He had this feeling like, “nobody is going to mess with me, and if they do, I’ll talk to them.” He didn’t want to observe life while riding in a limousine.

One crew member said to me one day, “You know what David Bowie did? He rolled my pant leg up because my pant legs were dragging. He got down on the ground and rolled them up.” Who would do that? Nobody would do that!

Since you’ve been on tour with so many artists, what set Bowie apart aside from his personality?

That concert was highly choreographed. It was the first time computers controlled the lights and made them change colors with different formats. And the costumes! David Bowie worked with a guy named Peter Hall from the Metropolitan Opera and told him, “I want the sax player to look like that, the drummer like that, George and Frank like this.” Everybody had his own incredible, unique costume, from all over the world. My brother looked like an English nobleman, I looked like a pimp, and someone else would have a complete Navy jacket. David’s idea was he wanted to envision a dock in Singapore in the 1950s.

When we opened in Belgium, they put flowers in the dressing room and David stuck a note in them. It said, “Boys, please don’t stain the costumes. Love, DB.” I saved it.

With the costumes and lighting and choreography — nobody had attempted anything like that. It was like an opera or a ballet. We had four gigantic lit columns that looked like huge 40 foot shower enclosures. David actually stood in one, lit, while he sang “Ashes to Ashes.”

David’s philosophy was, “if I chose an active framework with I have nine or ten people contributing to this opera — this incredible production — people are going to say, ‘Look at what the sax player is doing, look at how the guitarist solos, look at how the two singers interact with David on stage!’” He knew that the entire show would look better if he incorporated as many strong performances as he could.

You mentioned before how opulent everyone was. How did you prevent that from getting to you?

When you’re a regular person suddenly vaulted to this position, and you’re seeing the effect you have and when you’re on stage in front of 60,000 people — you could almost wave your hand and everyone would reach out to you as though you had mystical powers.

That did take a while to come down off of. Because when I got home to Connecticut, regular old Frank going to buy some milk, I would think “I can’t believe I’m having to buy my own milk, carry my own bag, and drive my own car!” You miss that adoration. It takes a really strong person, and it develops over many years.

David saw bad times and really big times, but you’d never see him turn his nose up. Now, I would see that as a performance. If we were doing press or something, I would see his walk-in with that air, but he would never do that to us or anybody in the crew.

Do you think you got the better end of the draw, in the sense that you experienced the spotlight of fame but you’re still able to buy milk without being swarmed by fans?

Yeah. It’s funny I’m sure if I walked on the street in New York there are people who say, “I recognize him from such and such.” And yet, they don’t ever make a big deal about it. The big thing is celebrities don’t know who their friends are. Billy Joel didn’t know who his friends were. You could sense that he retreated from the public. So he would sometimes get people to work with him he had known in high school because he figured, “They don’t worship me.” So I think I did get the better of the deal that way.

Did you see Bowie in his final months or days?

I saw him at a birthday party about a year ago when he probably did have cancer. He looked magnificent. Unbelievable! His eyes, his skin, his hair were just perfect. I couldn’t believe it. I said “David, you look marvelous. He said, “Well, after all, the way you look is so important, isn’t it. That’s what really matters.”

And of course he was just joking, but you watch him walk through the room and people shudder in a good way, like he’s just sending out vibrations. Not many people can do that.

With David, it was always the peak. Now, he wasn’t always commercially successful but you see this stuff and go, “Oh my God.” Even before he died, I’m looking at stuff from the last album and looking at videos and thinking I can’t believe you’re doing this!

This interview focused on David Bowie. For more on Simms and his career, including his experience as Madonna’s “Material Girl” robot, read our Frank Simms “Jobs Hacks” interview.