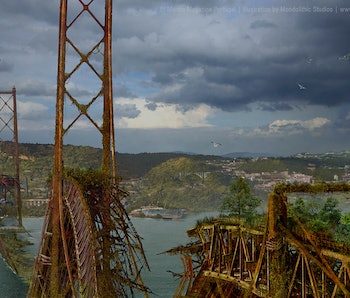 They will know us by the trail of our dead: Humans have spent roughly 60,000 years causing mass extinctions and we’re only getting better at it. Though the environmental movement is as big as it’s ever been, human ecological destruction has become compulsive to the point that it’s taken as almost a given that the Anthropocene will necessitate the terraformation of Mars. But not everyone is ready to give up on this planet. Les Knight, leader of the Voluntary Human Extinction Movement (because the acronym is VHEMT, the movement goes by “Vehement”) has what is essentially a political solution: He wants mankind to agree on a set of policies designed to end mankind.

Let’s be clear: Genocide is not one of those policies. Knight isn’t anti-human so much as he’s anti-procreation. We insist on having children because we believe that’s what we’re hard-wired to do, but Knight argues that this is a selfish mistake. And, yeah, he’s got thoughts on the 2016 election. VHEMT is not going to be endorsing a specific candidate, because that’s pretty self defeating when you want the human race to disappear. But that doesn’t mean Knight is neutral. Think of mating as an act of capitalism and you’ll start to get a sense of — and maybe sympathize with — his world view.

Knight spoke to Inverse about the ecosystem, the horrors of Carly Fiorina, and why you won’t get any Facebook likes for posting about your vasectomy.

Tell us about the VHEMT movement. Should we be trying to bring about our own extinction?

The idea has probably been around for a long time, but if it was recorded it got erased. Many people have independently come to the conclusion that planet Earth’s biosphere would be far better off if Homo sapiens weren’t a part of it. Some people say pronatalist, but I think that’s redundant. That’s the dominant mindset that we have. All cultures have evolved to be natalist because if you’re not a natalist culture you’ll probably die out. It’s gotten us to where we are today. So what we’re recommending is people think before they breed.

But isn’t our only objective as a species to proliferate and survive?

If people think it all the way through, they probably won’t. It’s our natalist conditioning — our cultural indoctrination — that leads everyone to think this is what we do. We grow up, we get married, we have babies, a career, it’s the default life. And if you don’t do that, you’ve got to have some good reasons not to, whereas it should be the other way around. We need to think about why we want to create another one of ourselves when we’re not taking care of all the people that are here today and our increase is causing the extinction of so many other species. We have to live somewhere and, wherever we live, not much else lives. It’s unfortunate for the things that used to live there. It’s totally voluntary. So reproductive framework is an absolutely essential aspect until people all over the world have the ability and the freedom to not procreate, if they don’t want to. It doesn’t do much good to try to convince people to not procreate.

So, VHEMT wants people to choose to do it on their own.

Yes, that’s right. First, we want to eliminate unwanted and unintended pregnancies, and then we want to encourage people not to want that in the first place. There are many other ways of spending one’s lifetime.

Certain presidential candidates might make it a lot easier to do the former. Which candidate is VHEMT behind?

Rather than looking at candidates, I look at policy. The policy of the candidate is what really matters. Jill Stein of the Green Party and both Democratic candidates have expressed support for reproductive freedom, including the right to choose. They also encourage gender equality, which is very important in addition to reproductive freedom. It actually goes hand in hand. Without gender equality, there’s rarely reproductive freedom. There are politicians who are actively trying to remove reproductive freedom by eliminating funding, and they’re also trying to eliminate the results of their meddling with peoples’ reproductive freedom. For example, in New Jersey, Governor Chris Christie eliminated all family planning funding in 2010. They also are staunchly opposed to abortion. These two things, they really haven’t put them together. The way to prevent abortions is to prevent unwanted conceptions: Almost all abortions are the result of unwanted conceptions, so it’s hard to understand what it is unless somebody wants to think they just want to control women. I don’t know how somebody could get into the position of governor if that’s their main mission.

They’re not exactly making it easy to not have kids.

There’s so much outrage and indignation about any attempt to restrict people’s freedom to procreate, which we’re in favor of. But there’s hardly a peep about all this restriction of people’s abilities to not procreate. It’s a basic human right to be able to not create another one of us if people don’t want to. And yet it’s so pervasive in our culture. It’s quite ignored that people don’t have the freedom to not procreate! That’s really very cruel. I think it’s far worse to force someone to procreate when they don’t want to than it is to restrict their freedom to procreate when they want to do more.

Sounds like Carly Fiorina was basically the anti-VHEMT candidate.

I don’t know who could be against planning their parenthood. I think something so important as bringing a new life into the world should be planned. But rather than eliminating the traditional view of family, I think we need to expand it so that it includes other definitions of family. There’s an expression — “love makes a family” — and I think it’s true. Not unconventional families, not just adoption, but fostering, step-parenting, people getting together and calling it a family. People really need a sense of belonging. It’s really essential to our well-being, to belong to a community. That’s part of the reason a lot of people procreate. If you want to be a part of a community, you’ll get a lot of likes on Facebook for it too! Get pregnant, show your ultrasound, and you’ll get nothing but approval, no matter what your circumstances are. People will say “congratulations!” Whereas if you announced getting sterilized, I don’t know if you’ll get that many likes.

The difference is that they are still promoting procreation. They want people to procreate, just at a smaller amount — the amount that would be best for their economy. It’s not exactly voluntary. There are penalties for creating more than two. So those two things are the differences. One is still too many and it’s not voluntary.

So much of your movement is focused on procreation, even though the overall goal is to reduce the human population. Where does assisted suicide fit into VHEMT?

There are a variety of thoughts on the death with dignity or the right to die. It doesn’t really apply to VHEMT because the numbers are so few that it wouldn’t make a difference. We’re really advocating fewer births rather than more deaths. But, when somebody is terminally ill, it seems cruel to force them to stay alive to the end when they would like to have some control over the last thing that they do, which is die.

If you were VHEMT’s third-party presidential candidate, what would your platform be?

First of all, of course reproductive freedom, absolutely everyone who doesn’t want to procreate has the wherewithal not to. That would include surgical contraception, which is very difficult. I would approach it as taking care of everyone who is here already. We’re not doing that very well. Until we can take care of everyone on the planet, really, it’s not just our country, those are artificial constructions, the human family is all one family and tens of thousands of our children are dying every day of preventable causes. So I don’t see how we can continue making more of them. I probably wouldn’t get elected [laughter].

The idea here is that we’re going to voluntarily become extinct to let all of the Earth’s other species continue to thrive. But why us?

Yeah, why us? How did that work out? How did we become the mammal that crossed the intelligence barrier and self-awareness and technology and then all of a sudden became sapiens? Well we like to call ourselves sapiens, we named ourselves twice even! But for a million years, all we had was a chopping stone and did just fine. As far as we know, we didn’t wipe out species. So when we got the use of fire, we did alter things and some species may have gone extinct, but nothing like when we really started changing ecosystems with the wholesale of agriculture. Even our hunting and gathering probably didn’t cause as much damage. Exotic species such as ourselves, everywhere we went we left a trail of extinctions. In Australia, the food didn’t recognize us as a predator so we could just club them in the head and eat it.

What you’re saying is that this is humankind’s unique burden.

It’s true. We’re the only species to ever consider our own voluntary extinction. Or needs to.