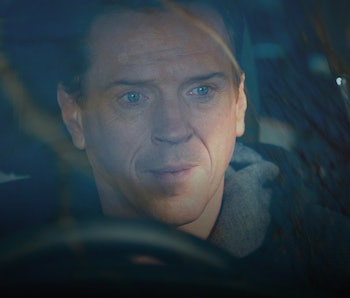 It’s hard to imagine a scenario in which anyone who sat through the previous eleven episodes of Billions could not be satisfied with the Showtime series’ dynamo of a season finale. “The Conversation” (the title would seem to refer to the 1974 Francis Ford Coppola film of the same name, which also revolves around audio surveillance and betrayal) is both more Billions than one ever thought Billions could be, and delivers plenty of unexpected turns of phrase and complications.

It hits all the big, necessary notes, too: There was no way we could get out of this season without Chuck (Paul Giamatti), Wendy (Maggie Siff) and Axe (Damian Lewis) all exploding at one another in different combinations. But did anyone expect Axe swoop in, appeal to Connerty’s discontent with Chuck, and make him a 7-figure offer to come to Orrin’s (Glenn Fleshler) firm? Or Lara preparing to relocate the entire Axelrod family to Russia? Or Connerty to chew out Lonnie (Malachi Weir) for being Chuck’s “shill”?

None of these enjoyable details — or a opening salvo showing Chuck’s headstrong bid to open a prestigious new capital fund — obscure the main drama, which takes its share of unexpected turns. Chuck is stupid and angry enough (after what he believes to be Wendy’s betrayal) to hand off the session notes he stole from her computer directly to Lonnie. Of course, it takes everyone two seconds to figure out they came from him, that Bobby covered all his tracks, and that, in any case, it would all be inadmissible in court. But the tension is drawn out long enough to give Bobby a chance to categorically blame Wendy for his dirtiest deeds making it to the feds. He pulls blackmail fodder on her that he’s been keeping around: her S&M-related search history, mostly. This is enough to prompt Wendy to take Axe’s money. And run.

It also aligns the viewer with her for a moment — Who really is sleazier, Axe or her husband? The decision to trick Axe into unloading a bonus on her and then quitting is, in part, motivated by her final argument with Chuck, which is the most engaging and powerful scene of the entire series. Siff and Giamatti’s relationship has always been something one only wanted more of on the show. They excoriate each other’s morally ambiguous value systems— until they are both in tears (Wendy to Chuck: “You can talk to your way into any kind of justification,” Chuck to Wendy: “Your patients are criminals; what does that make you?”). And it feels like no two performers could play it better. It’s hard to remember a more piercing recent Giamatti performance than this one, which reaches beyond his usual unmistakable, lovably easy-to-parody bad-cop style.

The episode’s only misstep was retreading, a bit too exactly, the form of Chuck and Wendy’s conversation in an implausible, verbose yelling match between Axe and Chuck. The visual centerpiece — the Axe Capital building torn apart after Bobby disembowels it looking for bugging devices that aren’t there — is compelling, but the actual content of the conversation doesn’t get us anywhere unexpected with these two characters. The Billions team knew there had to be a faceoff between our two wonderfully cartoonish kingpins, but it feels like they couldn’t figure out exactly how to use the moment. Essentially, they tell us what we already know these men think about one another (Chuck to Axe: “You infect the whole world, Axe to Chuck: “You’re a traffic cop hiding in federal robes”). That’s not to say it wasn’t endlessly entertaining — some David Mamet-ian equivalent of a long round of shit-talking before a good fire fight on Dragon Ball Z.

But presumably, they didn’t want to use up a repository of tricks that could be implemented more effectively next season, when we’ll doubtless see these men going after each other more viciously or directly than ever before. After all, Axe is “hungrier” than he has ever been — anxious to regain his damaged reputation — and with Wendy gone, Chuck has, as he says in the episode’s final line, “nothing to lose.”