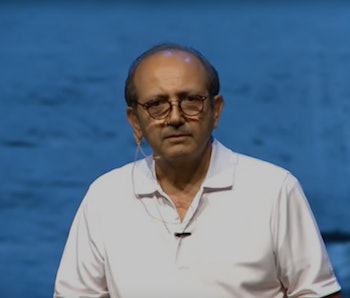 In a different age, Behrokh Khoshnevis would have likely spent his time figuring out how to efficiently build log cabins, the original examples of construction as collection, in the Yukon Territory. But the West has long since been won, leaving Khoshnevis, a frontiersman at heart, without a terrestrial challenge. There’s still Mars though, and Khoshnevis knows the planet — and thinks about the planet — like few others. He doesn’t think of just barren rock or red dirt. He imagines barren rock and dirt can make colonies and communities. He intends to build them.

“I hope that we will have a more civilized kind of human community out there, so there won’t be all of this pain and disaster that we have here,” he tells Inverse.

Khoshnevis is an engineering professor at the University of Southern California, but he’s been moonlighting at NASA since 2011, when he realized his specific construction background might be useful to the agency. If you’ve heard of Khoshnevis, it’s probably because of his Contour Crafting technology — a giant 3D printer that pours concrete into the form of a house or another structure. Basically, it’s how we’re going to print neighborhoods. It’s also how NASA would like to build on Mars.

Khoshnevis’ optimism about the Mars project doesn’t come from a willingness to ignore obstacles, but from a confidence in his technology. He fully acknowledges that human habitation will take time and effort.

“It may take many, many decades, or even centuries, to become habitable,” he says of the planet. “You would rather live in closer, in tight neighborhoods, rather than spreading yourself too thin. You never know about the natural disasters out there. Mars is not quite a gentle planet, either. There’s a lot of storms on it. When water appears there, and when they bring up the temperature, by greenhouse effect or whatever technology they resort to, when they melt the water that is in the rocks, gradually rivers and lakes and streams may appear, and clouds and rain — there could also be a lot of violent flooding and all of that, who knows?”

There are, in short, plenty of challenges when you’re in the terraforming game. There are also, however, plenty of solutions to go around.

Recently, Khoshnevis took top prize in a NASA contest to design new tools to build infrastructure on Mars using the materials already present on the planet. His invention is a rover that can quickly and cheaply build hard, flat surfaces for roads, landing pads, and other foundations. Essentially, the rover comes along and uses a nozzle to inject a material with a very high melting point into the regolith, outlining the shape of a tile. Then, a microwave comes by and heats the regolith to its melting point, so it fuses into a block several centimeters thick. The injected material does not melt and therefore defines the boundary between the panels. In this way, the robot moves along, creating panel after panel until a hard, flat surface of the desired shape and size is created. Let’s call it a floor.

Construction on Mars, and on the moon, is necessarily different from here on Earth. Concrete is the material of choice for construction on this planet, but it requires a large amount of water, which is not sufficiently available or accessible off-planet. Manufacturing structures here, and then taking them into space, is not feasible, either. It costs about $50,000 per pound of stuff that NASA pulls out of Earth’s gravitational field. The most promising space-construction ideas use some sort of heat treating to fuse materials together. Sulfur, for example, melts at 115 degrees Celsius, and is abundant on the moon and on Mars. It can be used as a binding agent to hold space rocks and dust together.

When Khoshnevis imagines the future of colonies on Mars, he imagines very tall buildings, with a lot of protection from the elements.

“Gravity is one third of Earth’s, and therefore with less construction material we can build stronger structures out there, therefore we can build much taller,” he says. “The cost of energy for elevators and all that will be much less. Theoretically everything could be three times as high as here with the same consumption of energy.”

A human utopia on Mars will soon be technologically feasible, but it will take some political will to get there, he says. It will take sustained resources and effort over decades to get the ball rolling, and keep it moving forward. “There really has to be philosophical support for this — that this is the future of humanity, Mars is the closest thing to a livable planet, so we should not miss the opportunity — we should dedicate a good effort in making sure that we go there and we change the conditions of Mars to make it habitable, because one planet is not enough for this amazing species.”