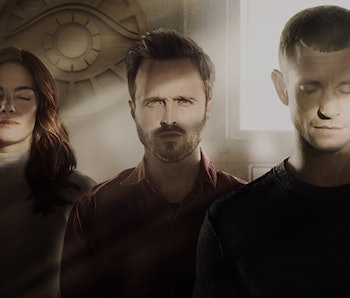 Something’s rotten in Upstate New York, and it’s probably all the green juice that the higher-ups on the Meyerist Compound are shoving down Miranda Frank’s throat.

In Episode 3 of The Path, “Homecoming,” we find that after some Meyerist cronies took Miranda Frank (Minka Kelly) from her home and put her in a van in Episode 2, they brought her to Parksdale. Now she’s occupying a cell-like room “in-house” exactly like the one that Eddie (Aaron Paul) vacates at the beginning of the episode after his 14-sentence is up.

Turns out that they’re trying to get Miranda Frank to “unburden” — that is, admit to having an affair with Eddie in Peru, which is something she didn’t do. Miranda’s refusal to unburden is eating away at Sarah (Michelle Monaghan), who kind of sort of loses it. We see a seriously dark side to Sarah come out in this episode as she interacts with Miranda, who is being held captive by the Meyerists. Locked in a cell and forced to drink something green and truly awful-looking, Miranda is defenseless and Sarah makes things much, much worse.

Things aren’t too great between Sarah and Eddie. Their relationship is still tense after Eddie’s return from his stay in-house and despite attempts to “connect” there’s still a considerable chasm between them. They’re a bit too wrapped up in their own rift to notice that their son, Hawk (Kyle Allen), is stealing generators to do a sort of utilitarian John Cusack-and-the-boombox-in-Say-Anything thing for Ashley Fields (Amy Forsyth), a girl from school whose family is struggling financially and finds their power turned off after getting behind on the electric bill.

Meanwhile, Cal’s (Hugh Dancy) left the compound for a spell to see his mother and get her into an assisted living facility. She drinks a lot, seems to have a touch of dementia and knows how to push all of Cal’s buttons. Within a day, Cal is flying off the handle and drinking again. When he returns to the compound, though, he confides something important in Sarah. He tells her that when he was in Peru, Dr. Steven Meyer told him that the last three rungs of the ladder he’s been searching for have to do with succession. At the beginning of the episode, we learn that Meyer is sick/dying. Now we understand that Cal believes himself to be next in line for the leadership of the Meyerist Movement.

Though not much has come of it yet, we also see Detective Abe Gaines (Rockmond Dunbar) make an appearance at the compound, posing as “Sam Fields” (curious, no?). He’s asking some questions and trying to find out about the Meyerist Movement from within, it seems. He’s not a huge presence just yet, but he’ll no doubt be appearing more in coming episodes.

The best moments of the episode belonged to some of the shortest scenes and centered around Alison (Sarah Jones) and Eddie, whose conflict is the most dynamic element so far. Alison is such a stark contrast to the restrained nature of the movement and breathes some much-needed life and vigor into the show, which tends to lag a bit under the weight of its super-zen Movement. Alison is angry and out for blood and it makes her one of the most compelling parts of the show. Like Gaines, we can only hope to see more of her.

All told, “Homecoming” is a little slow. There are bright moments like those with Alison and a scene in which the extended Lane family fills up a house for dinner. Scenes like this one are a bit reminiscent of Parenthood (also a Katims-produced affair), with a house full of people, a table full of food and some #familydrama unfolding.

In the context of The Path and the sinister underbelly of the Meyerist Movement, they become unsettling and disquieting. They are perhaps the most effective means the show has to remind us that these people are fundamentally like us, even though they find themselves in the throes of a cult that’s doing some seriously dark work behind the scenes.

“Homecoming” works well with regard to the continued development of its main characters, but continues to feel a bit like a waiting room. We see a few storylines start to pick up momentum and feel hints of unraveling to come, but for now we’re hovering in slow-burn territory and waiting to see if and when things are going to ignite in earnest.

It’s still early days, but as the season spins up, we hope to see more of Alison, Detective Gaines and Mary Cox (played by Emma Greenwell and entirely absent this episode). The Lane family may be the nucleus of the show, but these characters hold much of the show’s interest and show the most promise for propelling this plot forward into cult-y chaos. We can feel that something’s heating up, but here’s to hoping that we get some real ignition soon.

Episode 4 of The Path airs next Wednesday on Hulu.