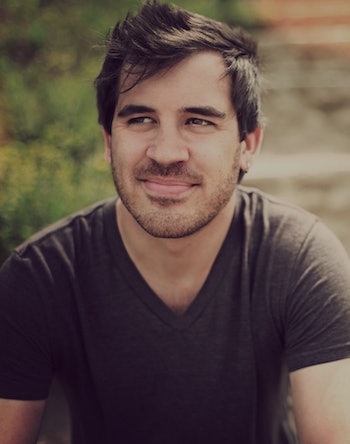 Andy Lange is living the best of both worlds. As a huge musician and producer on the YouTube scene, he’s a heartthrob making Beach Boys-esque rock music. But he’s also that rare musician who has a day job, building an impressive resumé of sound design and production work for major TV shows and video games.

We sat down to ask him about his experiences in studio production, on both sides of the glass.

Andy, what is it like to record commentary tracks with Jim Jeffries for his show Legit?

I’m sitting in the room right next to those guys while I record those DVD commentaries, and I distinctly remember struggling to not laugh and ruin the recording multiple times. Jim and the entire cast of Legit are insanely funny.

I remember Jim had his son Hank with him in the room who was just a baby at the time, and if you go listen you’ll definitely hear Hank on the track. I think Hank started crying at one point and I kind of mimed to Jim asking if he wanted to stop the recording, but Jim just made fun of me and then they carried on with the commentary. I was bummed to see that show get cancelled, they were definitely doing something special.

What kind of background do you need to get into re-recording or ADR? What skills do people need?

Actually, I moved to LA for that day job. I studied audio and video production at Michigan State. I shadowed Patrick Cyccone, a veteran film mixer, and eventually I started working next to him as his mix technician at Dean Devlin’s company Electric Entertainment (Independence Day, Leverage, The Librarians).

People come from all backgrounds, whether it be a big university like MSU or small trade school like Full Sail. Hopefully you can get an idea for what direction you want to go because there are a lot of different roles in the post sound world, dialog editor, music editor, sound designer, foley mixer, ADR mixer, re-recording mixer, etc, and it’s important to align yourself on the road to your goal as early as possible.

Some shows have just unacceptably bad ADR — throws a side-eye at 30 Rock — do you notice great ADR work now? What films and movies have the best and worst of this, in your eyes?

I’ve ruined movies and TV shows for so many friends by telling them that most of the sound you hear in a show or movie is added later except for the actor’s dialogue. But even that sometimes needs to be changed or repaired.

So, when there’s a technical problem with an actor’s line of dialog from set or the higher-ups demand a line change for plot reasons, clarify context, improve diction or timing, etc…we bring an actor in for ADR (automated dialogue replacement) where they have to perform the lines again in sync with their lips on screen with a performance that’s on par or better than what they did on set. It can be very challenging to get the timing and recreate the performance and yes, a lot of actors don’t enjoy it. Some actors, however, truly embrace it and take full advantage of the chance to improve their performance.

One of the most challenging things as a dialog mixer is to then mix that line of ADR which was not recorded on set into the show and make it sound identical to the dialog that was recorded on set. Sometimes there’s just nothing a mixer can do and audiences will inevitably notice it like if a line has to be stuck in an awkward place when the camera is on the back of an actor’s head. But if it’s great ADR work you actually don’t notice it because it sounds just like the rest of the dialog from set. Go watch Titanic again and just know that 90 percent of that film’s dialogue was recorded in an ADR booth after the movie was filmed. MIND BLOWN.

What’s the weirdest thing you’ve ever had to do in a studio?

There was a scene in the 2nd season of Legit where Jim, Steve and Billy and their dads (played by John Ratzenberger and George Lazenby) go to a “happy ending” massage parlor. The sounds I had to mix into that scene while they all sang the song “Don’t Cry Out Loud” will haunt my dreams for eternity. Is that weird enough?

Foley + Volume = Comedy. I think that says it all.

You’ve been on a bunch of shows like Leverage and The Librarians and other cable programming. Do you… not indelicately here… do you like these shows? Are they the kinds of things you would’ve watched if you weren’t working on them?

I tend to gravitate to the more gritty drama stuff like Breaking Bad or HBO stuff, but sometimes I just want to turn off my brain and be entertained. Those shows like Leverage and The Librarians are just pure entertainment while being fun for the whole family and that’s super important.

People that are chasing their kids around all day at home get really tired of having to constantly change channels to avoid all the violence and adult themes on TV, so they really appreciate it when they can leave a show on and know it’s great for all audiences.

Also over the years it’s been cool getting to hang with the writers around the studio and see where they’re coming from. I never realized the extent of research and thought that goes into each episode and it’s really incredible. It’s made me appreciate those shows even more.

You got started in games, on Gears of War 2. How does that differ from TV?

Years ago I worked for Technicolor in a small video game sound department that is no longer around today. I started as an assistant and then eventually started editing dialogue and doing some sound design. It was a client house not a developer so I worked on a bunch of games but Gears of War 2 was probably what I spent the most time on.

Voice actors would come in and we’d record their lines and I’d help out with those sessions and then edit all the lines afterwards. They were doing motion capture on the actor’s faces while they recorded so the actors had to look straight ahead and not down at their script so I would run a teleprompter for them.

Working with John DiMaggio was a lot of fun, he voiced the main character Marcus, in Gears of War as well as the character Bender on Futurama and later Jake the Dog on Adventure Time. I was just starting out but I really enjoyed my time there and the atmosphere was definitely more laid back than the TV and film world.

You worked on a film coming out next year called Geostorm that’s a gigantic destruction film from the team who gave us Independence Day. Tell me everything you can about that.

Yeah, Dean Devlin, who wrote and produced ID4 wrote and directed Geostorm and a lot of things go BOOM both on Earth and in space at the same time. I recorded the LA-based ADR and assisted on several mixes. It was very cool recording Gerard Butler, Ed Harris, Andy Garcia and the rest of the cast. There’s a lot of ADR recording that the audience is probably not aware of and that’s all the background voices. People you see standing around in the background of scenes who look like they’re talking are actually just miming. If you think about it they can’t be talking on set or else the mics would pick that up while the lead actors are trying to do their lines (sorry ruining more TV and movie magic for everyone). So we bring in a group of actors, the “loop group” and record them to add in all those background voices. In Geostorm for instance we recorded tons of radio chatter for the space station scenes using actual walkie talkies in the studio, and then of course the crowds of people screaming. So much screaming…

This interview has been about your day job, but your nightwork is much more rock’n’roll. You’re a musician and producer that you’ve churned out in a small studio in your home. I remember you breaking 100,000 YouTube subscribers. How did you capture such a gigantic wave of social media fandom?

I was playing with a band for a couple years and then my friend Chester See encouraged me to start posting videos on Youtube. I soon discovered I could get more exposure posting videos than playing pay-to-play crappy bars around town. I always enjoyed recording and producing my own material, and I started to meet a lot of other Youtubers who wanted help making their music. So I got way more into producing music for other people and doing collaborations with other Youtube musicians as often as possible. Back then the game was to choose a popular song—something in the top 10 on iTunes for instance—and I would produce a unique cover of it and we’d ride that wave of exposure and new subscribers.

How do you describe your music? What’s your process for writing?

My music can sound like a lot of different things, there’s more laid back folky stuff and then weird crazy layered experimental pop but it’s all in the indie rock/pop realm.

Has your music been licensed for the shows you work on?

I’ve had a few songs placed in two shows on the CW network over the years and in a few indie movies. As for shows I actually worked on, years ago Dean Devlin discovered my song “Not Sure Yet,” and was kind enough to place it in his show Leverage. I think he randomly stumbled upon it on my MySpace page (as I said this was years ago). It was a great thing to happen so early on and I’ll always be grateful to Dean for that. He’s been a huge fan for years and I can’t thank him enough for his support.

I’m going to be releasing a bunch of new original music this year both as a solo artist and as collaborations so watch for that. I co-wrote a song called “Paradise” which was picked up by Armada—one of the biggest EDM labels in the world and I believe that song gets released this month. I’m always doing videos for these songs and covers on Youtube so definitely subscribe so you don’t miss anything. The studio guru in me will be mixing season 3 of The Librarians premiering this fall on TNT.