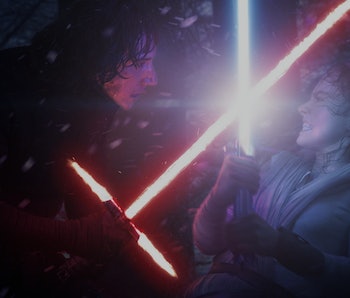 Super-fans have no doubt watched The Force Awakens again and again, but not every audience member was a repeat customer (though at nearly $1 billion at the box office in the US, many people fit that description). With today’s release of the Blu-ray of the newest Star Wars film, medium-level fans now have a chance to revisit the movie and take a closer look at some of the smaller details beneath the gigantic spectacle

As it turns out, there’s a lot to ponder about The Force Awakens. Here are some things still bothering us along with some wishful thinking for what lies ahead in Episode VIII and IX.

How did Lor San Tekka get the map to Luke?

We’re still hung up on Max von Sydow’s character Lor San Tekka, mostly because he dies so quickly, taking with him so much knowledge of the past 30 years. His role, at some point, had to be bigger than simply handing over a USB drive to Poe Dameron. Even his brief conversation with Kylo Ren, during which he says, “I know where you come from, before you called yourself ‘Kylo Ren’,” and then, “The First Order rose from the Dark Side. You did not,” gives us some tantalizing clues about his backstory. Obviously, this hints at Kylo Ren’s parentage, but it also makes it seem as Lor San Tekka had something to do with Ben Solo’s transformation and move to the Dark Side. Maybe he’ll return in some flashbacks, or to show how he ended up with the map to Luke.

Who is King Prana?

Remember the last time Han Solo mentioned the name of someone he owed a debt to or was working for? It was none other than Jabba the Hutt, who didn’t even show up until Return of the Jedi. In The Force Awakens, Han and Chewie were hauling Rathtars for someone named King Prana, who will hopefully show up at some point and either help or hurt our main characters on their quest to bring balance to the Force again.

Did Luke discover anything at the first Jedi temple?

There’s been some rumbling on the internet that there are gravestones on the Jedi temple island where Rey confronts Luke Skywalker in the final shot of The Force Awakens, and it hasn’t been confirmed whether they were added by the production or whether they were just there because Skellig Michael, the location in Ireland where the scene was shot, is actually an ancient Christian monastery where monks were buried. Hell, it hasn’t even been confirmed that they’re even gravestones. Regardless, we have to learn why Luke even went to the first Jedi temples in the first place, and what knowledge he could have gained there other than simply leading a Yoda-like life of solitude.

Where did Finn come from?

Screenwriter Lawrence Kasdan has said Finn’s character came out of the desire to give the formerly faceless stormtroopers a legitimate identity since they’re no longer clones, which was a very smart move. That said, we didn’t really learn anything about Finn, beyond the fact that he was a Stormtrooper. Considering Star Wars is ultimately a family soap opera, chances are he isn’t just some random guy who happened to bump into Poe and Rey. We’re not saying he’s Lando’s son or anything (though that’d be awesome), but Finns origins have to factor in somewhere, or else he’d just be a hollow character. We see Finn age in a digital read out on Starkiller Base when Hux is discussing his stormtrooper going AWOL, and hopefully some of this comes into play down the line. Still, Finn kills a whole lot of his former stormtrooper friends in The Force Awakens, which means the First Order and Captain Phasma will definitely want their revenge.

Will Luke use the Jedi training ball again?

There’s a nice easter egg moment on the Millennium Falcon when Finn uncovers the remote robot that Luke uses to begin his training in A New Hope. Beyond being mere fan service, it’d be great for this thing to pop up again for actual Jedi drills. It’s still on the Falcon when Chewie and Rey go to the Jedi temple to confront Luke, and it’d bring a tear to the eye of any Star Wars fan if Luke trains Rey with it. Mark Hamill is a year older than Alec Guinness was when he played Obi-Wan in the original movie, so it’s be a great echo of the original trilogy to see that happen again.

Where will Kylo Ren complete his training?

After Poe and the Resistance help destroy Starkiller Base, Supreme Leader Snoke tells General Hux to “Leave the base at once and come to me with Kylo Ren. It is time to complete his training.” It will be fascinating to see Snoke up close and watch him train Kylo Ren himself. There’s been speculation that his gigantic hologram is to mask his small stature, so if he does train Kylo as a Sith it’ll be great to see him as a kind of evil Yoda-type character whose great power contrasts his diminutive size.

Where did Kylo Ren get his name?

We get a little glimpse of what are supposed to be the Knights of Ren during Rey’s trippy scorched earth dream sequence. The Knights are the shadowy band of baddies that help push your Ben Solo into rejecting the training of his uncle Luke towards to the dark side and ultimately into becoming Kylo Ren. “Ren” is obviously from the group, but where did this ceremonial “Kylo” name come from? We have our guess (sKYwalker soLO), but we look forward to a big dramatic reveal down the line, maybe.

Will we go back to Cloud City?

Fans have been picking apart Rey���s dream sequence from the moment the movie was released partly because it’s filled with fascinating little snippets of recognizable images. It’s driven fans — us included — crazy, as they try to figure out what it all means for Rey’s parentage. One of the most notable parts is when Rey finds herself in a ghostly version of the hallway from Cloud City, which is where Luke lost his hand and his lightsaber, and found out Darth vader was his father. Is the peek at Cloud City foreshadowing of going back there (and maybe running into Lando, because why not?) to find out the answers behind the journey of the saber, or is it just to make the Luke, Rey, and Vader connection?

What will Hux’s role be from here on out?

Hux was a great foil for Kylo Ren. One was the military man pragmatist while the other was the innately gifted and emotionally volatile guy. But after Snoke tells Hux to round up Kylo and get back to safety, what’s left for Hux to do? His beloved Starkiller Base is kaput, and his approach to defeating the Resistance failed. Will he still follow the rules of the First Order because it’s in his nature, or will he maybe be tempted to snitch because Snoke loves playing favorites with his rival, Kylo Ren? We hope it’s the latter.

How will Vader’s burned helmet factor into the next installments?

Perhaps the best symbol of The Force Awakens was Darth Vader’s burnt helmet. The scene of Kylo alone, speaking about the push-and-pull of the Force to his grandfather’s melted visage was more powerful than any moment in the dreadful prequels combined. Kylo’s mope room was on his star destroyer, which we think is still intact now that Starkiller Base blew up. But if it went up in flames, did the helmet go with it? Or did Hux and Kylo make one pit stop to that room to scoop it up after saying bye bye to the battle station? It seems wasteful to just get rid of such a powerful image, and we hope the spectre of Vader rears his ugly head in the future movies to steer Kylo towards the dark side again.