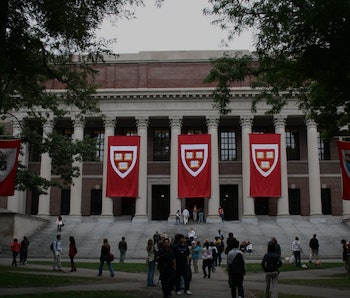 Today, Harvard University President Drew Gilpin Faust, along with Congressman and civil-rights icon John Lewis, will unveil a plaque dedicated to the memory of four enslaved people who lived and worked at the university’s Wadsworth House in the eighteenth century. The ceremony follows the University’s decision earlier this month to change the Harvard Law School’s seal after pressure from student groups. The seal incorporated the coat-of-arms of the Royall family, who established the school’s first law school professorship in the 1700’s, but gained a reputation for being especially vicious to the slaves they owned.

The moves have been applauded by Harvard staff, and within the ranks of academia more generally. Potentially, they signal the beginning of an effort to reckon with the Ivy League’s slave history. A prominent historian herself, Faust has never shied away from talking about the economic importance of slavery in the north, a historical reality many New Englanders would just as soon forget. Of course, as soon as the announcement was made, critics from both sides of the political spectrum hammered the move, albeit for much different ideological reasons.

Many on the right have already decried the plaque as another example of institutions of higher-learning paying protection money to social justice warriors. This argument assumes that by copping to a “legacy” of slavery, Harvard isn’t so much worried about history as the radical, race-card slinging Black Lives Matter movement. After all, as the “stomping muddy boots on history’s new couch” argument goes, no student attending Harvard in 2016 has ever been a slave or slave master. Why keep dredging up an institution that was abolished 150 years ago, if not to make white people feel guilty about being white?

On the other side, some leftists see the plaque as yet another form of feckless lip service; a PR move designed to let white academia pat itself on the back without actually effecting any real change. Should the simple act of publicly admitting a well known truth centuries after the fact be lauded as a necessarily “bold” or “courageous” step? If the university’s intent is to truly make amends for wrongs committed, surely the acknowledgement of the sins of the past should come with more actionable steps to address current structural racism.

For her part, Faust penned an op-ed in The Harvard Crimson explaining that the process is neither about capitulating to special interests preying on white guilt, nor claiming any sort of academic moral high ground, but rather an honest understanding of history. It’s her hope that a process of bringing light to the uncomfortable past will lay a foundation that will allow current and future generations to interrogate the crimes of the past as a way to challenge their own conceptions of right and wrong.

“If we can better understand how oppression and exploitation could seem commonplace to so many of those who built Harvard, we may better equip ourselves to combat our own shortcomings and to advance justice and equality in our own time.”

Yet the lingering question becomes: what does any of this —the ceremonies, the plaques honoring slaves, and the erasure of slave owners — actually accomplish?

Intellectually, this country has never really come to terms with its history of slavery, and now more than ever, attempts have been made to turn the horrible legacy into a more palatable, almost transactional arrangement. One only needs to look at the history curriculum in Texas high schools where slaves are described as workers, hopeful Christian converts who went through some hardships, sure, but were ultimately sacrificing so their descendants could eventually have a better life.

In that regard, a continued desire for truth — making sure history doesn’t become a nationalistic Hallmark card — is an important national exercise. In the North, where the legacy of slavery has been rather carefully and intentionally constructed to be exclusively a “southern thing,” examining how Northern institutions benefited from slavery is especially useful. While it is true that no one attending and/or employed by the university in 2016 has ever been a slave or slave owner, even a Yankee institution like Harvard became the revered symbol of elite higher-education we know today, in no small part due to the institution of slavery.

If we accept the fact that Harvard administration is acting in good faith as opposed to engineering some shrewd Kumbaya PR moment, then we also have to be careful not to make more out of the plaque than intended. For those is the pro-reparations camp, the Wadsworth House plaque shouldn’t be punished for being a missed opportunity at some form of financial amends. At the same time, it’s important not to shower praise and proverbial cookies on a vaunted liberal institution for finally owning up to its own basic truth.

Regardless of the number of ceremonies held or plaques dedicated, public institutions admitting to their legacies in slavery isn’t going to end racism. That’s not the point. The point is that history matters. We don’t need to rewrite it; we need to edit our very rough first draft.