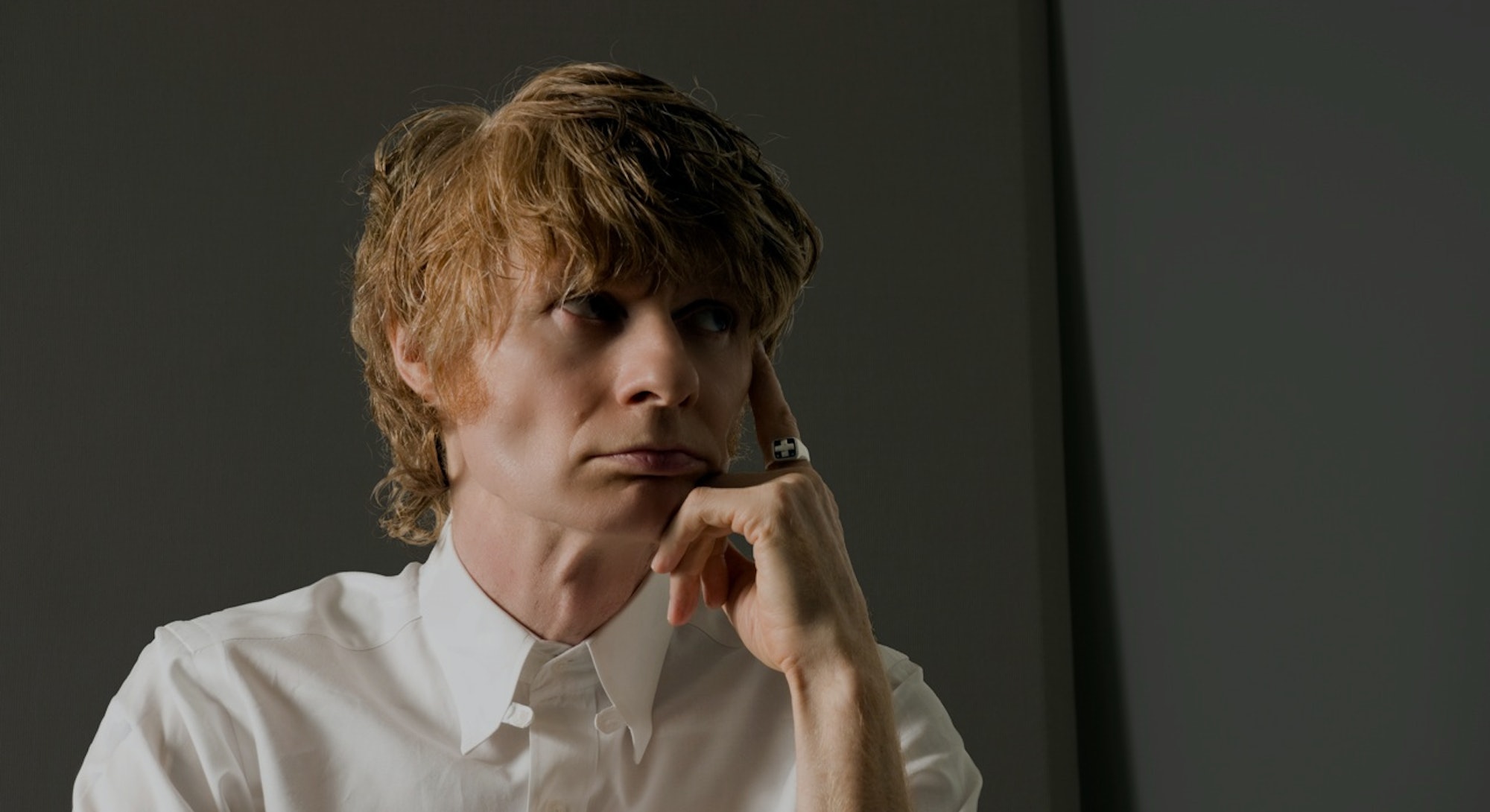 Thanks to a series of twists and turns, I was given the opportunity to interview one of my heroes, JG Thirlwell. If you don’t know him, he’s the composer behind the soundtrack to The Venture Brothers on Adult Swim. That’s how I found him in the first place, because the show, from the start, seemed built upon his complicated, genre-less experiments in sound that mixed big band and punk and jazz and cinematic strings, and whatever sonic marvel he felt like adding in the moment.

From the start, I was hooked on just trying to figure out how a single person sits down and begins to compose something like this. Thirlwell has been making (and unmaking or remaking) music under dozens of different names since the mid 1980s. He’s lived entire lives as rock’n’roll characters and has reinvented himself more times than Bowie.

Hell, his discography wiki seems like a prank. He’s released more albums under funny side-projects than most mainstream bands have — not to mention collaborations and remixes from everyone from Nine Inch Nails to the girl I once saw open for St. Vincent in a tiny venue. He has an impenetrable, 25 year professional history, and few musicians have built their empire on a foundation of bleak, dark humor in the way Thirlwell has. Or Clint Ruin, Frank West, Foetus, or any of the names you may know him by.

If you haven’t checked out Foetus where some otherworldy art got made, do so.

After more than ten years on Venture Bros. it looks like the show Archer is grabbing Thirlwell to score its newest season, which reboots the show yet again, this time in LA. We spoke about putting strings over hip-hop samples and good-ass opera jams.

JG, I wanted to start by letting you know the only time I’ve ever been arrested for speeding in my entire life, I had your music playing in the car. I don’t mean to blame you, but this is absolutely your fault.

It’s fine. I’m really thanking you. So let’s talk Archer then. How did you come to be the score guy for the funniest animated spy show on television?

The creators contacted me and asked me what it was that I did on Venture Bros. I scored to animatic, scored to picture, talked to the director and mapped it all out. That was our process. So they asked, “How would you like doing that for Archer”? It came from them. And it’s a big deal because this is the first season they’ve used a composer. They’ve been using needle-drop stock library music and wanted to take it to the next level.

Was that always your process with Venture Bros? Scoring to animatic and such? I’d heard varying reports, including that most of the show was written to music you’d already composed.

When Jackson Publick was working on the pilot someone turned him onto my side project, Steroid Maximus. That’s how he imagined the Venture universe to sound. He tracked me down and asked me about scoring the pilot and they wound up just licensing stuff from me.

There was some unpublished things and some demos they picked up from the collection of things I hadn’t unleashed yet. Then Cartoon Network picked up the show and they called back to ask if I wanted to soundtrack an entire show. I really thought about it.

You really thought about it? You weren’t sure if this was what you wanted to do? I’m kind of shocked by that. What did you have to weigh the choice against?

Taking on a thing like that meant I had to put other things on the backburner. What was the the forefront of my mind though was “When am I going to get an opportunity like this again?” You know, to do what I do musically, but in this context.

It took some time to find my feet and find my language and find a rhythm where I wasn’t over-riding their work. Also, working quickly became an issue. The pace in TV is much different. The first season I worked so slowly. By the third season we had a different methodology. I’d block things out with Jackson and then we’d talk about an episode and the tone of things and get really nuanced. Really small into the moments. I had to learn a lot of things, like not so much Mickey Mousing the characters (syncing music to eye blinks and such) but scoring an action movie as a living thing.

Don’t answer if you don’t want, but are you a fan of either of these shows?

Oh, of course. I’d seen some clips of Archer before we got started. I like that too.

Both your shows are about sort of… this isn’t the word… spoofing a sound? The original scope of Ventures was very Johnny Quest and Archer is so James Bond it seems unavoidable. Do you write with certain pieces from that in mind or are you operating on your own?

I’m staying true to the Archer spirit as I understand it. Is this a proper score where the music is reflecting the action and dropping for the dialogue? Is it cinematic? I’m developing a music vocabulary for Archer that is distinct from Venture Bros. That show is a bit more an action bombastic and symphonic score. Archer is a bit more jazz inflected.

It’s got those elements to me, and it’s moving all over the place. On both shows you have the opportunity to turn the universe on its head because it is drawings instead of live action — you can go anywhere. And the music does that same thing. Venture has called me to do things that have been atypical. In the last season we were doing Gotham Underground and Greek Islands and Outer Space. That’s developed and fleshed out as it’s come along. Volume 2 of the soundtrack is coming out in June on vinyl and CD and digital, which is very exciting. It’s easy to see that expansion when they’re all collected.

Where do you start writing? I’ve never known. In my head you’re at a computer but also a piano and also in front of an entire orchestra. Tell me how to be you.

Usually, I don’t sit down at an instrument. I have the idea in my head. I’ll look at something and I’ll know. At the computer I’ll start fleshing it out with symphonic sounds or string sounds, usually in the program Logic.

I’ll pull up a scene and watch it, then pull up Logic and find my tempo. The thing with scoring and even with commissions is that you usually have limitations. You know the instrumentation: cello solo or string quartet or whathaveyou. You know how long the piece is going to be and for whom. In scoring, there are scoring notes: mood and length.

I’ll make my notes on an episode with cues and when something is a minute and a half long, I know where it’s got to hit and dip for dialogue or if it needs to become mysterious or sentimental. Each cue has an arc, just like a song. Before this, I had a blank canvas and that’s a whole different way of working. This is better and harder.

How much time do you spend working on a season of TV?

Venture Bros is very sporadic. Sometimes there are years between seasons. There’ll be a long time between episodes so I can drop things and come back to them. The last episode I did had an enormous number of cues, and even when those are twenty seconds long that takes a while.

Your shows have both just done reboots that reset the locations. Venture Bros moved to New York (which is a great choice for both you and the creators) and Archer is moving to LA.

Archer isn’t just in Los Angeles. That might be all I can say on that. I didn’t really try to do an LA jazz tinge so much as the best work I could produce that would serve the show. When Venture Bros moved to New York there were references to New York in that score. That was unavoidable.

You’ve done so much collaboration over the years in various forms, is there any chance you’ll choose to do that in your scoring work?

Not for scoring, no. But I do love collaborations. I’m collaborating with a musician named Sarah Lipstate who performs as NOVELLER. We’ve played live a bunch of times. She plays guitar through effects, with bows and other implements, and I play synths like a Korg and a Little Fatty. We’re making an album of that.

Wiseblood was a collaboration in the 80s and early 90s that spawned a bunch of music and an album. Beyond that, for the last 15 years Ive mostly worked with ensembles. There’s a point where I started using musical scores, and coming out of the darkness is what that felt like. Just working with people who could play music instead of teaching people to play by ear. It was the next step up.

You did an incredible album complementing the work of Zola Jesus. How did that come about between you and her?

She got offered to do a show at the Guggenheim and she wanted to arrange for string quartet to back her and she had a list of arrangers she wanted to work with. I was on it, so I said I’ll do one and send it to you. She liked it, and I did the rest of the songs too. That was a big success and then that became an album and a tour across Europe and the United States. Pretty much as good as it gets.

Finally, do you have a scoring dream? A project or franchise or anything you’d love?

I’d like to do one major action movie before I die. I think that I’m ready. Lizards and robots stomping around would be preferable. I’m really happy with the path I’m on that moment.

I’m working with video artist Tony Oursler on a project that premiers at MoMA in June. So I’m finishing the soundtrack album for that and that’ll be available at the same time as Venture Bros. Beyond that, I just want to work with orchestras. I’m trying to make an opera — of which I’ve spent 3 years on — so I want operas and orchestras and choruses and movies. I like to keep it green, and keep my fingers in a lot of pies. It keeps it fresh for me.