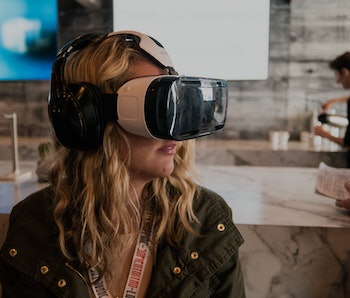 “Meatspace” isn’t a new term. In fact, it’s been around for a few decades. But with Oculus Rift units shipping and the impending dawn of virtual reality, now feels like the right time to start using it in earnest.

Simply put, “meatspace” refers to the physical realm, the world of the tangible, and the opposite of “cyberspace” and the digital world. Though there’s some debate over where the term originated, it has roots in science fiction and is often thrown around in discussions of how we interface with the online world. A particularly amusing story from Terry Bisson called “They’re Made Out Of Meat ” doesn’t use the term directly, but gets at the heart of the term: we’re all just a bunch of meatbags wandering around the planet wondering how our hair looks, if we have enough money, and if there’s something in our teeth.

We’ve had an online world for what seems like ages now. It’s come a long way since the days of “You’ve Got Mail” and Away Messages, but thus far the term “IRL” has sufficed. So why should we assign a new term to the same idea, the idea that what happens on a screen is altogether separate from the lives we lead offscreen?

Well, I’m not sure if you’ve heard, but virtual reality’s making a play at changing the game pretty dramatically. Oculus Rift units started shipping this week, and HTC’s Vive and Sony’s Playstation VR are going to be right on its heels. VR is still in its infancy, but make no mistake: it’s not just a very fancy ViewMaster — it absolutely has a chance to fundamentally upend the way that we approach, interact with, and consume content.

If you’ve never strapped on a headset, it can be difficult to understand what VR feels like. It’s not so much that being inside of a headset makes you feel like whatever’s in front of you is your real world, it’s more like it makes you forget that it isn’t. That’s what VR’s all about: Tricking a part of your brain. Even though there’s a part of us that understands that what we’re seeing isn’t real, our eyes and our stupid lizard brains are fooled pretty damn easily, and VR’s figured out the mechanism for fooling us.

With VR, there’s an opportunity to interact with digital worlds unlike any before it. With peripherals like controllers and the specially-designed treadmills, we’ll be able to walk around in and “touch” things in digital space. In time, VR may come to be the place where we learn, relax, watch TV, play games, and interact with others. Like the internet and television, VR has the potential to one day become a place where we spend a lot of time — a lot of our real lives during which real time is passing and we’re approaching our very real deaths.

The short answer is: Because it doesn’t imply a value judgment. The problem with “IRL” is that it assumes our experiences in physical space are more valuable and profound than our experiences in virtual or cyber spaces. This simply isn’t true. In the words of Albus Dumbledore — or Dumbledore’s imaginary ghost, if you really want to get into it — “Of course it is happening inside your head, Harry, but why on earth should that mean that it is not real?”

At its core, “meatspace” is as much about reducing us to our silly, fallible, fleshy, impermanent condition as it is describing a space outside of the wires and tubes of cyberspace. Let’s lean into it — we could all use a healthy reminder that we’re just a bunch of meat bags with expiration dates when we accidentally hit “Reply All” or make a typo in a Tweet that’s already garnered too many likes and replies to delete.

We’re all going to die someday, so let’s make an effort to go out and experience the meatspace in all of its tangible glory — after one more episode of Battlestar Galactica.

The nice thing about “Meatspace” as a term is that it is so aggressively literal that it doesn’t necessarily have an expiration date. That said, the term will become problematic if we use surrogates (remember that terrible Bruce Willis movie) to operate in physical space. Right now, there is a pretty clear distinction between how we interact with our corporeal forms and how we interact by digital or electronic means. But, even as we speak, telepresence robots are changing that. So, yeah, we’re going to have to think of something else over the course of the next decade.

For now, though, let’s start by losing “IRL” from our collective vocabulary.

More like this
Gaming
8.3.2022 6:00 PM
We Met In Virtual Reality offers a hopeful but flawed vision of the metaverse
By Willa Rowe
Innovation
19 hours ago
Scientists create fake leaves that generate a clean fuel source
By Sarah Wells
Innovation
16 hours ago
Can we terraform Mars? Scientists may have made a major breakthrough
By Jeff Nagle
Share: