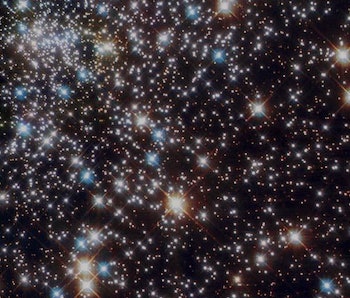 There are an estimated 1 billion trillion stars in the universe. (That’s a 1 followed by 21 zeros.) Each one is unique, but, generally speaking, you can divvy them up into special classes, based on a certain set of criteria. This helps scientists to better wrap their heads around what kind of characteristics to expect when watching and observing those big balls of hot plasma hanging around in space.

These classifications are largely centered around spectral characteristics, which comes down to the type of electromagnetic radiation the star is spitting out (i.e. it’s color) based on its ionization state. The spectral state is usually a pretty good indication of a star’s average temperature and density.

But, more importantly, the classifications grant us a very human opportunity to be judgmental and rank the different classes of stars based on arbitrary criteria. So, without further ado, here’s a subjective ranking of the classes outlined under the Harvard spectral classification system — one of the more popular modern systems used by astronomers.

You might better know M class stars based on their red color. Here’s why they’re in last place: They’re the most common stars found in the universe, making up about 76 percent of all main-sequence stars. They have the least amount of brightness. With a range of just 3,860 to 6,200 degrees Fahrenheit, they’re the chilliest stars out there. For all these reasons, they’re in last place.

The only redeeming qualities of M stars is that some of them happen to be big as fuck. Ever hear of the term Red Supergiant? That’s when a rare form of these babies swells up to something between 10 and 40 times the size of our own star. Cool, right? But that’s also kind of obnoxious, if we’re being real.

These glowing oranges make up about one in every eight stars. Some are giant, but most actually have about 20 to 55 percent less mass than the sun. They’re hotter than Ms, but colder than yellow stars like the sun.

K class stars are actually pretty boring in almost all respects except one: scientists looking for aliens on other planets are obsessed with them. With temperatures of about 6,200 to 8,900 degree Fahrenheit, they provide a pretty optimal environment for any planets nearby trying to raise some organisms. So exoplanet researchers get particularly jazzed about studying star systems hosted by Ks.

Don’t know what a G class star looks like? Look up. Our sun is a G (ain’t that the truth, amirite??), and so are about 7.5 percent of other main-sequence stars. Other famous Gs include Alpha Centauri A, Tau Ceti, and 51 Pegasi. The vast majority are pretty much the size of the sun.

So why slot G stars at number 5? Well, they get points on the board for being good for the evolution of life (exhibit A: EARTH), but apart from that, they suffer from the same problem that Ks do — they’re kind of boring. Gs are a pretty stable class of star. They’re the type you’d want to marry, sure — but if you’re trying to go out for the night and have some fun, you’ll want to pick something a little exciting.

They’re not quite white, and they’re not quite yellow — they’re yellow-white. Fs can heat up to about 13,000 degrees Fahrenheit, so they’re typically a little more fiery than something like the sun. The white glow is due to the ionization of neutral metals like iron and chromium. Fs aren’t very common — only about one in every 33 stars is an F.

The chances a planetary system with an F can support life? Not great.

These guys are white. That’s just their thing. A class stars are fairly rare — comprising just 0.625 percent of all main sequence stars — but they’re a pretty bright bunch. They are usually about 13,000 to 17,500 degrees Fahrenheit. The As also tend to rotate really quickly, allowing them to spew off excess heat and radiation. Again, this is bad for habitability, but great for an exciting night.

B class stars are probably the most beautiful type of stars you’ll get to see. Their very bright light gives off a wonderful blue-white hue, with high amounts of energy and temperatures that go up to an insane 53,500 degrees Fahrenheit. They usually boast masses between two and 16 times that of the sun, and give off pretty powerful stellar winds. They’re pretty rare (about 1 in 800) but they’re hard to miss when you’re peering off into space.

All of that energy also means they don’t tend to live as long as the other forms of stars. The only ones that seem to eject more energy and burn out faster are …

Remember that old Neil Young line, “It’s better to burn out than to fade away”? These stars embody that ethos like it’s the end of the world. And, for Os, it kind of is: They have extremely short lifespans compared to all other stars.

On the plus side, however, these blue balls are the brightest, most powerful of all the other stellar classes. They make up just 0.00003 percent of all other stars. They reach temperatures hotter than 53,500 degrees Fahrenheit. They’re incredibly dense, containing about 16 times the mass of our sun.

In short, O class stars are treasures of the universe. That’s why they’re number 1.