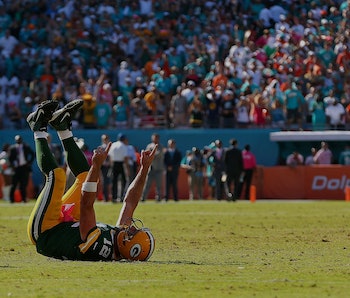 Aaron Rodgers saw a UFO. He doesn’t talk about it very much, probably because he knew articles like this would happen, but he is reasonably convinced that he saw an alien spacecraft in the sky near a nuclear power plant in New Jersey in 2005.

Rodgers chatted about his extraterrestrial experience on Nerdist’s “You Made It Weird” podcast on Wednesday, describing the experience in methodical detail.

Shortly after declaring himself for the NFL draft, Rodgers was hanging out at a friend’s house in New Jersey on a snowy night in February.

“It was one of those bright nights where it’s overcast but there’s enough light from the moon reflecting off the clouds, I’m guessing, that you can still see things. And the next thing you know, we saw something in the sky,” Rodgers said.

Rodgers said he and the gang heard a strange siren echoing from a nearby nuclear power plant before the object came into view.

“It was a large orange, left-to-right-moving object. Because of the overcast nature of the night and the snow, you couldn’t make out…it was behind the clouds we were seeing, but it was definitively large, moving from left to right…It was me, Steve, and his brother that saw it. And it goes out of sight and we look at each other and go, “What in the fuck was that?”

As the light moved away, Rodgers said, he heard the unmistakable roar of four fighter jets going overhead.

While UFO sightings are usually debunked, Rodgers wasn’t joking about his experience. As he noted later in the interview, there’s a lot of shit that goes on that we can’t fully explain. And he’s certainly not the first public figure to acknowledge an extraterrestrial experience.

You can listen to the full podcast here, with Rodgers’s alien experience starting at about 14:40.