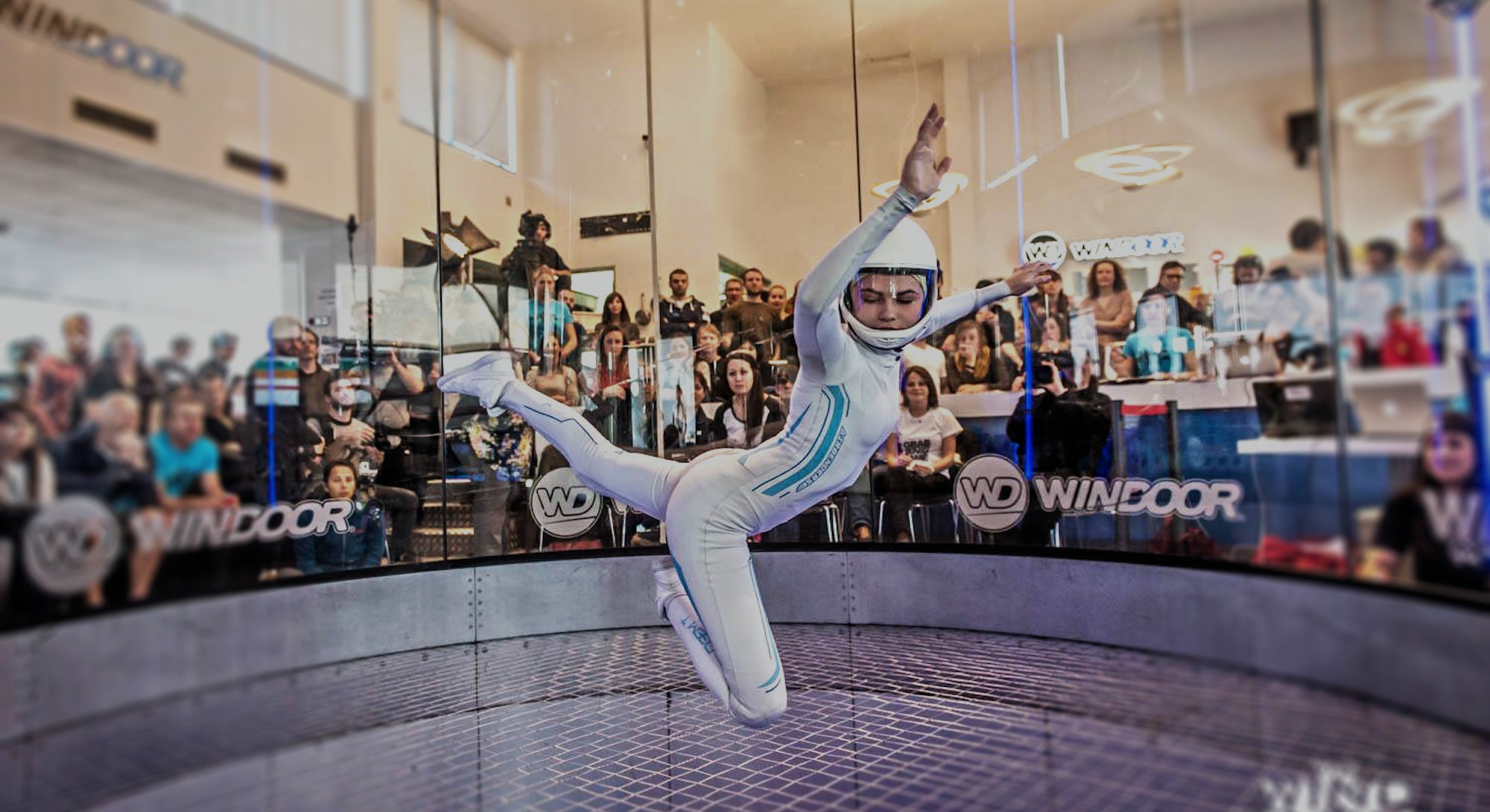 The experience of watching Maja Kuczynska do what she does best is almost ineffable. The movements are weird and performances defy gravity and expectations. It’s no wonder — or surprise — that when Kuczynska, a 16-year-old with a legitimate claim as the best in the world at indoor skydiving, uploaded a video of a performance in January, the internet went nuts. Simply put: Very few people had seen anything like it before.

“Look at the dancing!” said the internet, expressing a sentiment that, from Kuczynska’s perspective, was mixed.

She’d prefer you didn’t call what she does “dancing,” though it’s just as striking. And with good reason. Dancing is something you could do right now. Not so much with creative indoor skydiving, which she considers a sport, not an art form. “It’s called indoor skydiving,” she says. “That’s the name of the sport. But you can also call it indoor skydancing, which is kind of, like, a new term that somebody decided to name what I do.”

Call it what you want, but Kuczynska flies. She flips, twirls, and gyres all around a wind tunnel. Even here, the English language does not suffice: it is unnatural to describe the beauty of a human in flight, except, perhaps, by way of simile: Kuczynska is like a hummingbird, graceful and fluid in the air. She is a purveyor of future dance, an air maneuverer, a weightless acrobat.

Kuczynska was born in Poland, but for 12 years of her life, lived elsewhere. She now lives in Wroclaw, a city in Poland. Her father skydived as a hobby; when Kuczynska was 10, she jumped out of a plane for the first time. (Tandem, of course. “Skydiving, by itself, is not my thing. I do indoor skydiving. I would like it, except I just don’t have the time, or, well, the funds, I guess, right now. You can’t be good at everything.”) She did gymnastics for six years. In Prague, after moving from Kiev, her family discovered a newly constructed wind tunnel. “I started flying in that tunnel,” she said.

But she’s nobody’s protegé, per se: In skydiving, she says, “You don’t have one specific trainer you’re going to stick with. There’s just specific people that are good at different things. These coaches jump around different tunnels in different countries, and you buy time with them. So, I’ve just flown with a bunch of different people.”

And she choreographs her own flights (“Nobody tells you what to do”). Sometimes, though, even she struggles to talk about her work: that’s how it goes when you’re inventing. “Obviously, there are terms,” she says. “Each move has it’s name, usually, unless… Well, not all moves have their own names, because I’ve made a few moves and I haven’t named them.”

Last year, Kuczynska took first place in the Junior Freestyle at the inaugural Skydiving World Championships. This year, she won second place at a competition at Windoor in Empuriabrava — but in the “open” group, not in the junior group. She’s looking forward to both the Fédération Aéronautique Internationale World Cup later this year, and, next year, another shot at the World Championships.

Inverse spoke with Kuczynska in an effort to learn more about this future sport.

What’s it like to do what you do? Can you describe how it feels, and what goes through your head while you’re flying?

Flying requires a lot of thinking — in an abstract way, I guess. You have to imagine the whole space you’re moving in. You’re moving in three dimensions, unlike when you’re running, or walking, or dancing. When you’re dancing, for example, you have two dimensions. You can go whichever way — sometimes a little bit up and down. But, in the tunnel, you can go everywhere. And, again, you’re constantly in a sort of motion. So, it’s hard to think about something specific when you’re moving at, like, a speed of 100 kilometers per hour at a wall.

You just have to focus a lot so you don’t hurt yourself.

Is it blissful, to you, would you say —

It’s not stressful at all. Because I’ve been flying for five years, it comes as natural to me — like, open moves and flips and all that — it just comes as naturally to me as jumping would come to a person who doesn’t fly. After a while, you just get really used to it, and you don’t have to, like, calculate anything in your head.

I often think of a song, and I’ll just hum the song in my head while I’m flying. Randomly.

Is it good exercise? How tired do you get after a single routine?

For me, the maximum I can stay inside the tunnel, flying constantly, would be about 20 minutes.

How common are really serious injuries?

I know of only one person who really, really hurt themselves. But, it’s a relatively safe sport. While you’re learning, you always have an instructor and a spotter. There’s an instructor who teaches you, who’s inside the tunnel, and a spotter who stands by the door and makes sure you don’t hurt yourself. So, you’re not gonna really hurt yourself. You have knee pads, elbow pads, a helmet — so, there’s kind of a minimum chance of hurting yourself. Unless you’re just being stupid, and you’re not taking care of yourself, or you go in drunk or something. Usually stuff happens if you’re flying by yourself and you’re not being smart about it.

So you haven’t had any scares, even?

I hurt my hip once, a lot, and oftentimes you get a lot of bruises. I got a concussion once, too.

Jeez. Just from slamming into the wall, or…?

Oftentimes people will get bruises, because when you learn specific moves you will bounce off the net, and the net is a metal net — a metal, hard net — so it kind of hurts and you get bruises all over your back. But I never actually did that. I hit my hip really hard one time, and it was bleeding. And, as for the concussion — it was, again, because I was being stupid, as I said before — [laughs] — and I flew up too fast, too high, and I hit the ceiling with my head.

Is this a normal activity in Europe?

[Laughs] … No? It’s, uh, no — it’s not like, magically, in Europe, we have tunnels and everybody flies. There are also tunnels everywhere else. It’s about as common in Europe as it is in America.

But the airdancing, or what-have-you — is it centralized in any particular location?

I’d say there’s different styles of flying between Europe and America, and now this… ‘dancing’ thing is very, very new. Like, nobody’s really done it before. There’s been only one competition so far with this type of freestyle. And everybody who does it, now, is European. So, I guess it hasn’t gotten very far in America yet.

Do you expect the sport to take off in the future?

Yeah. Yeah, definitely. I think it’s the most visually pleasing of all the rest, and I think it’s the most interesting for people who aren’t really into the sport. Because nobody really cares about, like, the belly 4-ways, for example, to just watch if you don’t fly. And the freestyle — the indoor skydancing — is really interesting just for random people. Because it… looks cool.

I agree. I mean, I was playing the video in our office earlier today, and my boss walked by and just said ‘Holy shit.’

[Laughs] Yeah, yeah. I’d probably have the same reaction if I had nothing to do with it.

Could you see it becoming a more popular, mainstream, competitive sport, or even an Olympic sport one day?

Yeah, definitely. It’s just a form of dance, I guess. Well — it kind of annoys me, in a way, that people started to call it a dance, because it’s so physically hard. It’s more of a sport, physically, but it looks like dancing.

Well, you make it look easy.

Yeah, it does look pretty easy.