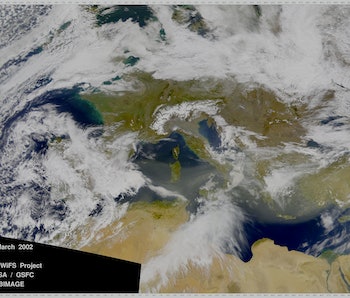 Greece just can’t seem to get a break. The country in the midst of an interminable economic crisis, and on the front lines of a tragic migration crisis, now has a new foe to overcome — a cloud of Saharan dust blown in from across the Mediterranean.

The dust storm blew in on Wednesday and cast a haze over the country. Officials advised those with respiratory conditions to avoid going outside for a few days. Crete, Greece’s largest island, was hit not only by the dust but by gale force winds as well. The storm was strong enough to knock over a large eucalyptus tree onto a passing van, killing the 64-year-old driver.

Dust storms are a somewhat regular occurrence in Greece, particularly in the springtime. Strong winds can pick up Saharan dust and carry it for thousands of miles — sometimes reaching as far as the United Kingdom. Since 2014, the Barcelona Dust Forecast Center has released comprehensive forecasts for sand and dust storms covering Northern Africa, the Middle East, and Europe.

Sand and dust storms are a natural meteorological phenomenon, although that part of the world is seeing more of them thanks to global warming, land conversions, and agricultural practices that lead to desertification and drought. Breathing dust-laden air can trigger asthma and allergy attacks, and aggravate existing respiratory issues. Over time, dust particles can damage sensitive lung tissues and result in chronic breathing problems.

They can also spoil a view (or enhance it, depending on your perspective.)

More like this
Science
Jan. 26, 2023
An asteroid will come within 2,200 miles of Earth tonight — here’s why you shouldn’t worry
By Jennifer Walter
Science
18 hours ago
Look: Astronomers Find a Potentially Habitable Exoplanet With a Violent Past
By Kiona Smith
Culture
16 hours ago
A Lot of ‘80s Sci-fi is Dated. Videodrome Feels More Relevant Than Ever.
By Chrishaun Baker
LEARN SOMETHING NEW EVERY DAY.
Share: