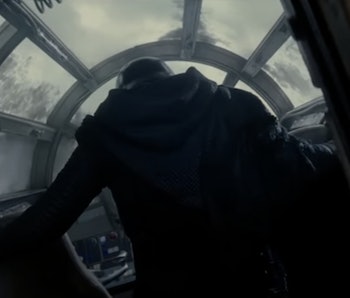 Today, Disney let loose the trailer for the deleted scenes reel from the forthcoming Blu-Ray editions of the blockbuster film. Though its short and sweet, there’s a few lines of dialogue from Han Solo and Maz Kanata, some shots of Rey pondering something, and an extended cut of Kylo Ren glowering inside of the Millennium Falcon. We assume he’s upset because Han has removed his child safety seat from the cockpit, but can’t be sure.

He’s in that baby, alright! It’s like fan fiction you didn’t even have to bother making up. Presumably, that scene involves Ren checking out the Falcon after it’s landed on Starkiller Base, though that may not make a lot of sense — it kind of reeks of the whole “Darth Vader, for some reason, decided to walk around the Rebel Hoth base despite the fact that, in doing so, he was making the biggest possible military mistake in history” but I guess its cool in theory. Deleted scenes are just one of the many features that the physical discs will include, but here’s to hoping that’s theres a lot more to unpack when everyone hands over more money to Disney.

More like this
Innovation
8.10.2022 9:00 AM
Scientists may have revealed the ancient secret behind China’s Bronze Age
By Sarah Wells
Science
8.10.2022 3:00 PM
Asteroids may have carved Earth's landforms as we know them — study
By Doris Elín Urrutia
Innovation
8.4.2022 11:00 AM
X-Ray study adds to the mystery shrouding shrunken heads’ origins
By Sarah Wells
Related Tags
Share: