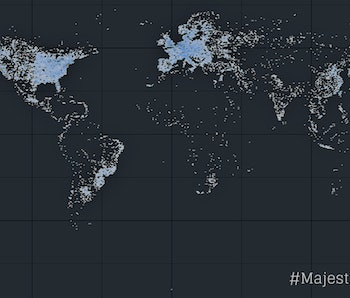 The two frontiers of modern life, space and the internet, are set to join about 250 miles above Earth’s surface.

A 3D printer designed to work in zero gravity launched to the International Space Station (ISS) aboard an Atlas V rocket from Cape Canaveral Tuesday night and will soon print a visualization of the internet in space. Made In Space, Inc. produced the printer and is partnering with Majestic.com, a specialist search engine, to create a landscape showing how the web all links together. If all goes well, the visualization will likely be the first commercial product ever manufactured in space.

The printer will build the internet landscape on the basis of Majestic’s analysis of the web’s functionality. The company’s technology analyzes all the links across the entire internet and assigns them scores based on their trustworthiness. Reliable sets of connections form “galaxies” that Majestic hopes to represent physically. The task is daunting, as only NASA knows, because there are currently more links on the web than stars in the Milky Way Galaxy.

Back in 2014, Made In Space sent the world’s first 3D printer to space. The 3D Printing in Zero-G Technology Demonstration performed a series of tests to determine how zero gravity affects 3D printing. The mission culminated with the manufacture of Dr. Cagle’s Buckle, a device that helped astronauts distribute lactic acid built up in their bodies after exercise. The printer used rubber already aboard the ISS so the buckle did not have to be able to resist launch forces.

Today, Majestic is just hoping to bring attention to their technology’s ability to scour the web, while Made In Space simply seems happy to have more business. So, the final product may be cool, but it isn’t going to change the world or make it easier to push the final frontier. The mission is a classic commercial partnership, just like the ones we have here on Earth. But maybe it is a sign of how far we’ve come — space-based publicity stunts have always been inevitable, and now their day has come.

More like this
Innovation
Jan. 23, 2023
These 5 futuristic tech ideas could help us explore distant worlds
By Jennifer Walter
Science
Feb. 1, 2023
65 Years Ago, America Launched Its Most Pivotal Space Mission Ever
By Jon Kelvey
Science
Jan. 25, 2023
40 years ago, NASA launched the space telescope that proved JWST could work
By Jon Kelvey
LEARN SOMETHING NEW EVERY DAY.
Related Tags
Share: