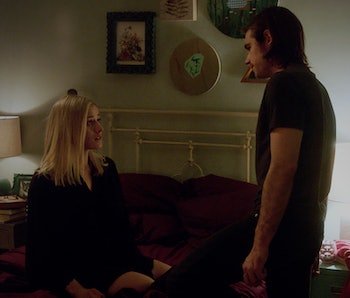 Who knew there would be so much magic in The Magicians? After last week’s genre-heavy and purposefully dour episode, “The Writing Room” — with its hero- worship tragedies and hints of child abuse among the Chatwin siblings — this week’s episode, “Homecoming,” offered a distinctly lighter touch. But that doesn’t mean it was skippable. The Magicians has struggled to balance much needed character development with plot, and while it didn’t stick the landing, “Homecoming” managed to do both in this enjoyable, semi-filler episode.

We’re chock full of narrative threads of the Brakebills squad this hour, both important and not.

Julia (Stella Maeve) is still off with her new recovering magicians group and unintentionally meeting up with Kady (Jade Tailor). It’s a questionable addition that is most likely the vestige of a book plot line that seems to function only to remind us that Julia is still mopey and attempting magic. Kady and Julia seem to reconcile, but their scenes interrupt the episode’s action and are as borderline incomprehensible. What narrative function does completing the book of spells have again?

Meanwhile, a drug-addled Eliot (Hale Appleman) and Margo (Summer Bishil) embark on a seemingly meaningless comic-relief subplot to confront Margot’s ex about draining her life force via a sex doll doppelganger the pair affectionately dub a “Margo-lem.” It’s funny and all — and a spin-off sitcom involving the two wouldn’t be out of place after The Magicians is over — but we’re still going nowhere with them. If anything, we get the sense that Eliot is still broken and trying to cope with Mike’s death in all the wrong ways. But its relation to the Margo’s golem seems misplaced even if we get a great little moment of Eliot mistakenly being vulnerable with the Margo-lem instead of the real thing.

But the best scenes of the episode involve Penny (Arjun Gupta), Quentin (Jason Ralph), and Alice (Olivia Taylor Dudley), the show’s charismatic and fascinating trifecta of magicians. After last week’s cliffhanger, Penny suddenly finds himself trapped in an interdimensional traveler hub called the Neitherlands. Stuck there without his traveler powers to save him, it’s up to Quentin and Alice to get him back with — you guessed it — sex magic. It forces Alice and Quentin to the Chicago suburbs for the most awkward homecoming ever as the pair soon find themselves in the middle of a magical bacchanal thrown by Alice’s idiosyncratic, self-righteous parents.

The Chi-town trip to Alice’s house to meet her folks and get some information from a secret traveler they know was obviously done for the narrative sake of saving Penny from a purgatory that looks like a leftover Game of Thrones set. But it also triply helped Alice open up as a character to herself, Quentin, and the audience.

By the show’s third episode we said Alice was the best character on The Magicians, and we stand by it. Dudley has played Alice with a removed cautiousness, and the reveal that her flippant, sexually open parents that accept the absurdity of their son’s disappearance points to a skewed homelife that has shaped her into her time at Brakebills. There’s a reason she’s reluctant with, well, everything, and now we know.

The plot twist about the two needing to orgasm simultaneously to somehow call Penny back via magic is a bit absurd, but when we do reach the literal climax of the episode it’s obvious that Quentin and Alice come to a better understanding of each other’s faults through this inherently awkward magical ritual.

The show has been successful at trying new things, and now it’s finally successful at patiently teasing out new developments. If the previews for next episode are any indication, it’s patiently waited to reveal the Beast. The anticipation is killing us.

More like this
Entertainment
19 hours ago
The Boogeyman Trailer Delivers a New Take on Stephen King's Monster Under the Bed
By Dais Johnston
Entertainment
23 hours ago
In Infinity Pool, Brandon Cronenberg Puts Alexander Skarsgärd Through Hell
By Isaac Feldberg
Entertainment
Jan. 28, 2023
Where and how to watch the 2023 Oscar nominees
By Mónica Marie Zorrilla
LEARN SOMETHING NEW EVERY DAY.
Related Tags
Share: