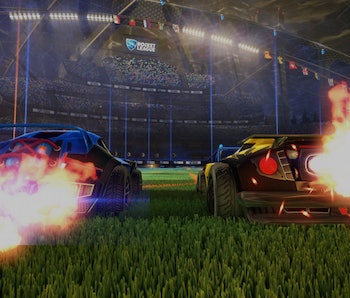 In one of the gaming industry’s most surprising announcements of the last decade, Microsoft reported last week that it will be supporting cross-network play on both Xbox One and Windows 10 alongside their cross-platform games that use Xbox Live. This basically means that Xbox One and Windows 10 users will be able to play online with gamers from different online multiplayer networks — including other consoles and PC distribution platforms like Steam.

Microsoft has just opened the floodgates to an era that gamers have been waiting years for: When it may be possible for PlayStation, Xbox and PC owners to all game collectively, regardless of what platform they purchase their video games on. Honestly, I didn’t think we would ever see the day.

But there are limitations, and odds are, competitors will find a way to sabotage things. Call me a skeptic, but I just don’t see companies permitting all that sales competition.

The only real restriction is that game developers have to make the decision to support the cross-network feature — meaning, unless Activision wants to you play Call of Duty with your PlayStation friends, it’s not happening. I understand this decision from Microsoft’s standpoint, because it’s basically voiding them of all responsibility when it comes to cross-network play. It’s no secret that the gaming community is a passionate group of people — if they get upset that they can’t play Call of Duty with their PlayStation friends, well, it’s Activision or Sony’s problem.

It’s a smart play by Microsoft and so far, it seems like the right one considering Sony’s response issued to GameSpot:

“PlayStation has been supporting cross-platform play between PC on several software titles starting with Final Fantasy 11 or PS2 and PC back in 2002.”

“We would be happy to have the conversation with any publishers or developers who are interested in cross platform play.”

While Sony does seem open to the idea, it will be interesting to see how things develop once conversations surface about cross-network play between developers.

The important thing to remember is that Microsoft and Sony have been rivals for years in the gaming industry. Each have worked to develop the best console for generations and achieve more sales than the other. There’s nothing wrong with that, because in the video game industry, competition is positive: it pushes companies to improve their products, giving us all a better console experience in the process.

But when it descends into childish jokes at press conferences and conventions, it’s downright embarrassing. I dont think Ill ever forget when Sony made a commercial for the PlayStation 4 about sharing games in response to Microsoft’s idea of digital sharing in an effort to up pre-orders on their system.

Sure, it’s hilarious, but it’s this sort of thing makes me worried cross-network play may never be achieved. I mean, even now I can anticipate Sony’s childish, “We did it first” statement.

We’ve had the “console wars” concept looming over the gaming industry for too long. The problem here is that instead of asking companies like Microsoft and Sony to produce a better console, the gamers are die-hard one way or another and gladly accept whatever their favorite company provides — which isn’t healthy.

It’s safe to assume that cross-network play would eliminate the “exclusive downloadable content” nonsense, since everyone is going to be playing simultaneously with their friends, on different systems. I know it’s a long shot considering how integrated this type of content has become with this console generation, but it’s still an issue that may arise, and companies would have to address it.

It’s obvious that every game won’t be supporting cross-network play, especially when it comes to console exclusives like Quantum Break and Uncharted 4: A Thief’s End, but cross-network gaming is a huge step in the right direction for the gaming industry becoming unified as a community. This is why it’s so important for gamers, regardless of their console of choice, to support it entirely. Just imagine if the game’s multiplayer population lasted twice as long, kept servers live, and if you and a buddy could play together. Or imagine if your Steam friends could join you on Xbox One games.

Cross-network gaming is an open online world for the industry, and it’s one of the first truly next-generation concepts of this console era. So let’s make it happen.

More like this
Gaming
4 hours ago
12 more intriguing games coming to Xbox Game Pass in May 2022
By Robin Bea
Gaming
5.12.2022 6:50 PM
Everything you need to know about Starfield
By Joseph Yaden and Mike Bloom
Gaming
5.12.2022 5:56 PM
Starfield delay is the best news about the game yet
By Robin Bea
Share: