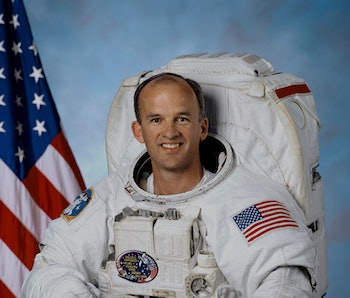 When NASA astronaut Jeffrey Williams launches into space later today, it’s a safe bet that he will be praying to God for a safe trip to the International Space Station. Literally. Williams is a devout Christian who has authored a book, The Work of His Hands, about how his time in space has deepened and affirmed his religious beliefs.

“There is a generalization that anyone who worked for NASA, or an organization like that, would naturally be an atheist, but that’s not true,” Williams told the Institute for Creation Research in an interview last year. “There are many Christians in the organization, many Christians in other government agencies — there are Christians everywhere. The work that I do and have done through my military career and with NASA has been perfectly compatible with the Scriptures, and I’ve lived out my life as a Christian, and there’s been no issue there.”

Williams wasn’t always uber-religious. For the first seven years of his marriage, he was secular, he told the Grace To You radio show. But in the midst of a marital crisis, and while Williams was out of town for flight training, his wife became a Christian. Upon his return, he did, too, and it saved their marriage. “We work hard sometimes at trying to defend the faith and defend the Bible and the truth of God and all of this, but in the end, and I’ve seen it again and again, I’ve seen it with staunch lifelong atheists, all of a sudden there is this amazing awakening to the truth of Scripture,” he says. “And I really believe that is the work of God.”

Anyone who believes that science and religion are fundamentally incompatible hasn’t talked to enough scientists about religion or enough religious people about science. But it’s an easy assumption on the part of folks in both camps that there is a clear divide. Seeing a person like Williams, who is so entirely invested in both science and religion, shakes preconceptions of the logic of the world a wee bit.

Human brains are incredible organs, capable of miraculous feats of logic. Where an atheist scientist sees the random and chaotic unfolding of events, a religious scientist sees the hand of God. For Williams, spotting an Alaskan volcano from the ISS at a moment when he felt particularly down wasn’t a result of lucky coincidence, it was the answer to his wife’s prayer that something happen to bring him out of his funk. The volcano, on the other hand, was a product of geology (which in turn was a product of divine will).

When it comes to creationism, Williams has said that “science is compatible with the biblical account.” There are many different ways to make that argument, but suffice it to say he’s settled on one of them.

If Williams’s religious beliefs have ever hurt his ability to perform his job as an astronaut, there’s no evidence of it. Today’s launch is his fourth space flight, and he has logged 362 days in space. This trip also includes astronauts Timothy Kopra, Timothy Peake, Yuri Malenchenko, Alexey Ovchinin, and Oleg Skripochka. The crew will research the impacts of time in space on muscles and bones, among other things. No spacewalks are currently planned. June 5 is the mission end date.