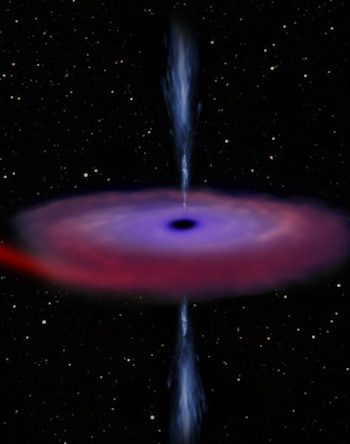 Continuing in the hoary tradition that all black hole research must be gnarly, a new study from an international team of astronomers details what happens when solar matter is violently expelled, almost at the speed of light, from an accretion disk. In June 2015, researchers spied unusual activity at the black hole V404 Cygni — which astronomers call an “outburst,” as though the black hole was throwing a little tantrum and not spewing flares of X-ray radiation into the cosmos.

In an artist’s rendition, the quasar tantrum plays out sort of like the The Force Awakens’ Starkiller Base laser-charging scene, though physics is less greedy than space Nazis when it comes sucking the life out of a sun:

“These jets are extreme phenomena, with matter moving at close to the speed of light and travelling far out into the galaxy in a narrow ‘pencil beam’,” writes the University of Southampton’s Poshak Gandhi in an email to Inverse. Gandhi and his colleagues published their findings Tuesday in the journal Monthly Notices of the Royal Astronomical Society.

The pulses were simultaneously a thousand times brighter than our sun and incredibly quick, emitting from the hole for only a fortieth of a second. In comparison, a bullet fired from a .30-06 rifle would travel a mere 60 feet during each flash. Without advanced imaging — in this case, the William Herschel Telescope Ultracam, located at the Canary Islands — we would have never caught a glimpse of the jets.

V404 Cygni is remarkable not only because it’s the first black hole in the Milky Way we were able to locate. Because the black hole is so close to a star, astronomers consider this a binary system. The system’s a relatively short distance away, as these things go — only 7,800 light years from Earth (the Milky Way, for reference, is an incomprehensible 100,000 light-years in diameter). Still, it’s tough to get good images of this sort of black hole phenomena.

“Obtaining such data has been very difficult in the past,” Gandhi says. “This is because black hole outbursts are unpredictable, and usually have very short durations. So when an outburst occurs, astronomers have very little time to react.”

The scientists found “strong changes from one night of observation to another,” Gandhi says, “with the red flashes appearing at some times and not at others. In effect, we are seeing the switching on and off of these steady jets.” As the star more rapidly slurped down into the black hole’s gravitational pull, the excess spat out in red flashes (the red color, the astronomer says, is a “signpost” of jet activity).

Though the rate of black hole discoveries is increasing as we improve our interstellar imaging techniques — in February, NASA spotted a black hole in a distant galaxy blasting out a jet of energy longer than the Milky Way’s diameter — there’s still plenty we don’t know about black holes. Why, for instance, doesn’t Cygni constantly spew out matter at a consistent rate of speed, instead opting for what the astronomers call a “feeding frenzy”?

“For some reason, the companion star dumps more matter on to the black hole at times, then this rate of dumping changes (for reasons not fully understood). This causes the rate of the black hole growth, its emitted power, and its ejected matter, to all change with time,” Gandhi says. “There is likely some physical instability.” But the specific reason remains a mystery.