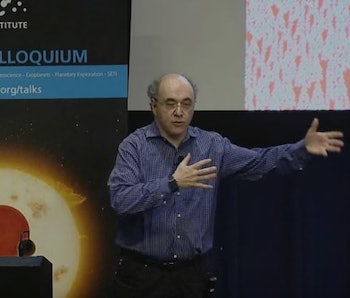 Stephen Wolfram, the inventor of the mathematical programming system Wolfram Language, thinks there might be intelligent life, of a sort, in the digits of pi. He spoke recently at the SETI Institute about what his “principle of computational equivalence” means for non-human intelligence — check out the heady hour-and-a-half lecture below.

The key thread running through his concept is that simple rules underpin complex behavior. For Wolfram, the pigmentation patterns on a mollusk shell, for example, aren’t necessarily the outcome of deliberate evolutionary forces. “I think the mollusk is going out into the computational universe, finding a random program, and running it and printing it on its shell,” Wolfram says in the lecture. “If I’m right, the universe is just like an elaborate version of the digits of pi.” (There is some debate, of course, over just how right Wolfram is — though you won’t really get that from the lecture.)

To show how this simplicity-begetting complexity relates to aliens, Wolfram draws from the end of Carl Sagan’s Contact. Spoilers (for a book): after communicating with the alien intelligence, astronomer Ellie Arroway finds in the digits of pi an image of a circle. She takes it as a sign of intelligence baked into the universe. Because the digits are both random and infinite, this also means that within pi “combinatorially there exists the works of Shakespeare and any possible picture of any possible circle,” Wolfram says.

He then pushes Sagan’s circle picture example further. “Could there be extraterrestrial intelligence lurking in the digits of pi?” Wolfram doesn’t really mean gray Martians, but the idea of intelligence as something meaningful coming from a simple rule (the mathematical reason why pi exists). Although even Wolfram struggles to articulate exactly what that would look like. “I don’t think I’m explaining that very well,” he says. Luckily, the rest of the talk is stuffed with detail, which you should check out if you’re into the intersection of mathematics and the murky line between intelligence and computation.

More like this
Science
Jan. 30, 2023
Astronomers Use a New Method to Identify Eight Candidate Alien Signals
By Kiona Smith
Entertainment
Feb. 3, 2023
Knock at the Cabin's Ending is Shyamalan's Most Surprising Twist Yet
By Eric Francisco
Entertainment
22 hours ago
Rick and Morty Season 7 Needs to Steal the Best Doctor Who Trick
By Corey Plante
LEARN SOMETHING NEW EVERY DAY.
Share: