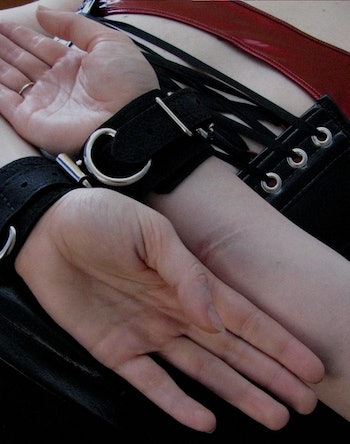 A ]wave of fetish-related Google searches followed the most recent episode of 11.22.63, after a scene introduced a form of masochism involving genitals and a clothespin. It was weird. But how weird was it, really?

The holy bible of judgmental psychiatric boards everywhere — the Diagnostic and Statistical Manual of Mental Disorders, Fifth Edition (DSM-5) — defines “paraphilic” sexual interests as unusual or anomalous. But the basis for those judgments isn’t exactly clear.

In an article published this week in The Journal of Sex Research, researchers asked: Is something actually unusual if a lot of people do it?

To find out, the team from University of Quebec at Trois-Rivieres and Philippe Pinel Institute of Montreal took to computer screens and phone lines of Quebec, surveying a sample of 1,040 people. Classified according to factors like age, gender, religious affiliation and education, the group was thought to represent the province’s norms.

The researchers probed participants’ interests in the eight paraphilic behaviors listed in the DSM: voyeurism, exhibitionism, frotteurism (touching or rubbing against a non-consenting individual), masochism, sadism, pedophilia, fetishism (technically, using nonliving objects or having a highly specific focus on non-genital body parts), and transvestic disorder (engaging in sexually arousing cross-dressing to the point of distress or harm).

Because the authors focused only on the behaviors themselves — not the way in which people engaged in them — it’s especially important to note the difference between a paraphilic behavior and disorder. Paraphilias aren’t considered mental disorders — they’re simply sexual preferences for “unusual” behavior — and paraphilic behavior is only engaged in from time to time. Yet paraphilic disorder, by definition, involves non-consenting partners and causes suffering or confusion.

Of all of the random Quebecois surveyed, almost half expressed interest in at least one type of paraphilia, and about one-third had actually acted on those desires at least once.

Interest in voyeurism, fetishism, frotteurism, and masochism, in particular, was high enough — at 15.9 percent of both men and women surveyed — to be considered “statistically unusual.”

Oddly — or perhaps not — masochism was significantly linked to a more satisfying sex life. Although men were generally more interested in paraphilic behavior than women, the authors point out that women who were interested in sexual submission were actually more drawn to more diverse sexual interests.

It’s time to reassess how we define normal and anomalous sexual behaviors, the authors write. Labeling paraphilias as abnormal, when they aren’t in the practical sense, could stigmatize and shame when it’s unnecessary — which is something the DSM has more than enough experience with.

Lest readers think the Quebecois are simply a rarefied, sexually liberated bunch, the authors point out that they “have reasons to believe that this study’s results which are based on Quebec’s population can be applied to the population of North America and Europe as well.”