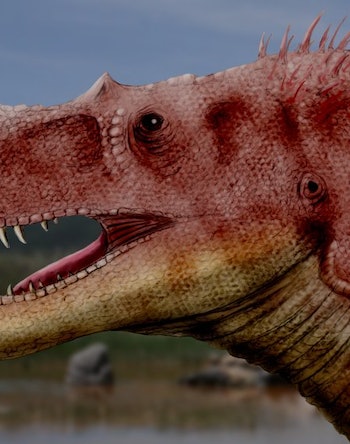 Nobumichi “Nobu” Tamura might have a more complete picture of prehistoric Earth than anyone else on the planet — he’s the one drawing it. Though Tamura is no paleontologist — he’s in charge of a super powerful x-ray microdiffraction machine at the Berkeley National Laboratory — he’s a prolific paleoartist. If you’ve ever googled an obscure dinosaur species, there’s a good chance that Tamura is the reason you know what it looks like. The man owns dino-Wikipedia.

“I was interested in dinosaurs and other prehistoric creatures since my childhood,” he tells Inverse. When Wikipedia started getting big, Tamura naturally started browsing the dinosaur pages. The were devoid of illustrations. “Maybe I can do something about it,” he recalls thinking.

Tamura started drawing the creatures and submitting the pencil illustrations to Wikipedia. “The first drawings were not really successful, because I just drew the dinosaurs like I saw them when I was a kid,” says Tamura. “They weren’t quite accurate.” They were imprecise enough that his early drawings were rejected by Wikipedia editors and removed from the site.

Rather than giving up or finding a new hobby, Tamura just worked harder and smarter, soliciting feedback from Wikipedia editors on how he could better render extinct reptiles. He looked up the latest scientific articles describing the species he was working on started sketching. He got better.

To date, Tamura has illustrated 1,500 dinosaurs and other prehistoric animals. That’s an impressive rate of one drawing almost every other day — he estimates that each one takes three or four hours on average. Most are available on his website, where they are licensed under Creative Commons.

A lot has changed in how we understand what dinosaurs would have looked like since he was growing up in the ‘80s, says Tamura. For example, we now know that many species were covered in feathers. “Dinosaurs would look much more like birds than reptiles,” he says.

“They were not dragging their tails on the floor like the old representations of dinosaurs. They were not living in swamps — they were active animals. I had to adapt to the new research and the new understanding of dinosaurs.”

Tamura’s own understanding of and appreciation for the prehistoric world has evolved, too. “When you are a kid, basically you are really fascinated by the big ones — the most ferocious ones. You basically see them as monsters. But now I see them as weird animals that lived a long time ago. The more we know about them and the more we learn — they were not just monsters but they were animals that really looked like animals today.”

Part of the reason for that is a concept called convergent evolution — which describes how unrelated species can evolve to appear more similar over time if they live in similar environments. The most prominent modern example of this can be seen in Australia, where various marsupial species have evolved traits similar to placental mammals, despite their genetic separation.

“You have all these dinosaurs that probably would have looked like modern cattle — just bigger,” says Tamura. And the ocean would have held ancient species that look strikingly like today’s dolphins, to give another example.

Now, it’s not the prehistoric monsters that capture Tamura’s attention so much as the weird, obscure creatures of the distant past. “People tend to depict always the same animals — the T-Rex, the Diplodocus and so on — there are some that are very popular right now. But when you search you find that there is a whole world. There are some really unusual creatures that you’ve never heard of.”

Among his favorites are the armored fish from the Devonian period, he says. “They look like characters from Pokemon or something.”

The pace of discovery in paleontology has accelerated in recent decades, says Tamura. Scientists aren’t just collecting and describing fossils — they’re using biomechanical analysis to reconstruct how dinosaurs would have stood and moved around. And advanced techniques are telling us more about the feathers and other soft tissues that would have covered the animals, including pigmentations.

But there will always be mysteries, says Tamura. “The fossil record is always biased towards coastal animals, for instance,” he says. We rarely get fossils from jungle and mountain environments, so big pieces of the puzzle are likely missing forever. “There might be some entire groups that we’ll never know anything about.”

And even among the creatures that have left fossils behind, the mysteries are great. “There are a lot of enigmatic fossils, that we don’t know what they are,” he says. So the discoveries will continue to roll in, and Nobu Tamura will be there, to help interpret for the rest of us what this planet might have been like hundreds of millions of years ago.