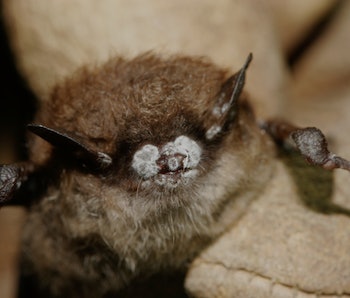 Asian bats have developed resistance to the white nose syndrome that is decimating bat populations across North America, according to a new study. The researchers surveyed five sites in China and five in North America and found that the Asian bats displayed lower rates of infection.

“Uniformly, across all the species we sampled in China, we found much lower levels of infection — both the fraction of bats infected and the amount of fungus on infected bats were lower than in North America,” said the study’s lead author Joseph Hoyt, a graduate student at UC Santa Cruz.

White nose syndrome causes a characteristic white fungus to grow near the nose of infected bats. It causes bats to awake from their hibernations early, thereby using up their fat supplies and dying en masse from starvation and the cold. As many as six million North American bats have died from the disease since 2006.

The fungus that causes the disease Pseudogymnoascus destructans spread to North America from Europe, but the study raises the possibility that Asian bats have long faced exposure and even built up a resistance over the years. Many European bats have also developed resistance, raising the possibility that North American populations may be able to survive the disease within several generations.

Disease-resistant bats may be able to pass on their inherited resistance if researchers were to mate American and Asian or American and European bats. Genetic engineering of this type involves myriad risks, so for now this study simply allows scientists to better understand the problem in North America.

The researchers identified certain species of North American bats that are already demonstrating wider variability in their response to the white nose fungus, suggesting that certain genes have begun combatting the syndrome. On the other hand, some bats in North America don’t seem to stand a chance.

“The northern long-eared bat suffers really high fungal loads, and nearly all individuals are infected, there’s no overlap with the Asian species,” co-author Kate Langwig told the BBC. “From previous work, we’ve seen their populations crashing toward extinction, so it could be a poor omen for that species.”

As for what exactly works though, the researchers have not nailed down what causes resistance and at this point are desperate for anything.

“It doesn’t have to be the same strategy for every species, it could be differences in the skin microbiome in one and hibernation behavior in another,” said Langwig.

More like this
Mind and Body
6.15.2022 12:00 AM
The right time to make a decision may depend on this overlooked biological factor
By Jocelyn Solis-Moreira
Innovation
6.27.2022 9:28 PM
The 6 best MacBook Pro stands
By Vanessa Spilios
Innovation
6.19.2022 6:04 PM
47 popular home upgrades people are making that are under $35 on Amazon
By Christina X. Wood
Related Tags
Share: