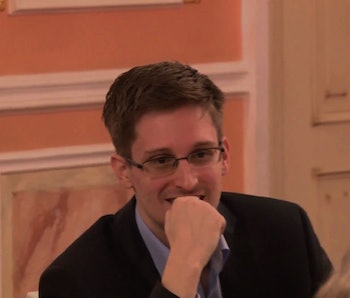 In preparation for the release of his new movie Snowden, Oliver Stone, the film’s director, has been meeting Edward Snowden over the past year at the leaker’s home in Russia. During the encounters, Stone discovered that Snowden has been “working on some kind of constitution for the internet with other people,” he told The Hollywood Reporter.

Stone did not provide additional details about what kind of Constitution Snowden has been working on, and it’s impossible to know whether the plan in its current stage will turn into anything substantial. But given Snowden’s high profile, which will only grow with the release of Stone’s film in September, any effort to unite nations behind a central compact of behavior on the web will likely prove consequential.

Even if the world’s nations do not adopt the compact — considering many Americans still view Snowden as a traitor, it seems likely that the United States would — an internet Constitution could help guide current and future generations of advocates for an open internet. Much like how John Perry Barlow’s 1996 Declaration of Independence for the web laid out concerns about the role of government in regulating the digital world, a Constitution could put down real legal and moral ideas about how the relationship between governments and the the internet should develop.

However, Stone’s interview also reveals just how much of a pariah Snowden remains to many in the United States. While the story of discovering and leaking highly classified NSA documents and then fleeing to Hong Kong and eventually Russia is undoubtedly compelling, Stone failed to find funding for the movie in the United States.

Eventually, French and German investors came through, but even then, he decided it would be best to do the actual production in Germany, not the United States.

“It’s a very strange thing to do [a story about] an American man, and not be able to finance this movie in America. And that’s very disturbing, if you think about its implications on any subject that is not overtly pro-American,” Stone said. “They say we have freedom of expression; but thought is financed, and thought is controlled, and the media is controlled.”

The movie will also go deeper into Snowden’s backstory to try to expose the motivations and goals of the person Americans view as either a whistleblower or a traitor, Stone says.

“Here’s a young man, 30-years-old at that time, and he does something that’s so powerful. Who at 30-years-old would do that, sacrificing his life in that way?” Stone said. “I think he’s a historical figure of great consequence.”

More like this
Entertainment
6.25.2022 12:30 PM
'Rings of Power' video sets up the return of Tolkien's most underrated creatures
By Alex Welch
Entertainment
6.21.2022 1:00 AM
Game of Thrones sequel could ruin the best part of the series finale
By Alex Welch
Gaming
6.26.2022 6:00 PM
Game devs reveal 8 "extremely hacky" secrets behind Elden Ring and more
By Willa Rowe
Related Tags
Share: