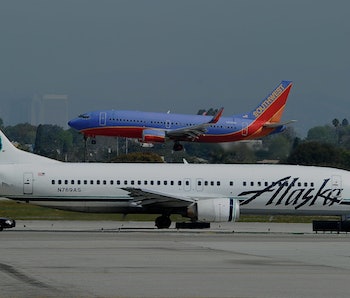 Alaska Airlines flight 870 from Anchorage to Honolulu on March 8 sold out quickly. Joe Rao, an associate astronomer at the American Museum of Natural History’s Hayden Planetarium, bought his ticket almost a year ago, after he realized that the non stop flight would come oh-so-close to the tail end of a total solar eclipse on Tuesday afternoon.

Oh-so-close wasn’t good enough for Rao, who was still jazzed about seeing the previous eclipse, on March 20, 2015. Rao’s need for astronomy eclipsed all other desires, so he decided to force Alaska flight 870 to change its course. Fortunately, instead of doing something drastic like attempting to hijack a commercial airliner just to watch an astronomical phenomenon, Rao just called the airline. Alaska had a full year to change its flight path, and Rao came prepared, and with backup.

His friend, Dr. Glenn Schneider (who has 32 eclipse-notches on his belt and will be watching this one live in Indonesia) of the University of Arizona’s Steward Observatory, worked out a number of suggested flight plans, which Rao laid out for Alaska Airlines. Alaska’s director of onboard brand experience Chase Craig took the ball and passed it to Captain Brian Holm, their fleet director. Holm and his team pushed flight 870’s departure time back 25 minutes, and made sure all of the wheels were in motion for the final day. On Tuesday, catching the eclipse will be up to Caption Hal Andersen, who is in touch with Oceanic Air Traffic Control.

“The key to success here is meeting some very tight time constraints – specific latitudes and longitudes over the ocean,” Andersen said in a statement. “With the flight management computer, it’s a pretty easy challenge, but it’s something we need to pay very close attention to. We don’t want to be too far ahead or too far behind schedule.”

Flight 870 will hit the eclipse’s 68 mile wide, 500 mile long shadow about 695 miles north of Honolulu. At 5:35 p.m., passengers should get a solid 1 minute and 53 seconds of complete eclipse, before the sun comes back out from behind the moon.

Word spread quickly around the eclipse-hunting community, who call themselves “umbraphiles,” after Rao got Alaska on board for the solar-event-flyby. Seats quickly started to fill up. Mike Kentrianakis, solar eclipse project manager for the American Astronomical Society is in seat 6F, and Craig Small, a semi-retired astronomer from the Hayden Planetarium is right behind him in seat 7F. Small has seen 31 total eclipses — every single one in his lifetime — and is bringing his lucky eclipse flag, which has gone with him on every eclipse hunt, like this one in 2009, since 1973.

“I’m not one for hyperbole, but you don’t just see an eclipse, you experience it with every fiber of your being,” Small told Alaska Airlines. “It is the most spectacular naturally occurring event that anyone could witness in their lifetime.”

The list of eclipse watchers goes on: Dan McGlaun (seat 8F) is bringing 200 pairs of tinted glasses for everyone on the plane, and Evan Zucker (seat 1F) and his wife Paula Eisenhart (2F) have “Here Comes the Sun” queued up to play as the eclipse is ending.

But if you didn’t manage to snag a seat on Alaska 870, you don’t have long to wait. The next eclipse, on August 21, 2017, is the first total solar eclipse to sweep across the width of the United States. The “Great American Eclipse” hasn’t happened since 1918, and you should be able to see it without changing the entire trajectory of a plane. You can also stream Tuesday’s eclipse on NASA TV, which will be broadcasting live from Indonesia. And if all else fails, we hear Joe Rao has some pull with Alaska.